Fur traders and explorers were the first white people to come to Alberta. Explorers came by canoe to see what lands lay west of the Great Lakes. Traders came to trade with the Indians for beaver pelts which were needed in Europe for making beaver hats.

The fur trade began in eastern Canada almost four hundred years ago. Over the years, the traders gradually moved westward looking for more furs. By 1800 several trading posts were set up in the land that is now Alberta.

The Indian people offered the white men food and shelter, and taught him many skills that were necessary to live in the wilderness. The Indians showed the white trapper how to make canoes , moccasins, and snowshoes. They taught him the best ways of trapping and hunting. 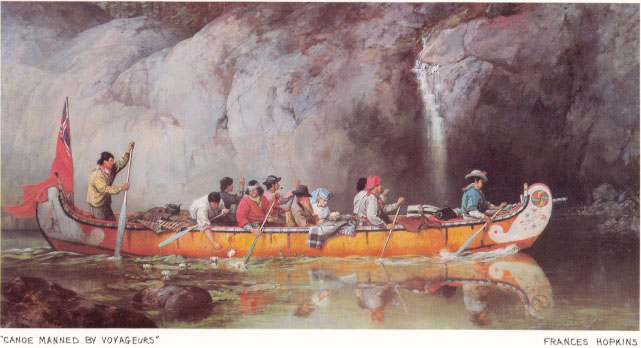 The early fur traders set up posts in many places. Three of the most important fur-trading posts were at Fort Chipewyan in the north, and Rocky Mountain House and Fort Edmonton in central Alberta. These were very good locations. They were easy to get to by boat or canoe.

This was very important at a time when the rivers were the only roads.

The early fur traders journeyed to Alberta from Montreal and from York Factory. The journey was long and dangerous. The voyageurs sometimes paddled their canoes for as long as twenty hours a day. They wanted to get to the end of their joumey before winter came. Where the rivers were too fast or there were too many rapids, they had to make portages. A portage is a place where canoes and supplies must be carried overland.

The North West Company competed with the Hudson's Bay Company for the fur trade.