1977 was a busy year for the Elk Point Historical Society. It was a year of deadlines to be met. It was the year of "The Book" which had to be completed and in the hands of the public before Christmas. All of us worked toward that magic moment when we would see the result of our efforts in print.

By 1977, quantities of material had been received and much more was flowing in---family histories, over 2000 pictures and, documents, reports from local organizations, and local historical articles. Pictures and documents had to be sorted and labelled, and articles typed. Much of our typing was done by volunteer typists Gladys Flanders and Sandra Holthe. By April the acÂ­cumulated material was in its final stages, ready for submission to our editor, Mary Bennett, who went over it all and then sent it on to Inter-Collegiate Press in Winnipeg for printing.

Other areas heard of our undertaking and became interested. In June, Ila Borowsky was invited to speak at the annual meeting of the Ladies of Unifarm held at Warspite. A group was interested in preparing a historical record of Waskatineau and district and wished to learn of the steps taken by the Elk Point Historical Society in the preparation of Reflections.

On August 3 we received the galley sheets from Winnipeg. These were the first printed copies of our material which we used for the mock-up of the book. Doing the mock-up consisted of cutting and pasting the copy and pictures, page by page, until all 464 pages were completed. It took two and one half weeks of steady and exacting work for the following persons to complete this- Mary Bennett, Sidney Holthe, Ila Borowsky, Lawrence and Bea Sumpton, Muriel Holthe, Bea Williams, Nellie Merrick, Sherry Pelech, Anna Warren, Myrna Fedorus, Joyce Babcock, and Paul Stepa. Ralph Kryvenchuk was the artist for the liner of the front and back cover pages. Mary Bennett now edited these sheets, organized the book and index, did the art work on the front cover and division pages, then forwarded all to Inter-Collegiate Press.

While awaiting the next step we distributed 1000 brochures across Canada and the United States adÂ­vertising our book.

The Van Dykes arrived November 3. These were the loose pages of the book, complete with pictures. These, in turn, required a final editing. To do this a trip to Warburg was necessary and the following persons spent two days there with Mary Bennett to complete this- Lawrence and Bea Sumpton, Nellie Merrick, Sydney and Muriel Holthe, and Ila Borowsky.

The copy, complete and edited, was forwarded to Winnipeg and we had only to wait for the books to be delivered in November (we were told). In the meantime we had decisions to make. We planned dedication ceremonies to coincide with the arrival of the books-- speakers, program, and the auction of the first book off the press.

In the meantime, on November 5, 1977, Sidney Holthe, Mary Bennett, Martin Aarbo, Ila Borowsky, and  Lawrence and Bea Sumpton attended Elk Edmonton where we made apresentation. We informed those present of the work of the society in preparing the Elk Point history book, the size of the book, apÂ­proximate cost, advance orders, delivery date, points of distribution, and future plans. This was well received. As a door prize the Elk Point Club gave a voucher for one copy of Reflections.

But the "best-laid plans" often go astray and ours were completely upset. Our books did not arrive until December 21st! The book went on sale immediately and dedication ceremonies were postponed until January. Books had to be mailed to fill outside orders. Sydney Holthe and Bea Sumpton hastily met at Borowsky's where the four of us had a book-wrapping and adÂ­dressing "bee". Close to 100 books were delivered that afternoon to the post office for mailing to points across Canada and the United States.

A formal dedication of the book was held the afÂ­ternoon of January 8, 1978, in the F. G. Miller auditorium with a large crowd in attendance. Mr. Holthe, chairman of the Elk Point Historical Society, dedicated the book Reflections in the following words:

"By our words and by our ceremony today, January 8, 1978, we dedicate this book to the early peoples and to the settlers and to the builders who are still with us, and most solemnly we dedicate it to those who are no longer here but whose memory we cherish. As chairman on this occasion, I declare that this book,Reflections - A History of Elk Point and District, is today formally dedicated. May God bless it to its intended purpose. Amen."

Lawrence and Bea Sumpton beside their motor home in Bennett's backyard, WarÂ­burg. Their trip was interÂ­rupted at Thorsby where five lost wheel bolts necessiÂ­tated an unplanned stopÂ­over, just 13 miles from their destination.

(Mrs.) Anne Kates from the Pioneer Circle offered congratulations to the Historical Society. MLA Mick Fluker stated we should be proud of our book and wished the society well in sales and future endeavors. On behalf of the town of Elk Point Mayor Habiak expressed thanks to the society for the preservation of history for future generations. Reeve John Drobot brought congratulations from the county of St. Paul. Representing (Mrs.) Theresa Gadwa, former chief of Kehewin, was Mr. Norbert Jebeaux. Executive Director of Bonnyville Indian and Metis Rehab. Centre, speaking of the Indian's early associations with the town of Elk Point. Mary (Loftus) Bennett, editor of Reflections, outlined the trials and tribulations in the compilation and editing process of-- Reflections and read a poem she had written as a tribute to the pioneers.

(Mrs.) Gwen Nelson offered congratulations on behalf of Ferguson Flats Ladies Society. Louis Nichols, coÂ­editor of The Land of the Red and White , on behalf of- New Horizons, presented a commemorative scroll to the Pioneer Circle. Arthur Miller, chairman of the New Horizons Committee, accepted it. (Mrs.) Ila Borowsky, secretary of the Elk Point Historical Society outlined the future plans of the society.

Lois Nicols, co-editor of LAND OF RED AND WHITE presenting a scroll on behalf of NEW HORIZONS
to Arthur Miller, 1977 president of the Pioneer Circle. The scroll commemorates the successful completion of the Historical Publication project.

The first two books off the press were then offered to the highest bidder by Auctioneer Walter Skolarchuk.
Dr. K. C. Miller bought the first copy with a bid of $167.00,
Mayor Mike Habiak the second with a bid of $82.00.
The third copy will be retained by the society for our own archives.

The following are group pictures of some of the people who contributed articles or items for REFLECTIONS or who assisted by typing, art work, photography, assembling the Mock-Up, etc. Any person appearing in more than one picture would have been involved in more than one activity.

The program that followed represented local ethnic groups, old and young, and was greatly appreciated by all. The performers consisted of Don Conrad's Grade 6 Ukrainian Dancers, the Kehewin Indian Dancers, the Ukrainian Choir, Lyle Howe on the violin with his sister Olive Berg at the piano, and Mr. and Mrs. John Maxwell who provided music for the Old Time Square Dancers. Many performers and many in the audience wore colorful old time costumes. The afternoon ended with lunch served by members of the Elk Point Historical

SHADES OF THE GAY NINETIES, APPEARING IN VINTAGE COSTUME APPROPRIATE FOR THE OCCASION

and thus illustrated that this imÂ­portant aspect of their culture is not being lost.

He is pictured at the close of the dance with all twenty hoops in intricate formation.

His cance recieved much enthusiastic applause.

evoked fond memories with a few favorites from past years.

1978 will be another busy year for the society. The first will be the selling and distribution of the 1500 of Reflections. We would like to recognize and the following who volunteered to distribute the book for us. (Mrs) Evelyn Awid, 10187-103 St Edmonton; Mrs Daisy Young, 11 Arbutus Crt. Sherwood Park; Mrs Elizabeth Cole, St Paul; Mr. C. Magnusson, Vermilion; Mr. L. Modin, Elk Point; Mr Paul Stepa, Elk Point. Due to the efforts of Mickey Awid we also received publicity from the Edmonton radio stations.

The co-operation, enthusiasm, and aid we have met been gratifying. We have received many letters, calls, and oral testimonials expressing enjoyment historical data displayed in our book. Although has been a great deal of work, it has been a love for all of us. 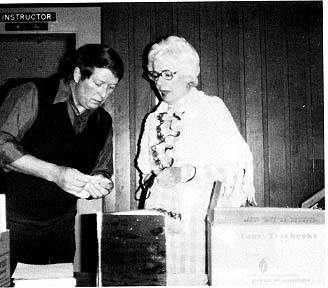 Emil Mudryk purchased his copy of Reflections from Ila Borowsky at the dedication ceremony.

Mrs. John Maxwell drove from Camrose to be part of the program. Johnnie called an Old Time Square Dance Set 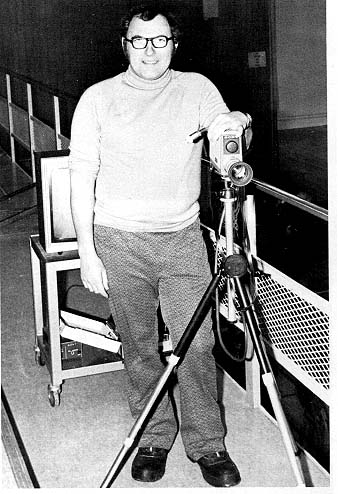