Preface to Our Past and a biographical note about the author

While recently visiting the public library in Vermilion trying locate material on Monkman's stopping place between Elk Point and Vermilion, I found the Vermilion local history book signed out and there was only one small collection of stories in a booklet about local history. It struck me that somehow a library should have more locally written booklets, monographs, and other material of local interest. When only the official local history dominates, a community is poorer off.

In a conversation with Steve this fall, September 1999, he said he thought he might be the oldest continuous resident of Elk Point. He noted there were many older residents, but none, as far as he could gather, who lived as long in town as he did. He moved here in 1925 and except for military duty during World War 11 (Royal Canadian Corps of Signals-Army) has lived continuously in this community. His father, William, and mother, Mary Muzyka, established a general store in Elk Point before moving on to farming. In his youth Steve was both a hockey and baseball player, attended school in Elk Point, and continued with sports until the outbreak of WW 11.

After military service Steve and his father bought Arnott Hall located on the southeast corner of 50th Avenue and 49th Street. With the passage of time Steve established both a movies theatre business and an interest in collecting antiques and items of historical interest. This collecting led to his building a private museum which houses to this day an immense and valuable collection of artifacts open to the public by appointment. Over the years Steve and his wife raised a family of five children.

Although now a widower (December 1999), and over 75 years of age , Steve has an abiding interest in history, antiques, and movies. In keeping with the times he has sought information on all three areas via the Internet. It saves gas and time. There is a local bet that Steve Andrishak will purchase a computer before 2001. 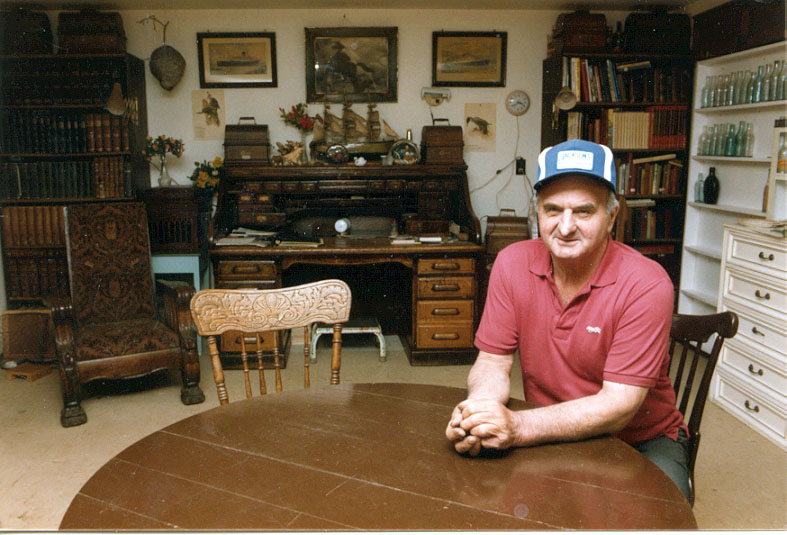 Our Past was the title of a series of Elk Point newspaper articles by Steve Andrishak dealing with Elk Point's history. The Elk Point Historical Society became interested in possibly putting the articles on its Web site. The Society thought there were about 25-45 articles in total. Steve Andrishak informed Society members that there 102 articles and he had always thought of putting them in a book. He granted the Society permission to use the articles on the Web site. The articles are interesting to read and they usually carry a personal touch involving Steve, such as the time he and a friend removed the bootlegger's cache of moonshine to another location and then watched the fun. Who was the bootlegger going to complain to? The police?

There is the hope that the articles will soon be on the Web site (www.elkpointhistory.ab.ca) and downloadable and maybe even a booklet form of the historical works will be published. The booklet may even be a part of the Elk Point Library's collection and add to local writings of "our past".