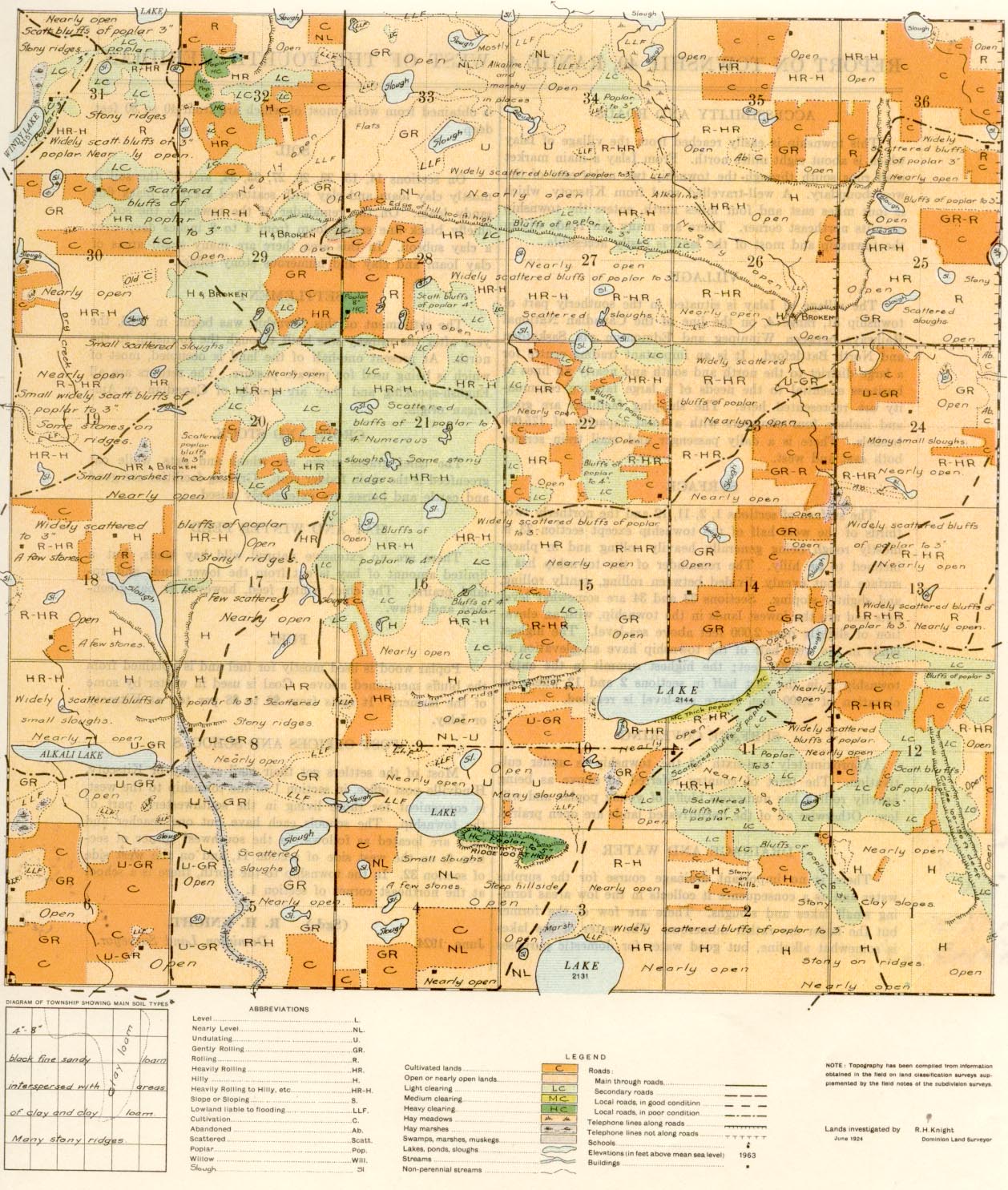 REPORT ON TOWNSHIP 49, RANGE 4, WEST OF THE FOURTH MERIDIAN

ACCESSIBILITY AND ROADS
This township is easily reached from the village of Islay which is about eight miles north. From Islay a main market road runs south through the township two miles east of the west boundary. A well-travelled road from Kitscoty, which is four miles east and four miles north, enters the township near its northeast comer. There are many fair roads within the township and most of the land is easily accessible.

VILLAGE
The village of Islay is situated in the southerly part of township 51, range 4, on the line of the Canadian National Railways between Winnipeg and Edmonton via Saskatoon and North Battleford. It is an important trading centre for a large district to the north and south and nearly all lines of business essential to the needs of a large farming community are represented here. The shipping facilities are good and include four elevators with a total capacity of 175,000 bushels. There is a daily passenger and mail train service both east and west.

SURFACE COVERING
Approximately one-sixth of the township is under cultivation. The tract of country referred to above as being heavily rolling has numerous bluffs of young poplar and willow. Otherwise all of the uncultivated lands are open prairie.

DRAINAGE AND WATER
There is no important drainage course for the surplus water and as a
consequence it collects in the low areas forming small lakes and sloughs. There are few of the former but the latter are rather numerous. The water of the lakes is somewhat alkaline, but good water for domestic purposes

HAY AND WINTER FEED
There are no extensive natural wild hay lands, but a limited amount of hay is ciit from the lower lands and upland prairie. The chief winter feed, however, is oat green- feed and straw.

FUEL
Poplar wood is used mostly for fuel and is obtained from the bluffs mentioned above. Coal is used in winter by some of the farmers. It costs from $6 to $8 per ton at Kitscoty

SETTLEMENT
The settlement of this township was begun in 1906, the year after the railway was built through the township to the north. At present one-half of the land is occupied, most of which is being used for private pasture. The settlers are all English-speaking and they are mostly of Canadian or American origin.