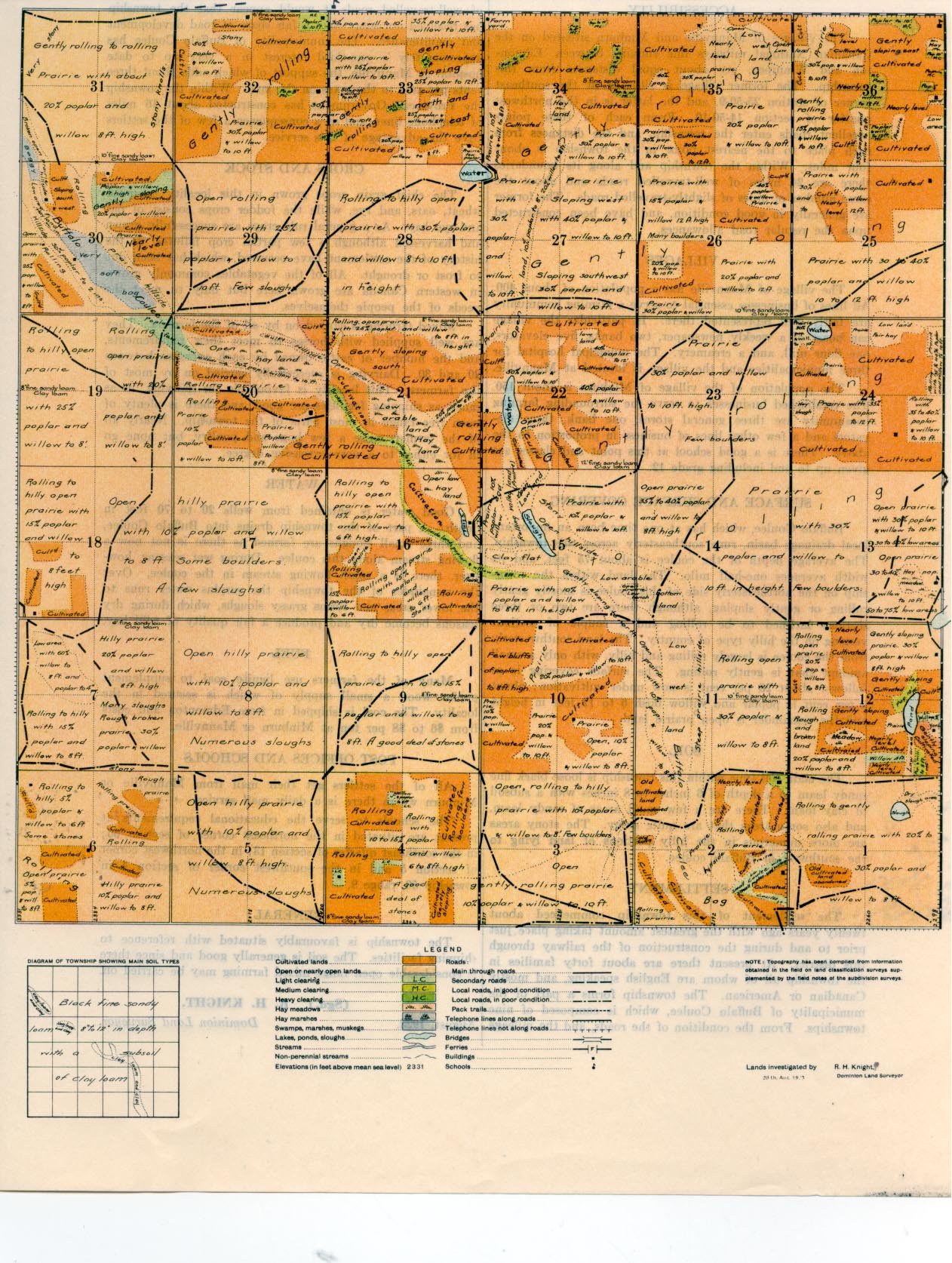 REPORT ON TOWNSHIP 49, RANGE 9, WEST OF THE FOURTH MERIDIAN

ACCESSIBILITY
The villages of Mannville and Minburn situated on the Canadian National railways line running between Edmonton and Winnipeg, are about equal distances from this township. The former village is situated at the southeast corner of section 25-50-9, and the latter is in the northwest quarter of section 14-50-10. From , each of these points excellent roads enter the township, and the distances from each place to the nearest point in the township is about four miles. Within the township and along its boundaries there are 24 miles of well-travelled roads and about the same number of miles of slightly-travelled roads. The former are generally in good condition, and have been constructed upon the regular road allowances.

VILLAGES
The village of Mannville has a population of about 400. All lines of businesses essential to serve a farming community are fairly well represented. there. In particular the Village can boast of a weekly newspaper, two banks, five elevators, one flour mill, and a creamery'. The municipal hospital for three municipalities, and the village is located at Mannville.
The population of the village of Minburn is about 150 The established businesses to serve the surrounding farming community are three general stores, one bank, three elevators and few other lines of business in proportion to the above. There is a good school at this point and, classes are given up to and including grade 12.

SURFACE AND SURFACE COVERING
Buffalo Coulee, which has at one time been an important local drainage basin, runs southeasterly across this township. The average depth of the coulee is about 75 feet, and its width averages one-half mile. The land with-in the township on the northeasterly side of this coulee is mostly gently rolling or gently sloping, although there are two or three sections inclined to be rolling and a couple of sections verging on the hilly type of country. The land southwesterly from the coulee is largely rolling and hilly, with only a small amount that is gently rolling. The surface covering is as follows: about 20 per cent is now under cultivation; about 9 per cent is poplar and 'willow bush 6 to 12 -feet in height and the remainder is open prairie land.

SOIL
The main soil type within this township is loose black fin, gandy loam to a depth of 6 inches to, 8 inches with a subsoil, of clay loam. There are a few small areas of sandy loam. and also some areas that are quite stony. The stony areas are more numerous in the hilly portions of land lying to the southwest of' Buffalo coulee.

SETTLEMENT
The settlement of this township commenced about twenty years ago with the greatest amount taking place just prior to and during the construction of the railway through this district. At present there are about forty families in the township all of whom are English speaking, and mostly Canadian or American. The township forms a part of the municipality of Buffalo Coulee, which is composed of nine townships. From the condition of the roads, and the mileage of well-travelled roads it would appear that the township has received not more than a fair share of road development and maintenance. The municipality of Buffalo Coulee has approximately a one-third interest in a very up to date hospital at Mannville, the support of which adds about three cents per acre
to the taxes on the land. Within the township the Provincial Government has constructed about 16 miles of telephone lines, and as a consequence a few of the settlers have the advantage of this service.

CROPS AND STOCK
The chief grain crops grown in this locality comprise wheat, oats, and rye, while the fodder crops consist of oat and rye hay. As a general rule crops are successfully grown and harvested although a few partial crop failures, in the 'history of the settlement have occurred, which has been due to frost or drought. All of the vegetables commonly grown in western Canada are grown here but only to meet the needs of the people themselves.
Mixed farming is carried on by all of the farmers. They are well supplied with horses to meet their requirements, and the number of cattle owned by each average between 20 and 30. Dairying is successfully carried, on by most of the farmers. This locality is favourable for dairying, in as. much as shipping facilities are good, and there is plenty of open free range in most parts of the town-lip. Nearly all of the farmers raise a few hogs and poultry, but none go in for either to a very extensive degree.

WATER
Good water is obtained from wells 20 to 70 feet in depth. A part of the township drains into Buffalo Coulee, and three small sloughs are formed as there is not now a flowing stream along this coulee. During wet seasons, however, there is a small flowing stream in the coulee. Over the remainder of the township the surplus water runs to the lower areas and forms grassy sloughs, which during dry seasons become dry and produce a fair quality of wild hay.

FUEL
Many of the farmers use lignite coal to supplement, poplar wood a small supply of which is secured in the locality. The coal is shipped in from Edmonton and costs from $6 to $8 per ton at Minburn or Mannville.

GENERAL
The township is favourably situated with reference to shipping facilities. The soil is generally good and since there considerable open range mixed farming may be carried on.
1921