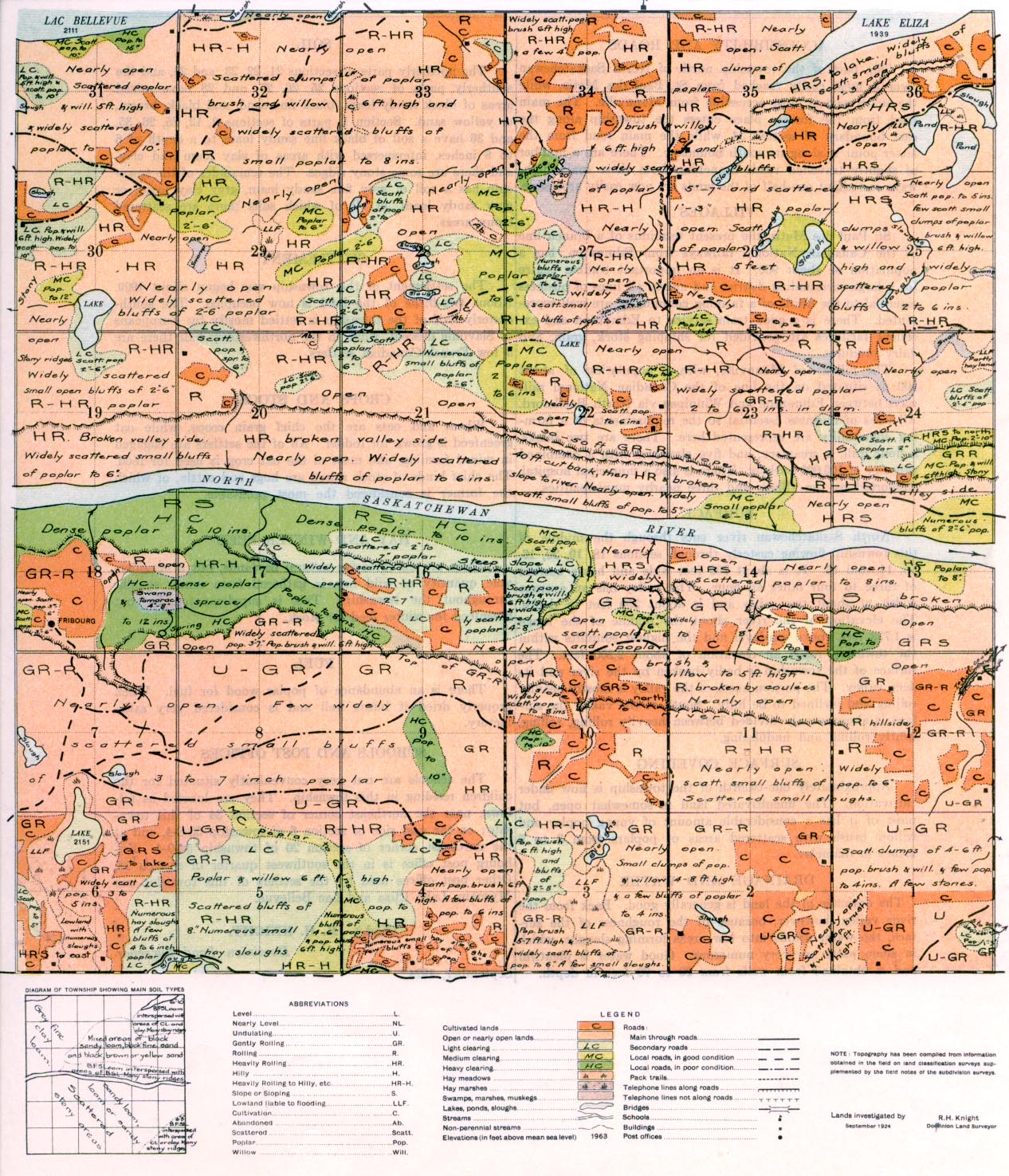 REPORT ON TOWNSHIP 55, RANGE 9, WEST OF THE FOURTH MERIDIAN

ACCESSIBILITY AND ROADS
The part of the township north of North Saskatchewan river is most easily reached from St. Paul des Metis, while the south part is most accessible from Mannville. The main road from the former place enters the township along the east boundary of section 34, while the main road from the latter point is along its south boundary. There are a number of slightly travelled roads branching branching from these main highways and about one-half of the lands are now easily accessible.

VILLAGES
St. Paul des Metis, the present terminus of a branch line of the Canadian National railways from Edmonton, has a population of about 900. It is an important trading centre for a large surrounding district and nearly all lines of business essential to the needs of a farming community are well represented. There is a good train service to Edmonton and excellent facilities are provided for shipping stock, grain, and dairy products.
The village of Mannville, with a population of about 400, is situated, on the line of the Canadian National railways between Edmonton and Winnipeg via North Battleford. All lines of business essential to the requirements of a farming community are represented here. There are two banks, a flour mill, a creamery, and five elevators with a combined capacity of 165,000 bushels. There is also a municipal hospital, supported by the village and three nearby municipalities.

SURFACE
North Saskatchewan river cuts through the middle of this township flowing easterly through sections 18, 19, 20, 16, 15, 14, and 13. It is about 700 feet wide and has a current of three to four miles an hour. The valley has an average width of about two miles and is about 350 feet in, depth. The elevation of the river about the middle of the range is 1.733 feet above sea-level and the highest summits within the township reach an elevation of about 2,200 feet. The surface of the township is badly broken by the river and its deep valley. The portion north of the valley -is mostly heavily rolling and inclined to be billy. South of the valley the sur- face is about evenly divided between heavily rolling, rolling, gently rolling and undulating.

SURFACE COVERING
Approximately one-twelfth of the township is now under cultivation. The uncultivated land is somewhat open, but most of it has a considerable amount of young poplar and willow brush with scattered areas of poplars from 3 to 6 inches in diameter.

DRAINAGE AND WATER
The drainage of the land is generally good. Back from the river valley, however, because of the roughness of the surface, the water drains into low areas forming sloughs, which in some parts are very numerous. Good water is plentiful and is obtained from wells from 20 to 70 feet in depth.

SETTLEMENT
The settlement of this township was begun about 1909. About two-fifths of the land is now occupied. The south- easterly half of the township is settled mostly by Europeans of Slavonic descent, while in the northwesterly half there are a few French-Canadian settlers.

CROPS AND STOCK
Wheat and oats are the chief grain crops, while oat greenfeed is grown for fodder. All of the settlers are engaged in mixed farming, and most of the oat crop is used for feed. The chief kinds of stock raised are hogs and cattle, of which the former is considered the most profitable.

HAY AND WINTER FEED
There are no extensive natural hay lands, but a consider- able quantity of wild hay is gathered from many sloughs throughout the township. This is supplemented by oat greenfeed for winter feed for stock.

,FUEL
There is an abundance of poplar wood for fuel. When properly dried it burns well and is considered very satisfactory.