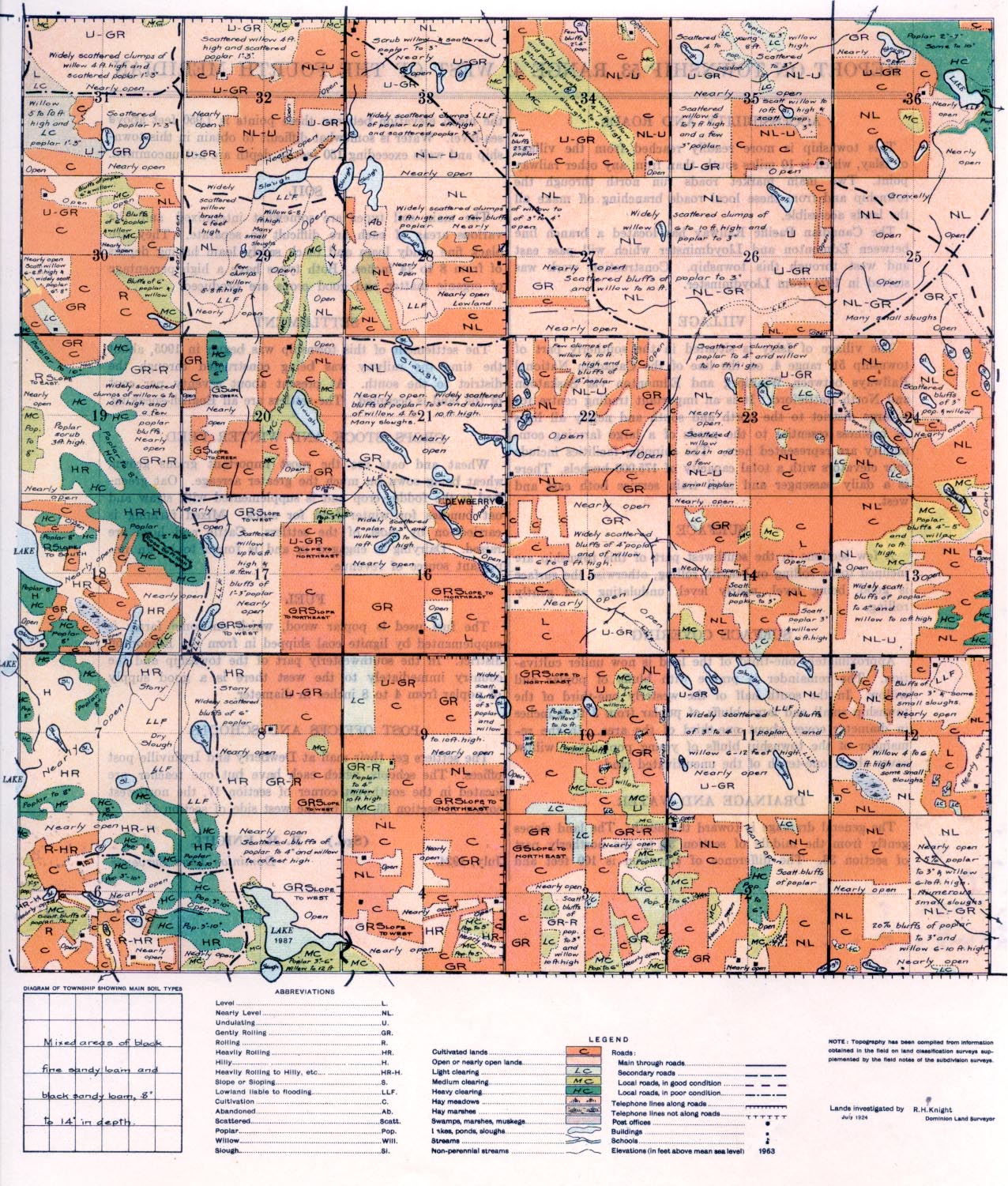 REPORT ON TOWNSHIP 53, RANGE 4, WEST OF THE FOURTH MERIDIAN

ACCESSIBILITY AND ROADS
This township is more readily reached from the village of Islay, which is 10 miles south, than from any other railway point. Two main market roads run north through the township and from these local roads branching off make all the lands accessible.
The Canadian Pacific Railway has located a branch line between Edmonton and Lloydminster which will pass east and west through this township. Construction work was started in 1924 from Lloydminster.

VILLAGE
The village of. Islay is situated in the southerly part of town ship 51, range 4, on the line of the Canadian National Railways between Winnipeg and Edmonton Time -Saskatoon and North Battleford. It is an important trading centre for a large district to the north and south and nearly all lines of business essential to the needs of a large farming community are represented here. The shipping facilities include four elevators with a total capacity of 175,000 bushels. There is a daily passenger and mail train service both east and west.

SURFACE
A few sections in the southwest part of this township are inclined to be rolling or heavily rolling, otherwise the surface is good, being level, nearly level, undulating and gently rolling,

The general drainage is toward the north. The land slopes gently from the middle of section 16, to the northerly part of section 36. The difference of elevation is 100 feet and the mean elevation between these points is 1,950 feet above sea-level. Water is somewhat difficult to obtain in this township and wells exceeding 150 feet in depth are not uncommon.

SOIL
The main soil types are somewhat intermixed and the various areas of each are difficult to separate. They are black fine sandy loam and black sandy loam having depths of from 8 to 14 inches. Both types have a high percentage of organic matter and good crops are produced.

SETTLEMENT
The settlement of this township was begun in 1905, about the time the railway was being constructed through the district to the south. At present about seventy per cent of the land is occupied. The settlers are all English-speaking.

CROPS, STOCK AND WINTER FEED
Wheat and oats are the most important grains grown, wheat being sown on much the greater acreage. Oat green- feed is the fodder crop and is supplemented with straw and oat bundles for winter feed for stock. Mixed farming is carried on by most of the settlers. Cattle and hogs are raised. Dairying is engaged in and is found to be an important source of revenue.

FUEL
The fuel used is poplar wood, which on some farms is supplemented by lignite coal shipped in from the Edmonton district. In the southwesterly part of the township and the country immediately to the west there is a good supply of poplar from 4 to 8 inches in diameter.