ELK POINT -- "Of all the towns in Alberta of comparable size, Elk Point has the richest historic heritage, and the greatest potential for tourism". This was the theme of the address by the Honorable Grant McEwan, Lieutenant-Governor of Alberta, in the ceremony that officially opened Elk Point's "Atiyek Day', Saturday, May 31st.

And Elk Point's Chamber of Commerce, in naming their district "Land of Apollo", found they had chosen their mythological patron well, for after a week of dismal weather May 31 dawned bright and sunny, and Apollo truly reigned for the day. Over four hundred Atiyek celebrants began the day with a pancake breakfast at the site of Buckingham House and Fort I George, four miles east and one mile south of Elk Point. Oron Davis and his committee did their work well, for the breakfast was delicious and efficiently served.

At the site of Fort George visitors viewed an excellent scale model of the original fort, constructed by several high school boys, under the direction of Mr. Ray Hellquist. Where each of the buildings once stood was clearly marked with signs, and with information given by the boys in attendance, it was quite possible to imagine our selves back in the old fur trading post.

Meanwhile, down on the North Saskatchewan River, seven rafts were vying for the prize money in the race from Fort de Isle to Fort George At about 9:30 a.m. word went around at the breakfast "The first two rafts are in."

First prize winners were Ron Barwick and Darryl Coma, Elk Point, with a time of just under three hours. Second prize was won by Miles Grosseth and Garry Kozicki, also of Elk Point, and the Mallaig team Alan Buck and Marcel Martin took third place honors. It was a breath-taking event, and we predict a flurry of scientific 5tudy of raft construction in coming year.

By eleven o'clock a good crowd had gathered in front ' the town hall in anticipation the arrival of Alberta's Lieutenant-Governor, Mr. Grant McEwan. Children waved Canadian flags as his car drew up escorted by the RCMP. Mayor Habiak and members of the council were there to greet Mr. McEwan spent a few minutes talking with the people, greeting all the children.

He was then taken into town hall, and then through Centennial library. Here he was welcomed by library custodian, Mrs. Helen Petrosky, shown a map she and her staff had prepared of the fur trade area.

Mr. McEwan expressed a wish to see Fort George and Buckingham House, and this was immediately arranged. He then visited "Fort George Museum" and discussed the many fur-trade artifacts with curator Steve Andrishak. A luncheon was served by the United Church ladies which Mr. McEwan declared to be delicious, and he referred twice later in the day to the amount of lemon pie he consumed.

Then it was 12:30 and "Parade from the Past". Heading the parade were two RCMP in red coats, followed by Ron Barwick and the Elk Point Band and Majorettes. Mr. McEwan, Mayor Habiak, and Corporal Borg  rode with Cliff Swedgen in a buggy. The Queen contestants and an old time orchestra graced the George Potts wagon. George Pinder's team drew the winning raft and The Frog Lake Dancers, and Don Pinder's covered wagon carried the local 4-H Club. Young Lee and Murray Babcock entered their "Queenie" pulling a travois. Mrs. Jessie Keck walked in the parade in a charming period costume. Bob Fedorus pushed an ancient high-wheeled bicycle. Finally we must mention one of the most interesting entries in the parade, a real-life trapper from northern Alberta, Mr. Robert Martin, with one of his pack clogs. Along with Mr. Harvey Dunham, and dressed as "old time trappers", carrying an ancient  rifle â they were tremendous! Congratulations to Paul Stepa for a colorful parade and for interpreting so well the theme of the day.

Afternoon activities took place at the sports grounds, where the gate had been built to represent a trading post palisade. A stage also had been constructed on this theme. In a very picturesque setting stood the Indian teepees from Frog Lake. To add color to the occasion were Canadian flags, and a Union Jack and Hudson B a y flag lent for the day by the Hudson's Bay Co. of Edmonton. On stage for the onening ceremonies were seated the queen candidates, Mrs. Ethel Martin of Lindbergh in charming Gay Nineties dress; Mrs. Mary Louise Dion of Frog Lake in a beautiful Indian costume; and Mrs. Jessie Ryzycki of Elk Point in lovely Ukrainian style.

Oron Davis, president of the Elk Point Chamber of Commerce, welcomed all to "Atiyek" day, then introduced Mayor Habiak who offered a few appropriate words, who in turn introduced the guest of honor, Mr. Grant McEwan. Mr. McEwan was genuinely sincere in expressing his pleasure at having been invited to Elk Point, and the welcome he had received. As a writer and a historian he feels strongly that we should not forget our rich historical background, and commends the efforts we are making now in commemorating the fur trade days.

A delightful ceremony followedâthe crowning of the Queen. Mrs. Florence Lorenson, in charge of the contest, paid tribute to each of the contestants for the good and useful lives they have led and the contribution each has made to her community. She then named the "Princesses", runners-up in the contest, Mrs. Dion, Mrs. Rysycki, and Mrs. Badger. Mr. McEwan presented each with a trophy and a bouquet of carnations. Doris Quinney of Frog Lake accepted on behalf of Mrs. Badger, who unfortunately could not be present. Then Mrs. Ethel Martin of Lindbergh was proclaimed "Atiyek Queen" and was crowned by Mr. McEwan, who also presented her with her trophy and a bouquet of red roses. This I ceremony was most enjoyable,  and was definitely one of the highlights of the day.

Mr. McEwan was presented with a hand-tooled leather wallet by the young fellow who made it, Jim Magill. And on behalf of the Town of Elk Point Mr. Habiak gave the Lieutenant-Governor a beautiful pair of mukluks. Mr. McEwan in expressing his thanks said, "I like the people of Elk Point". Surely what followed, the performance of the Frog Lake dancers, was the most accomplished of the day. A large crowd gathered to witness thirty minutes of beautiful dancing by the young and old in dazzling costume. The singers were trained and led by Mr. "Toots" Dion,

Kryvenchuk, had something of interest for everyone. A stage show of excellent caliber continued for some time. Games and competitions proved very popular. The dart board, the pillow fight, the fish pond, and races were a real attraction. One hundred and fifty people viewed the slides that Mr. and Mrs. Arolin Hunt showed in the high school. Corner devoted to tiny tots, with Roy Scott's pony ride and Louise Mass' "Papoose Land", provided hours of pleasure. The horse shoe tourney was won by Pete Wilkinson and Mike Fry. Second place was taken by Fred Frisby and Dick McGinnis, while third place was awarded to Nick Melnyk and Tony Zarowny. One of the busiest places was the refreshment booth, where the ladies of the town worked tirelessly providing food and drink to the large crowd.

"Fort George Museum" had approximately one hundred forty visitors during the afternoon. coming from Mannville, Lindbergh, Heinsburg, St. Paul, Ashmont, Edmonton, Calgary, Derwent, Vermilion, Frog Lake, Wainwright, High Level, Gurneyville. Away from home were Mr. and Mrs. Marshall from Whitehorse, N.W.T. Steve was particularly pleased with the number of Elk Point visitors, who appreciate the contribution he has made in developing an interest in the old forts.

In the early evening a few families had their suppers by the fires prepared by the Elk Point Boy Scouts. At six o'clock a wiener roast was prepared by the committee for the Frog Lake Dancers, before they boarded their bus for home.

Evening activities, one of the many responsibilities of Mrs. Myrna Fox provided a fitting climax to the day. A "Gay Teens" dance was held in the F. G. Miller High School auditorium where the young crowd danced to a good orchestra. And the Elks staged a "Gay Nineties" dance that was a real swinging success. Congratulations to the members of the Lodge for the way they decorated the basement, trading post 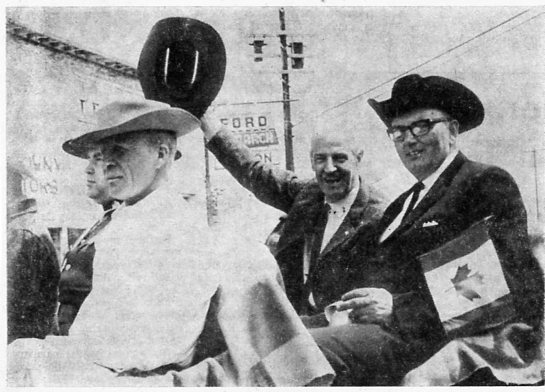 Waving a big cowboy hat matched with a large grin, Lieutenant-Governor. Grant McEwan gets into the spirit of things at Atiyek Day in Elk Point Saturday. He is riding in a buggy in the parade accompanied by Mayor Mike Habiak.