During the First World War, from 1914 to 1918, many of our local boys served faithfully. Dr. F.G. Miller was one who volunteered his services. There were many who joined the forces to alleviate hardships they encountered as farmers. Many left wives and families at home to fend for themselves. Some never returned and some returned but suffering from the effects of gas, which was used during the First World War. Upon their return they were able to make a new life for themselves and their families. The government assisted them to purchase farms and machinery and paid for the continuation of schooling; from these returned men we produced some of the finest doctors, lawyers, teachers, farmers etc. 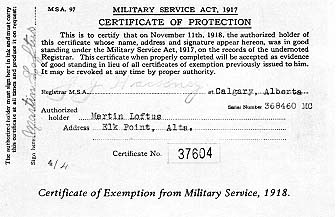 Certificate of Exemption from Military Service, 1918.

When the Second World War of 1939-1945 broke out our sons did not hesitate to take up arms to fight for our country and freedom. Some of the first war veterans that were fit and able also joined ranks, perhaps not at the front lines, but were, nevertheless, filling jobs on staff so that the younger ones could go to battle. We also had many native boys who went to fight for our freedom. Dr. A.G. Ross enlisted which left our clinic with only two doctors.

It was after the Second World War that, having enough returned men in the district, it was decided to apply for a charter and establish a branch of the Royal Canadian Legion. Hardy Lawrence, a veteran, was the organizer, assisted by Brn Keller. The charter was granted, dated October 11, 1944. The Charter Members were E.L. Arnott, who was the president; J.B. Abrahams; G.H. Graham; Paul Petrosky; H.E. Hobden; E.M. McDonell; Dr. F.G. Miller; Ed. Spencer; R.C. Hamer; Howard Covey; H.J. Lawrence, M. Chornoluk. Some of the other presidents were Sid Male, Eugene McDonell, Robert Quin, Ralph Riemer, D. Buksa, Wes Scott, W. Keller. In 1944 plans were put forward to start building a Legion Hall. The branch did not have any money, but had a lot of enthusiasm, so the group volunteered their time, lumber, etc. and started building. Once the building was up they started having functions to raise money. The ladies also got interested in the enterprise. They formed a Ladies Auxiliary and helped raise money. The kitchen was added, water works were installed. The hall was used for many purposes: weddings, funerals, bingos, dances, banquets, etc. The Ladies Auxiliary ceased functioning due to lack of membership, so all the money was transferred to the Legion. In 1961 the Legion bought uniforms, balls and bats and sponsored the Pony League Baseball. When the Elks' Hall was built in 1967, the Legion Hall, being quite small, was not, used for many functions anymore; the membership wasn't large enough to pay for the upkeep of it, so in 1975 it decided that the hall be turned over to the town to establish a senior citizens' Drop-In Centre.

The Second World War had a marked effect on the who went to war. In 1939 when it was imminent that would be declared shortly, some of them took the attitude that there was no sense in working; some rushed into marriages. The impact of the war was felt by boys coming from rural areas because, before the war broke out very few had cars, many had not seen city life. Suddenly they were exposed to all elements of society, and having money to spend and no future, they became free spenders.

Our boys served in all theatres of war, some fighting Rommel in Africa, some in Italy, others helping to liberate Holland. Many lost their lives, some became casualties, were prisoners of war. When the war ended many returned Canada to start life anew; some brought war brides, sweethearts, to start life in Civvy Street. Some ended up without wives, because the European girls could not adjust our way of life. The veterans also had difficulty adjusting to civilian life, especially those who were away for long periods out of Canada. For some it was back to school, for others back to professions. Farm boys found themselves looking at farming with tractors instead of horses as before the war the combine had replaced the threshing machine. But with modernization of farming operations they found it not easy to purchase new equipment. During the war factories were producing armaments and machines so product farm machinery and equipment was curtailed. They found farm life had improved during the war years. Farmers had prospered from receiving good prices, no restrictions on production. They were encouraged by the governmet to produce all they were capable of, to feed the soldiers and country.

Our section supplied communications between headquarters, corps and division. Each of our units consisted of a transmitter and receiver mounted within a van, on a two- ton truck chassis. This was towing a power plant mounted a two-wheeled trailer manned by three wireless operators and a truck driver. During the 'Battle of the Bulge' four units were dispatched to Velthoven in Northern Holland. Our assignment was to operate 'dummy' stations, passing fictitious orders about troop movements, advance orders, hoping the enemy would intercept and think there was a heavy concentration of our troops in the area, when there were none within miles. The last evening the word came warning us of an impending attack by enemy para troops -- (twenty of us, essentially not combat troops guard against an invasion by seasoned paratroopers! However we took our rifles and extra ammunition and dispersed over an area of a mile or so. It was a bright moonlight night, one of the longest, loneliest I have ever spent. Of course the raid never came. I often wondered if the enemy had simplt reversed our tactics. Much to our relief we were called to Corps Headquarters next morning.

EXCERPTS FROM THE VERMILION STANDARD DURING THE FIRST WORLD WAR.

Mar. 29/16 - A Canadian volunteer holding a homestead may count his active service as a performance of residence. Should he be disabled he may receive his patent forthwith.

Horace Ramsbottom was wounded this week.

Mar 28/17 - Richland and Elk Point served a lunch in Elk Point for Red Cross $14 was taken to aid boys at the front.

August 1/17 - Corporal Arnott who went overseas with the 194th Highlanders under Lt. Col. Craig arrived home on furlough. He was on the firing line. He was called home because of illness of his wife. The liner on which Corporal Arnott returned to Canada was accompanied out of the danger zone by four or five destroyers. The people in England he states have settled down to determination to win the war, and everyone, young and old, male and female, are doing their bit.

This poem was written by Ernest Scott as a tribute to John Wolfe,

Harsh winters fade away to spring,
The trees come into leaf ere long, then
Bleakness turns to life in almost everything
And soon the larks in early summer sing.
The summers wane to fairer season,
Autumns usher human thoughts sublime,
And yet none pierce the veil of universal reason;
None measure God's unending reach of time.
Oft in deepest retrospection led,
More so as on the way toward the town,
My thoughts return unto this country lad;
A neighbor youth that I so long have known.
Going out to school each morning.
Often I have seen him on the way,
Or perchance on homeward trip returning,
As nearer drew the ending of the day;
And meeting thus, or otherwhere,
His greeting sought a chord in me,
That welled again in pleasing echoes there,
Re-echoing the youth's integrity.
Unskilled the doubtful arts to use;
No seem, no sham, no sophistry;
Earth's worthy causes ill-afford to lose
A character so genuine and free.
The baneful drum of war descending,
Called our hero from his home,
He answered cheerfully and unpretending,
Ere his majority in years had come.
Now he's gone - the long traverse,
That long lone avenue of no return,
No more to walk this earthly vale of tears;
Never back across the years to yearn.
His home is left so much alone,
But he has travelled all of honor's way,
Heir now with Him who, slain for everyone,
Remains the guiding light to all eternity.
Beyond the shoreless reaches far,
Somewhere in Heaven's ethereal home,
There now he rests another brighter star
The Great Designer called to be with photos