The earliest store in Elk Point district was the Hopkins Trading Co., started near Hopkins Ferry about 1909. It was destroyed by a prairie fire in May, 1910, but was rebuilt and re-stocked the same year.

The first stores at Elk Point were located at the "Four Corners", east of what is now the main business section.

Also in this area were the Caskey and Plante Hotels; Caskey's Barn; Sam Lee's Cafe, the Canadian Bank of Commerce; and the Veterans' Hall.

On February 17, 1922, a fire starting in the Veterans' Hall destroyed that building, as well as C.J. Markstad's warehouse and Chas. Hood's Hardware, which contained the post office and telephone office. But, as reported by the Vermilion Standard, "Elk Point rose from the ruins", with Mr. Hood building a new hardware store, and Mr. Markstad a new implement and harness store.

After the railway came through in 1927, most of the stores were moved the short distance west to the new town site. 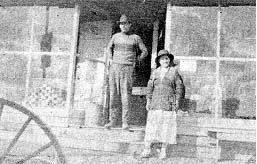 Andrishak's General Store was built by Wm. Andrishak at the old town site in 1925, and moved in 1927. During the 1930's it was something of a social centre, as it had one of the first radios in the district, and people from both town and country would sit around the radio night after night, eating peanuts and enjoying the entertainment. In 1939 the store was taken over by Andrishak's daughter Olga and her husband Max Fischer. It was later run by Mike Andrishak, then sold to Nick Wozny. Marshall Forchuk bought it in 1965, and sold it to Darwin Investment Co. in 1968. It then went out of business, and the building was vacant for several years, before being torn down in 1974.

C.J. Markstad built a store right at the intersection of the main streets at the new town site, late in the 1920's. In later years, it was run by his son-in-law, Hugh McQuillan, before being sold to Paul Palynchuk. Harry Shewchuk bought the store in 1948, and operated it until 1976, when it was sold to Steve Wolanuk. The business is now known as Wolanuk's Fashions and Foods Ltd.

C.A. Johnson built a general store in 1927, but it burned down in the early 40's, and the Toronto-Dominion Bank now stands on the site.

Another general store was operated by Mr. and Mrs. Frank Miller during the 1940's and early 50's, in the building now housing the Elk Point Bakery.

Paul Petrosky ran a general store in the late 1940's in the building now occupied by Macleods. It was taken over by Ernest Mayowski, before the building was bought by Orin Davis.