The first telephone line in the Elk Point district was built in 1912. It was a thirteen mile extension of the Vegreville - St. Paul long distance line, from St. Paul to Dennisville, via Elk Point. Service began on August 9, 1913 when Charlie Hood had the first telephone installed in his store which also served as the post office. Mr. Hood's store served as a toll office, with a single phone from which all people in the district could make long distance calls through St. Paul. In 1919, a phone booth was installed. In 1921, a small switchboard with six lines was installed to switch calls to Dr. F.G. Miller. In February, 1922, Mr. Hood's store, including the telephone office, was burned out. After this time, the government telephone office was switched to Dr. Miller's office. Dr. Miller held the agency from 1922 until October 1928. 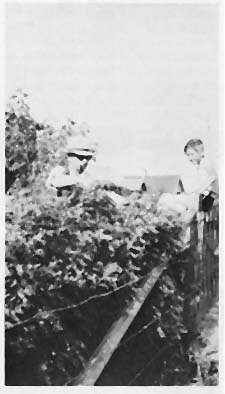 A very small exchange was opened in early 1928.

Exchange subscribers were first listed in the Edmonton and District Directory for July 1928. 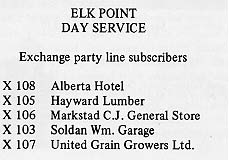 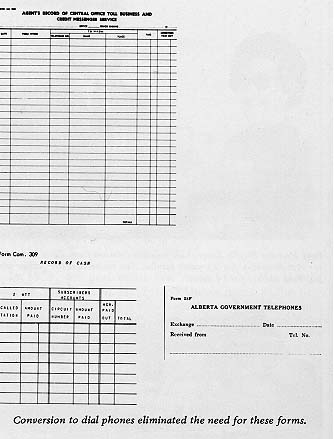 The new exchange was located in the drugstore (where it presently stands) with the three successive pharmacists acting as agent. The first of these was Stuart B. MacDonald who was agent from October 31, 1928 until January 6, 1945 when George H. Graham became the local druggist. In March, 1946, Robert J. Tredger became the agent. The exchange was handled by a local operator with only day service.

In 1950, the exchange, by now considerably expanded from its original few lines, was moved to Mr. Ronald Barwick's store which was located immediately north of the present Toronto-Dominion Bank. Mr. Barwick was agent until June, 1954 when (Mrs.) Ella M. Williams took over the agency. Within months the exchange moved to the new Alberta Government Telephones building which was located where Riemer's house is presently located.

In 1950, there was still day service (8 a.m.-6 p.m.) only. This was soon extended to 8 a.m. to 8 p.m. and then 8 a.m. to 12 p.m. During this time, a "night patch" would be put on after regular hours. This meant that the lines between Dr. Miller's house and the hospital, Dr. Ross's house and the hospital and the line between the hospital and the long distance operator in St. Paul would be connected in case of an emergency. Around 1953-54, 24 hour service was introduced with an operator available at all times.

(Mrs.) Kay McAleese worked for Mrs. Williams as an operator until she herself took over as agent in August, 1956. Mrs. McAleese was the agent until the office was closed due to dial conversion on August 15, 1965. The A.G.T. building was soon after moved from Elk Point to Muriel Lake for a summer vacation home