Following construction of the Salt Plant near Lindbergh, construction of housing at Riverview townsite was undertaken. Residents of the townsite and other plant employees organized a social club called the Cascade Community Club in 1951. Social activities such as parties, sports days, corn roasts, Christmas concerts, box socials, moccasin dances, etc. were organized for the people in the district as it was quite isolated due to poor road conditions. Social gatherings were held in the Staff House basement recreation room and were well attended by the residents. A movie projector was purchased in 1953 and l6mm movies were shown regularly.

The name of the club was changed to 'The Windsor Club' in 1955 and in the same year it was decided to build a combination curling rink and recreation building. On October 23 about thirty employees levelled a spot and construction began. The building was completed in November and the first Christmas party was held on December 22. Curling ice was soon completed and the records show that two novice Lindbergh teams defeated two visiting Elk Point teams on January 15, 1956. The first mixed bonspiel (also probably a first for North-Eastern Alberta) was held March 15-19, 1956, with twenty-four rinks participating. The correspondent of the "Windsor Salt Licks" (The Salt Company Plant News Sheet) ends the story of the first bonspiel as follows-"We can only hope that our visiting curlers do come back since it gave us Lindberghers a lift-we who live at the 'fringe of civilization' and in a country that has been neglected for so many years by God and the Government". That hope has been amply fulfilled through the years and the Windsor Club Mixed Bonspiel has been a great success throughout its twenty-three annual competitions.

The Windsor Club was incorporated under the Societies Act in 1956 with president, vice-president, secretary, treasurer and five directors, one of which would be the manager of the Canadian Salt Company Plant, as the company would own the building and the club would own the facilities. The early years of the club's existence were marked by many regular fund-raising functions such as turkey shoots, bingos, card parties etc. to raise money to furnish and equip the new recreation building. Summer picnics were organized at Whitney Lake and later at the townsite playground. The skating rink was constructed along side the curling rink. In 1957 the pony league ball team was sponsored by the club. Regular dances were held at New Years, Valentine's, Curling Wind-Up, Hallowe'en and Christmas. Additional floor space was added to the recreation building in 1959 and a sound system was purchased for use at club functions. In 1960 playground equipment was installed on the townsite playgrounds. 1962 saw the beginning of the annual Windsor Club cribbage tournaments which continue to have participants over a large area. The annual Windsor Club barbeques began in 1963 and continue to be the largest social gathering organized by the club. The kitchen of the rec. room was enlarged to its present size in 1965 to provide a more convenient facility during curling, etc. A shuffleboard was installed in 1970 and has provided many hours of recreation for those attending club functions. The club assisted in equipment purchasing for Mooswa Hockey Club in 1973.

Children's Christmas Parties have been held for children of members since the club's beginning, and for a number of years featured a concert. The concerts were very colorful and entertaining and were very much appreciated by those attending the parties. A great deal of time and effort was contributed by those organizing the programs and practices. Children's Theatre Parties were held at the Elk Point Arrow Theatre in 1974 and 1975 and regular Christmas parties since then. Teens' Christmas Parties were started in 1976 and should prove to be a continuing Windsor Club function.

In 1976 and 1977, the children's playground was cleaned up, equipment painted, a new slide installed and sports equipment purchased. The skating rink was renovated and mercury vapour lighting installed.

The Windsor Goodwill Fund, established soon after the Club's beginning, is contributed to by all employees and makes annual donations to national charities. The fund also provides gifts on the occasion of employees' weddings, retirements and farewells.

A source of club revenue and a service to club members has been the club's pop vending machine and soup vending machine installed in the Salt Plant. The pop machine was replaced with a new model in 1975 and the soup machine service was discontinued in 1976. Revenue received, along with members' dues, and revenue from the club's curling and curling rink booth operations provided the funds for club operation, projects, and charitable contributions.

Membership is made up of all salt plant employees and their wives/husbands, plus many honorary members in the district.

Over the years many people have contributed to the success of the many club endeavors.These would include: 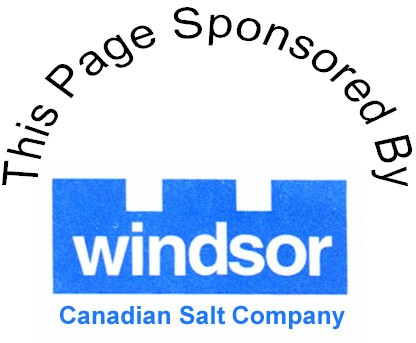