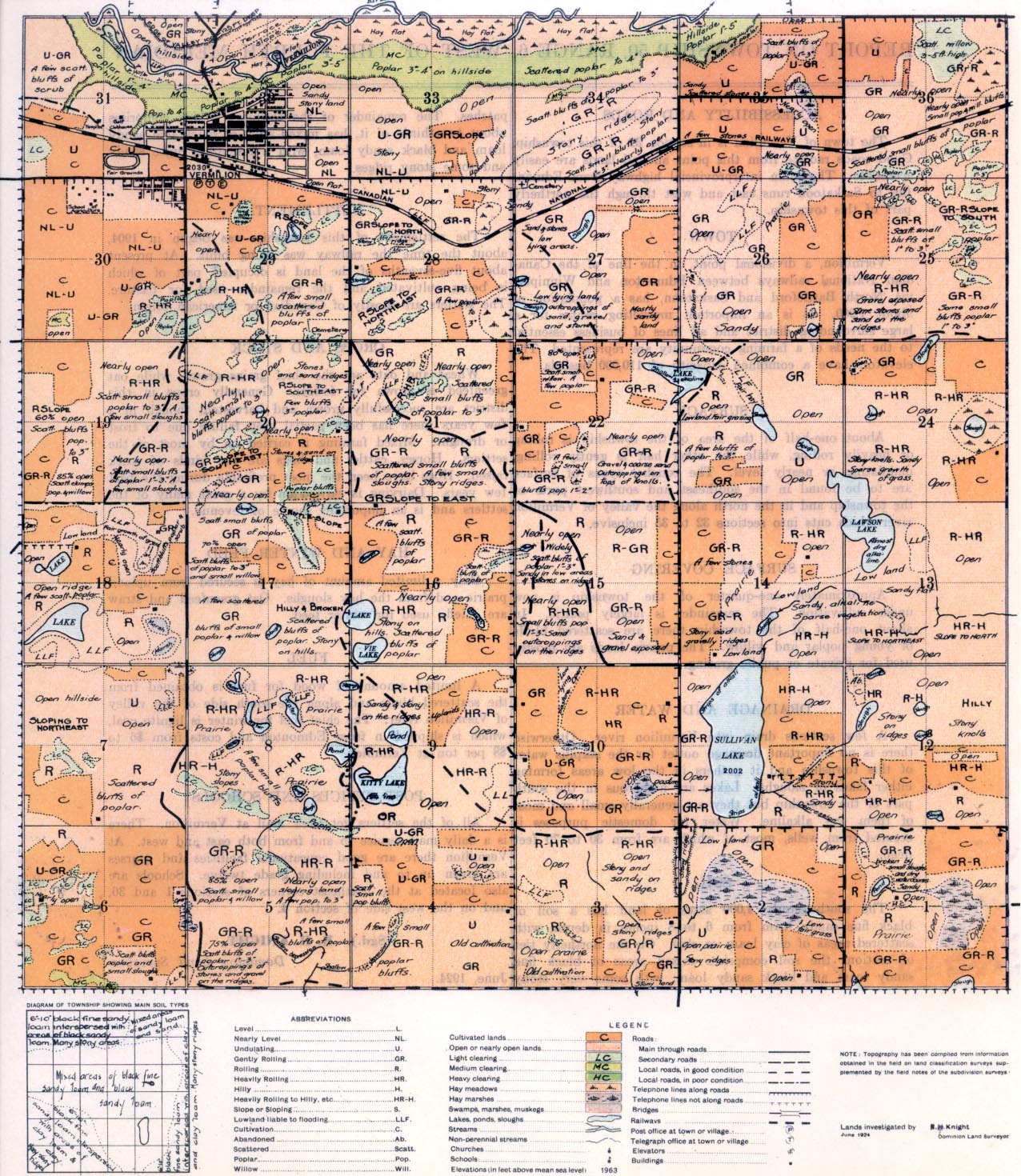 REPORT ON TOWNSHIP 50, RANGE 6, WEST OF THE FOURTH MERIDIAN

TOWN
Vermilion, a divisional point on the line of the Canadian National railways between Edmonton and Winnipeg, via North Battleford and Saskatoon, has a population of about 1,200. It is an Important m1arketing centre for a large surrounding district and all lines of business essential to the needs of a farming community are represented. The elevators have a combined capacity of 110,000 bushels.

SURFACE
About one-half of the area of the township is rolling or heavily rolling, while the other half is gently rolling, undulating or nearly level. The rougher types of surface are to be found in the southeast and southwest parts, of the township and in the north along the valley of Vermilion river which cuts into sections 32 to 35 inclusive.

SURFACE COVERING
Approximately one-quarter of the township is now under cultivation. The remainder is largely prairie. In about one-half of the township there are scattered bluffs of young poplar and willow. The prairie lands are mostly used for private or public grazing.

DRAINAGE AND WATER
A few sections drain into Vermilion river. Otherwise there is no important drainage outlet for the surplus water of this township and it gathers in the low areas forming either lakes or sloughs. Lakes are numerous in the south part of the township but -they are generally small and most of them are alkaline. Water for domestic purposes is secured from wells, most of which are from 30 to 70 feet deep.

SETTLEMENT
The settlement of this township was begun in 1904, about the time the railway was being built. At present about five-sevenths of the land is occupied, part of which is being cultivated and the remainder used for pasture. The settlers are mostly of Canadian or American origin.

CROPS AND STOCK
Wheat and oats are the chief grains grown, while oat greenfeed is grown for fodder. Generally crops in this district are successfully grown and harvested, though in a few years there has been partial crop failure due to frost or drought. Mixed farming is carried on by most of the settlers. Horses, cattle, and hogs are the kinds of stock raised.
Hogs have been the most profitable during the past few years. Dairying is carried on by a great many of the settlers and is an important source of revenue.

POST OFFICES AND SCHOOLS
All of the settlers get their mail at Vermilion. There is a daily mail service to and from both east and west. At Vermilion there are good eaucational facilities and courses are given up, to and including grade twelve. Schools are also located at the northeast corners of sections 1 and 36, and on the west side of section 4.