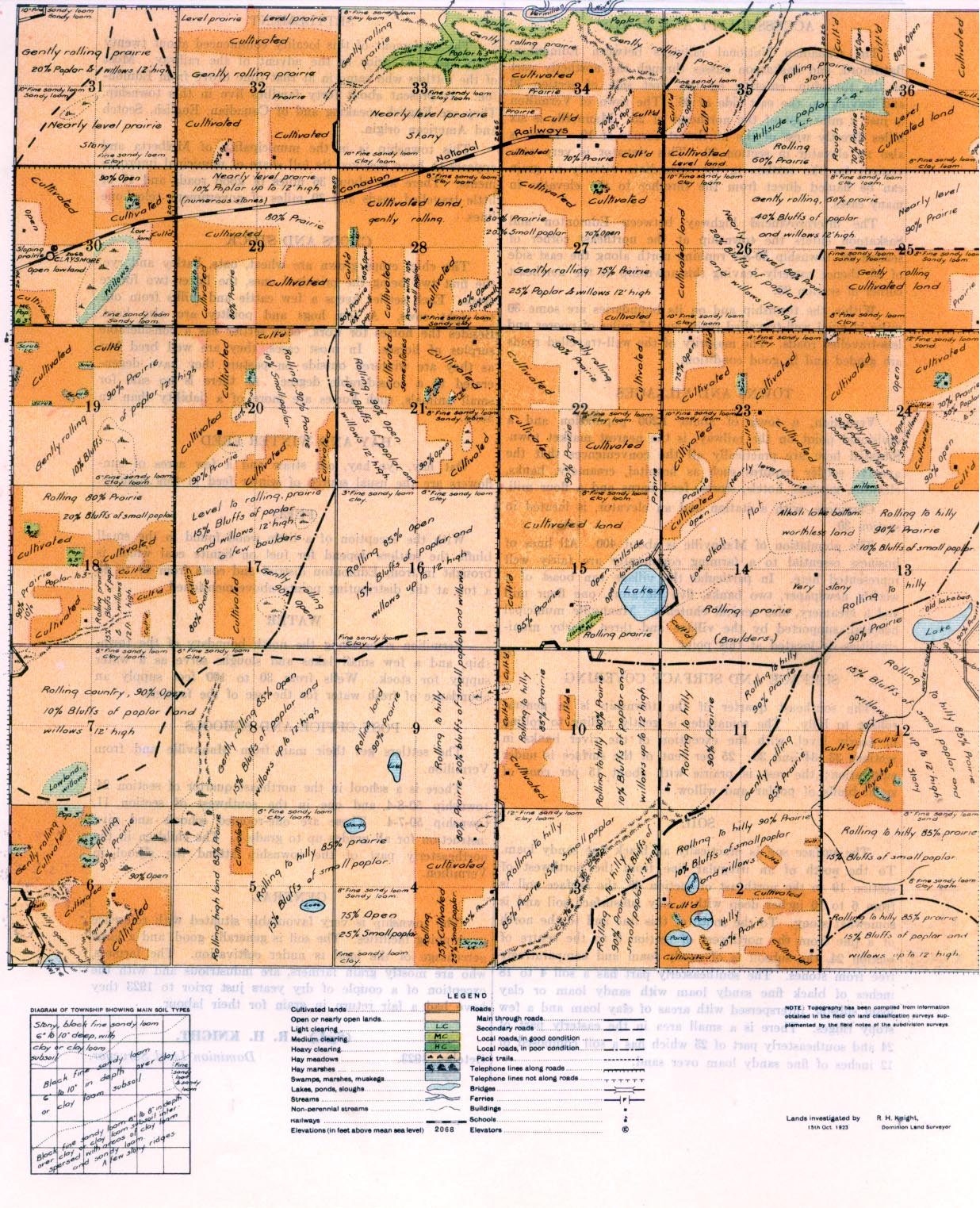 REPORT ON TOWNSHIP 50, RANGE 7, WEST OF THE FOURTH MERIDIAN

ACCESSABILITY AND ROADS
The Canadian National railways between Edmonton, Battleford, and Saskatoon passes through the northerly part of the township, entering on the west side of section 30 and leaving on the east side of 36. The town of Vermilion is just a mile east of the northeast of 25. Mannville is six miles directly west of the northwest comer of 19. There is also an elevator in section 30. This elevator is very convenient for the settlers in the immediate vicinity as grain can be hauled direct from the thresher to the elevator in many cases.
The interprovincial, highway between Edmonton and Saskatoon enters the township at the northeast comer of section 24, township 50-8-4 running north along the east side of 25, thence easterly leaving this township at the northeast corner of section 25.
Within the township and on its boundaries are some 36 miles of good well-travelled. Roads and 17 miles of poorly and less-travelled roads. The majority of the well-travelled roads are graded and in good condition.

TOWNS AND VILLAGES
Vermilion, a town of about 1,200 population and a divisional point on the railway, is the nearest market town. Situated here are practically all the conveniences that the average settler requires such as hospital, creamery, banks, elevator, garages, hotels, stores, feed barns and a flour mill.
Claymore, with a station and an elevator, is located in section 30.
The population of Mannville is about 400. All lines of business essential to a farming community are fairly well represented here. In particular the village can boast of a weekly newspaper, two banks, five elevators, one flour mill and a creamery, also several
churches. Mannville municipal hospital, supported, by the village and three nearby municipalities, is located at this point.

SURFACE AND SURFACE COVERING
The southeast quarter of the township is in general rolling to hilly. The remainder is gently rolling to rolling or nearly level, with the exception of the river banks in sections 33, 34 and, 35. 25 per cent of the surface is under cultivation; the rest is prairie with about 15 per cent of small bluffs of poplar and willow.

HAY AND WINTER FEED
Oat hay, rye hay, oat straw and a few acres of sun- flowers are the usual source of winter feed in this country.

FUEL
With the exception of a little wood, found in the small bluffs the settlers depend for fuel on lignite coal which is brought in from
Edmonton district and costs from $6 to $8 a ton at the distributing points above-mentioned.

WATER
Vermilion river along the north boundary of the township, and a few small lakes -and sloughs @erve as a water supply for stock. Wells from 30 -to 100 feet supply an abundance of fresh water for the u.9e of the farmers.

SETTLEMENT The settlement of this locality commenced about twenty years ago, just prior to the advent of the railway. Most of the settlers who came in at that time drove from Edmon- ton. At present a-bout forty families live in this township. They are English speaking and of Canadian, English, Scotch and American origin.
This township is in the municipality of Melliberta and appears to have received its full share of municipal improvement. There are about 36 miles of good roads and 17 of little travelled roads and, 30 miles of government telephone lines.

CROPS AND STOCK The chief crops grown are wheat, oats, barley and rye, the first two being the principal ones, the latter two forage crops. Each settler keeps a few cattle and milks from one to eight cows. A few hogs and poultry are also kept. Besides the horses for work, each settler has a considerable surplus of horses. In most cases, they are well bred but as they are wintered outside on pasture they have degenerated to a considerable degree. As there is no sale for small animals, such homes are more of a liability than an asset.

HAY AND WINTER FEED
Oat hay, rye hay, oat straw and a few acres of sunflowers are the usual source of winter feed in this, country.

POST OFFICE AND SCHOOLS
The settlers get their mail from Mannville and from Vermilion. There is a school in the northeast quarter of section 24, township 50-8-4 and one in the southwest of section 11, township 50-7-4. These are one-roomed schools and give instruction for all grades up to grade 9. The children in the northeasterly part of the township attend the school in Vermilion.

GENERAL The township is very favourably situated with reference to shipping facilities. The soil is generally good, and a large percentage of the land is under cultivation. The farmers, who are mostly grain farmers, are industrious and with the exception of a couple of dry years just prior to 1923 they have had a fair return in grain for their labour.
October, 1923.