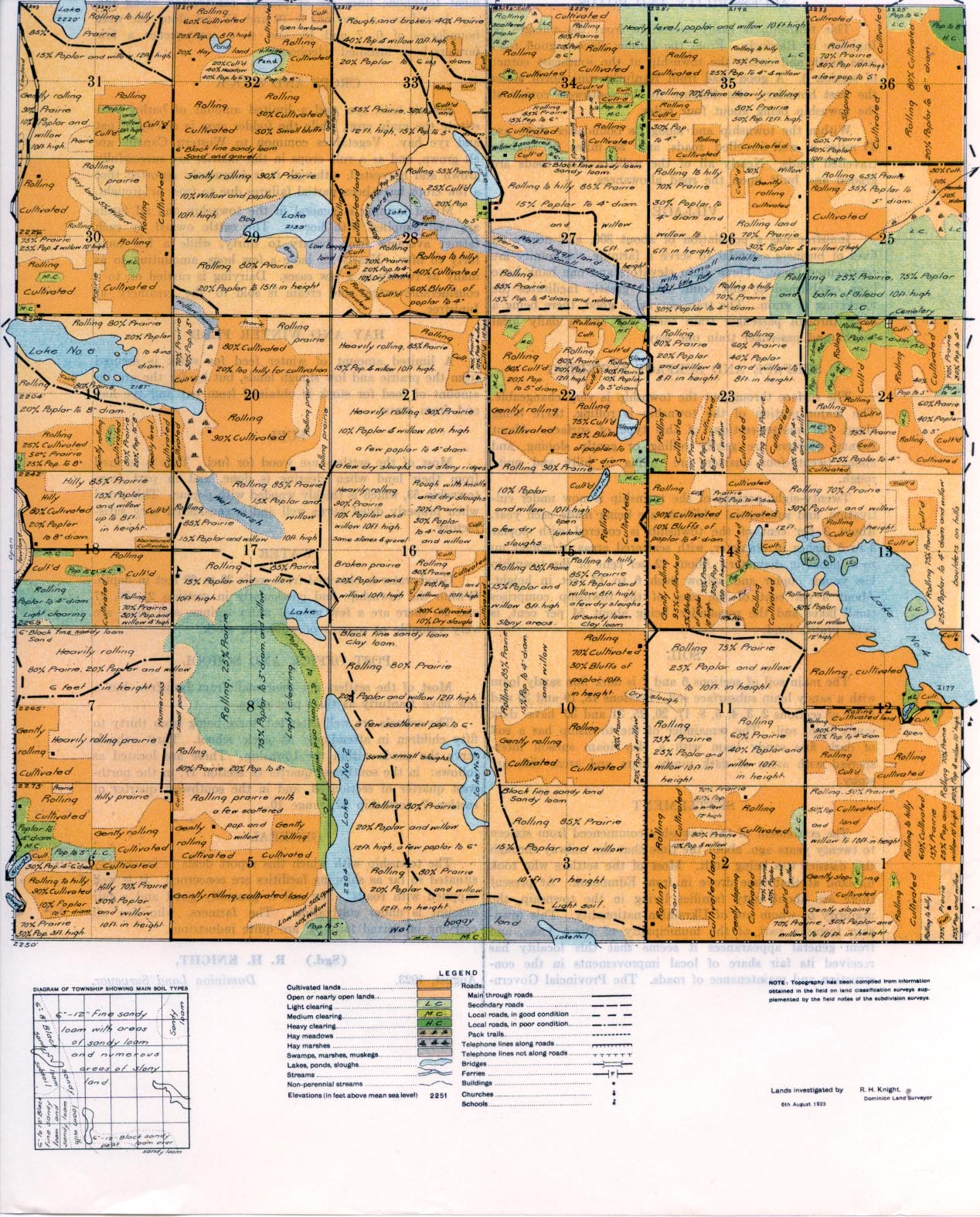 REPORT ON TOWNSHIP 52, RANGE 11, WEST OF THE: FOURTH MERIDIAN

VILLAGE
Innisfree has a population of about 300, and nearly all lines of business essential to serve a farming community are represented there. Three grain elevators and one bank have been established at this point, which greatly facilitates the marketing of grain. The train service is good, there being a daily through passenger train each way and a daily local freight and passenger train one way.

SETTLEMENT
The settlement of this township commenced from sixteen to twenty years ago, about the time that the railway through this district was being built. Most -of the settlers who took. up land at. that time drove in from Edmonton. At present there are about sixty families living in the township, the majority of whom are of Ukrainian nationality. This town- ship forms, a part of the municipality of Birch Lake, and from general appearances it seems that this locality has received its fair share of local improvements in the construction and maintenance of roads. The Provincial Government telephone lines are at present constructed along the east boundaries of sections 3, 10 and 15 and along the west boundaries of 6, 7 and 18, and as a consequence a few farmers have installed telephones.

CROPS AND STOCK
Wheat, oats, rye, and a limited amount of barley constitute the grain crop, while the fodder crop is chiefly of oat end rye hay. Vegetables common to Western Canada are all grown, and as a rule crops in this district are successfully grown and harvested,
although it is commonly reported that a few crops have been partial failures due to frost or drought.
Mixed farming is general in the township and all farms are well supplied with horses. The cattle owned by each farmer averages from twenty to thirty, while a few have forty to fifty. Nearly all have a few hogs, amounting to as many as twenty in a few cases. Dairying is carried on to a considerable extent and cream is sold to the creamery at Innisfree.

FUEL
Most of, the settlers use wood for fuel. This is secured from their land when clearing is done, and in part from township 53, which is thickly wooded with poplar. This wood when properly dried burns well and is considered very satisfactory

WATER
Good water is obtained from wells 20 to 60 feet in depth. Within the' township, and particularly in sections 25, 26, 27 and 28, there are a few natural water springs, and these are very valuable as sources of water for stock.

GENERAL
The township with which this report deals is favourably situated so far as shipping facilities are concerned. It is well supplied with roads. The soil is generally good and a fair amount is under cultivation. The farmers, who are all carrying on mixed farming, are quite industrious.