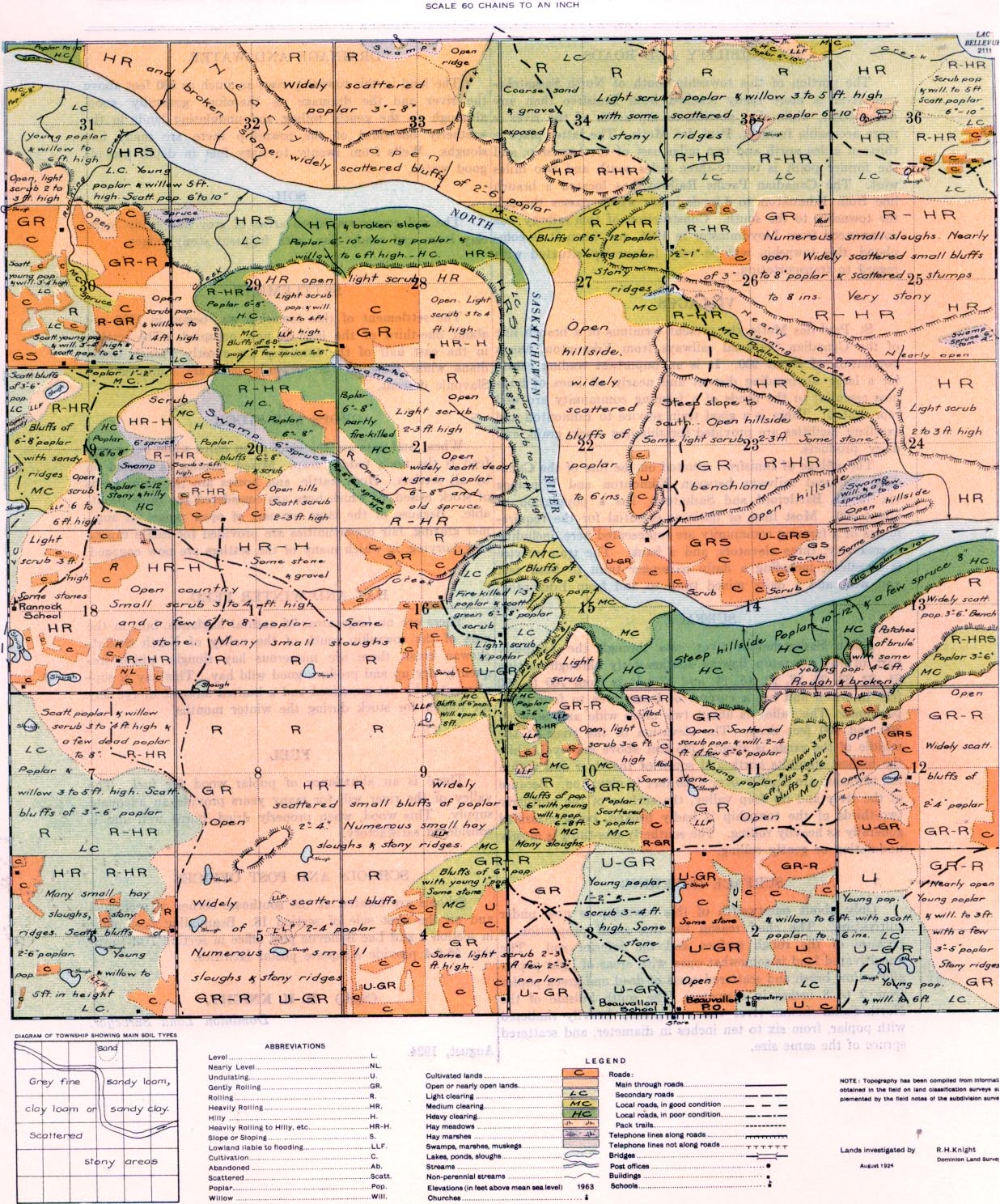 REPORT ON TOWNSHIP 55, RANGE 10, WEST OF THE FOURTH MERIDIAN

ACCESSABILITY AND ROADS
The portion of this township south of North Saskatchewan river is more easily reached from Innisfree than any other point, while that portion to the north of the river is more accessible from St. Paul des Metis. The latter place is thirteen miles north and two miles east of the township, and the former point is twenty-three miles south and two miles west. The Canadian Pacific Railway has located a branch line from Edmonton to Lloydminster which passes through the township to the south. Construction of this railway was commenced from Lloydminster in 1924, and when it is completed, this township will be very favorably situated with regard to transportation.

VILLAGES
St. Paul des Metis, the present terminus of a branch line of the Canadian National railways from Edmonton, has a population, of about 900. It is an important trading centre for a large surrounding district and nearly all lines of business essential to the needs of a farming community are well represented. There is a good train service to Edmonton and excellent facilities are provided, 'for shipping stock, grain, and dairy products.
The village of Innisfree, situated on the line of the Canadian National railways between Edmonton and Winnipeg via North Battleford and Saskatoon, has a population of about 300. Most lines of business essential for the requirements of a farming community are represented here, including a creamery, three elevators, and a bank. The train service is excellent, including a daily passenger train to both east and west and a daily mixed train to and from Edmonton.

SURFACE I
North Saskatchewan river cuts through the northerly part of this township flowing southeasterly through section 31, 32, 33, 28, 27, 22, 15, 14, and 13. It is from 700 to 900 feet in width and has a current of from three to four miles per hour. The valley is about two miles wide and between 300 and 400 feet deep. The elevation of the river at the middle of the range is about 1,745 feet above sea-level, while the highest summits north and south of the river and within the township are slightly over 2,250 feet in, elevation. Because of the river and its deep valley, the surface of the northerly two-thirds of the township is badly broken, being classified generally as heavily rolling. The southerly one-third is mostly undulating or gently rolling.

SURFACE COVERING
Only about one-twelfth of this township is now under cultivation. The chief reason for this small proportion is because of the rough surface and the inferior soil. The uncultivated land is somewhat open with areas of light poplar and willow brush and scattered areas of dead and green poplar from 2 to 8 inches in diameter. The south hillside of the North Saskatchewan river valley is mostly heavily timbered with poplar, from six to ten inches in diameter, and scattered spruce of the same size.

DRAINAGE AND WATER
The land in this town-ship rises as much as 500 feet above 1e river and the drainage is therefore generally good, although on the gently rolling and undulating lands in the southerly one-third of the township there are many hay sloughs. Wells from twenty to sixty feet in depth provide good water.

HAY AND WINTER FEED
There are no large areas of natural haylands, but, in the part of the town-ship south of the valley of North Saskatchewan river, there are numerous hay sloughs which frequently dry up and produce good wild hay. This hay is supplemented by oat greenfeed and a limited amount of rye hay for fodder for stock during the winter months.

FUEL
There is an abundance of poplar wood for fuel. The valley of the river will for many years provide an adequate supply. This wood, when properly dried, bums well and is considered satisfactory.

SETTLEMENT
The settlement of this township was begun in 1908 and about one-third of the land is now occupied. The settlers in the east half of the township axe mostly French Canadians while those in the westerly part are Europeans of Slavonic descent.

CROPS AND STOCK
Wheat and oats are the chief grain, crops while oat greenfeed is the main fodder crop. Mixed farming is carried on by all settlers. Hogs, cattle, and horses are the chief kinds of stock raised, of which hogs are considered the most profitable. Because of the large amount of open range for summer grazing, fair opportunities are provided for cattle raising and dairying, in which many of the settlers are now engaged.