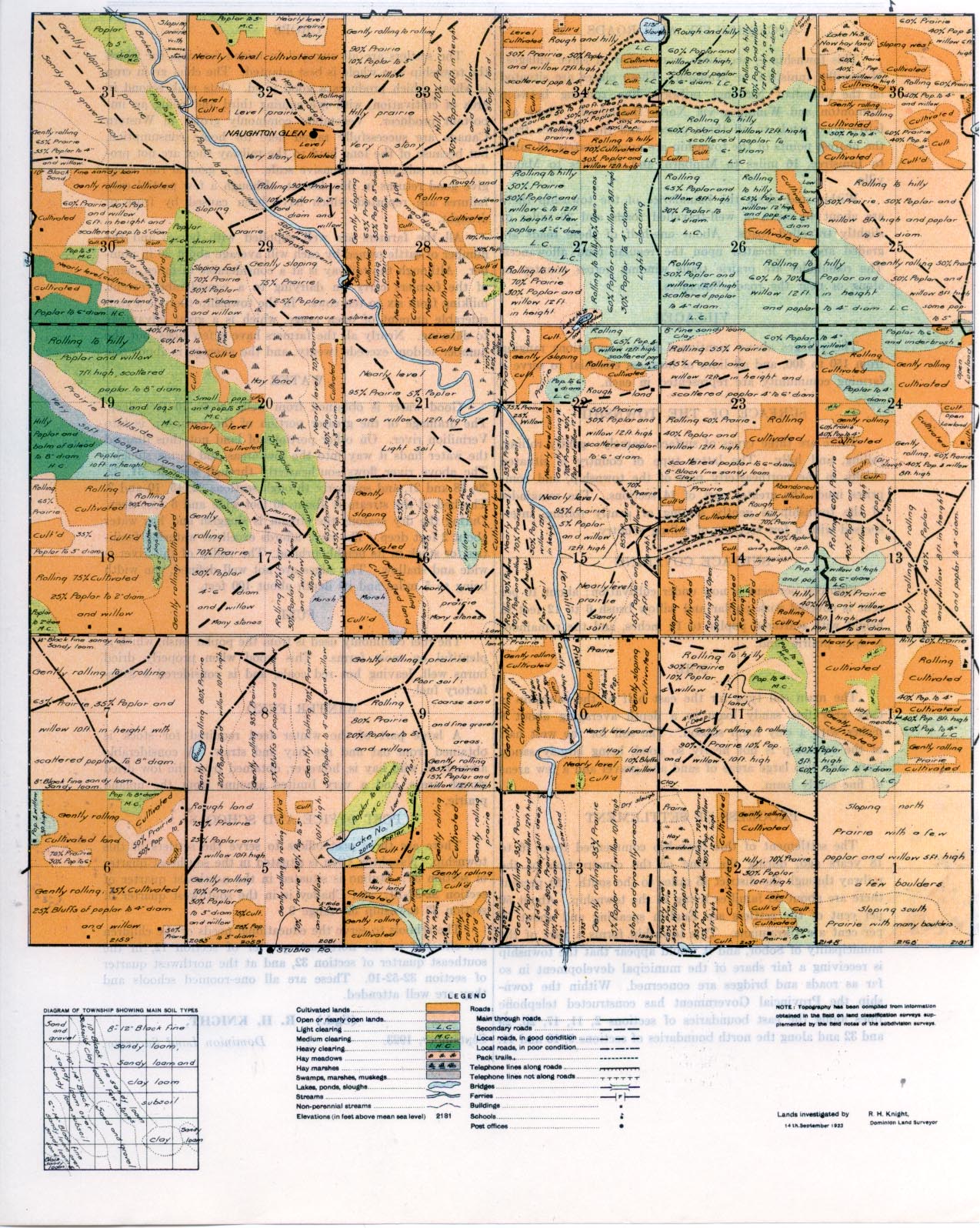 REPORT ON TOWNSHIP 53, RANGE 10, WEST OF THE FOURTH MERIDAN

ACCESSIBILITY AND ROADS
This township is accessible from either of three villages: Mannville, Innisfree, or Minburn. These places are situated on the Canadian National railways line running between Edmonton and Winnipeg via North Battleford. There are fairly good roads to all three places, and the distance from the nearest points of the township are approximately 13 miles to Innisfree, 16 miles to Minburn, and 19 miles to Mannville.
Within and along the boundaries of the township there are about 40 miles of well-travelled roads and 20 miles of slightly travelled roads. About one-half of these roads are graded and are located upon the regular road allowances. The remainder are prairie trails winding across country or along or near the road allowances.

VILLAGES
The villages above mentioned have populations ranging from 150 to 400, and all lines of business essential to serve a farming community are represented in each.

ACCESSIBLY
Within and along the boundaries of the township there are about 40 miles of well travelled roads and 20 miles of slightly travelled roads. About one-half of these roads are graded and are located upon the regular road allowances. The remainder are prairie trails winding across country or along or near the road allowances.
..
SURFACE OF THE TOWNSHIP
There are three types of surface, namely: gently rolling, rolling, and hilly. The latter type of country is situated chiefly in the northeasterly part of the township, and comprises much the greater part of 14 sections. The remainder of the township is gently sloping or gently rolling, interspersed with a few sections of rolling country

SURFACE COVERING
Eighteen per cent is now under cultivation; about 10 per cent is covered with poplar and willow brush 6 to 12 feet in height with scattered poplar to 14 inches, and the remainder is open prairie land

PROGRESS OF SETTLEMENT
The settlement of this township commenced from 16 to IS years ago, during the time of the construction of the railway through the district 15 miles to the south. At present there are about 45 families living in the township. About 50 Percent of the settlers are English speaking and about 50 percent are Ukrainians. This township forms a part of the municipality of Sobor, and it would
appear that the township is receiving a fair share of the municipal development in so fir as roads and bridges are concerned. Within the town- ship the Provincial Government has constructed telephone lines along the east boundaries of sections 2, 11, 17, 20, 29 and 32 and along the north boundaries of sections 9, 10 and 11.

CROPS
The settlers are all engaged in mixed farming, for which the township as a whole is best adapted. The chief grain crop is wheat, which produces a good yield. Oats rank second in area of cultivation, with rye coming third and being an important producer. Vegetables commonly grown in Western Canada are successfully raised here for home consumption, but because of the long haul to the railway they are not produced for sale on an extensive scale. As a general rule crops give good returns in this district, although a few partial crop failures are reported which have been caused by frost or drought.
All the farmers are well supplied with horses and the number of cattle owned by each will average about 30 in number. Although the railway is at a considerable distance, many of the farmers carry on dairying to a considerable extent, milking from six to ten cows. In the township there is a considerable amount of open range, which is a great advantage to dairying. Nearly all the farmers have a few hogs, but the number seldom exceeds twenty, and the average is about ten.

WATER
Good water is obtained from wells 20 to 70 feet deep. The drainage of the greater portion of the township is into Vermilion river. On other portions of land not thus drained the water finds it way into the low areas and forms sloughs. The above river flows southeasterly through sections 31, 32, 29, 28 and 21, and southerly through sections 22, 15, 10 and 3. The bed of the stream is about 40 feet wide and 6 feet deep. During the dry seasons the stream is sluggish and has water about 2 feet deep. The river affords excellent watering facilities for stock in its neighbourhood. The valley of this river is wide and shallow. The edges are not well defined, the width being to 5 miles and its depth about 100 feet.

FUEL
The fuel commonly used is from the poplar bush, which is plentiful on most farms. This wood when properly dried burns well, leaving hot red coals, and is considered a satisfactory fuel.

WINTER FEED
A large part of the winter feed required for stock is obtained from oat and rye hay and straw. A considerable amount of wild hay is, however, obtained from the low dried s1lough areas, and a very limited amount from the upland prairie.