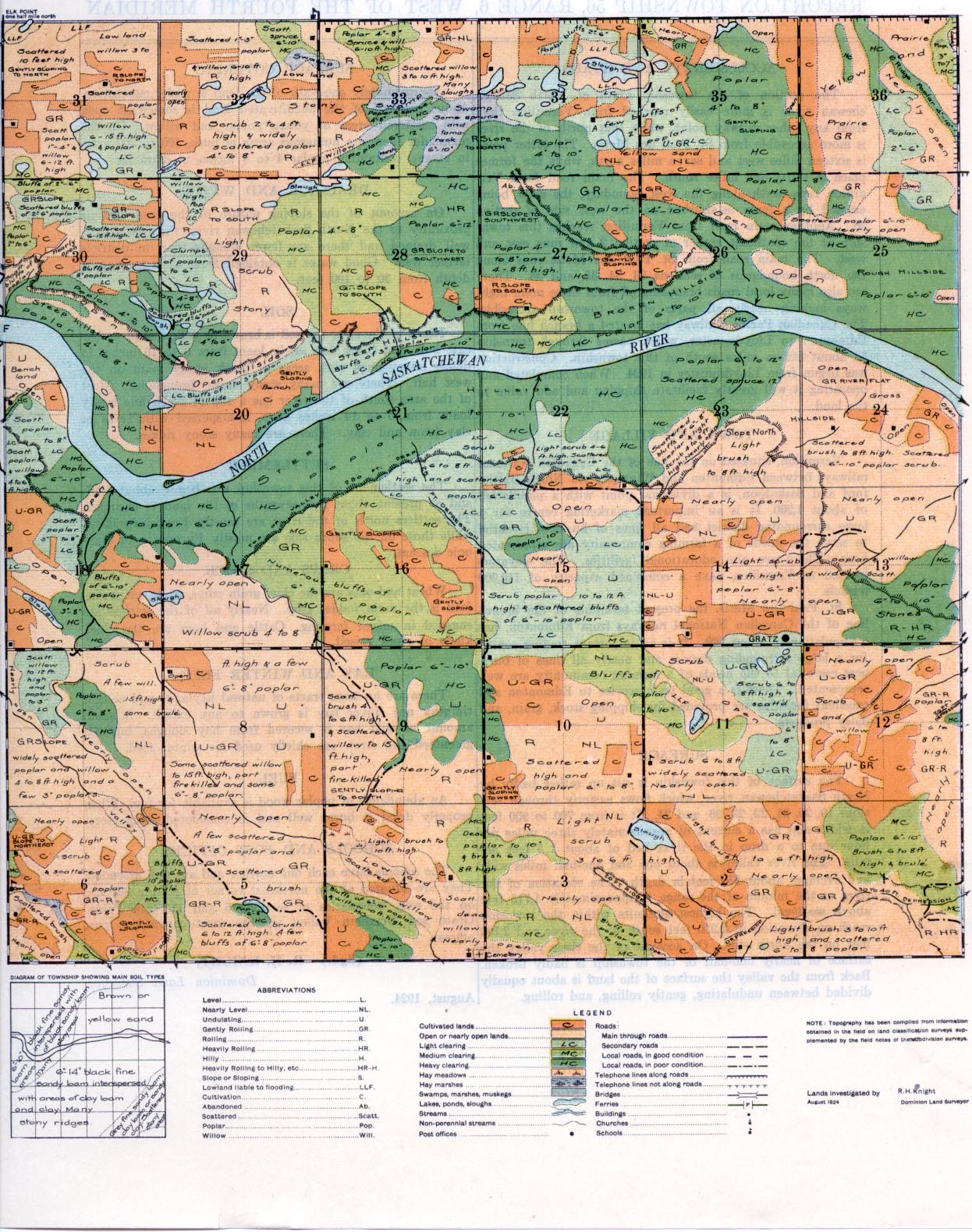 REPORT ON TOWNSHIP 56, RANGE 6, WEST OF THE FOURTH MERIDIAN

ACCESSABILITY AND ROADS
The portion of the township south of North Saskatchewan river is more easily reached from Vermilion than from any other railway point, while that north of the river is more accessible from St. Paul des Metis. The latter point is sixteen miles west and seven miles north, while the former place is thirty-one miles south. The main road from Vermilion runs north along the west boundary, the river being crossed by a ferry established on the west side of section 30. Another main road from Vermilion reaches this township at the southeast corner of section 2 and runs east and west. The main road from St. Paul des Metis runs along the north boundaries of sections 33, 34, 35, and 36. There are also many local roads branching off from there main highways making nearly all parts of the township accessible. The Canadian Pacific Railway has located a branch line from Edmonton to Lloydminster, which passes through township 53 about fifteen miles south of this township. Construction was begun from Lloydminster in 1924. When completed and operating it will greatly facilitate shipping and add value to the land.

SURFACE
The surface of this township is cut up rather badly by North Saskatchewan river, which flows easterly through sections 19, 20, 21, 22, 23, 26, and 24. It is from 700 to 900 feet in width and has a current of approximately three miles per hour due to a drop in the river bed of about 1.5 feet per mile. The river valley is about one and one-half miles wide and averages about 350 feet in depth. The elevation of the river at the middle of the range is approximately 1,715 feet above sea-level. The highest summits within the township reach an elevation of 2,250 feet south of the river and 2,100 feet on the north side. On account of the river valley the surface of nearly one-half of the township is badly broken. Back from the valley the surface of the land is about equally divided between undulating, gently rolling, and rolling.

SETTLEMENT
The settlement of this township was begun about 1907, and at present about four-sevenths of the land is occupied. The settlers north of the river are mostly English-speaking, while those on the south side are mostly Europeans, of Slavonic descent.

CROPS AND STOCK
Wheat and oats are the chief grain crops, while oat green-feed is the main fodder crop. Nearly all of the settlers are engaged dn mixed farming. Cattle and hogs are the chief kinds of stock raised.

HAY AND WINTER FEED
There are no large tracts of natural, haylands and neither timothy nor clover hay is grown to any extent. A small amount of wild hay is secured from hay sloughs, but oat greenfeed and straw are chiefly used for winter feed.

SURFACE COVERING
Approximately one-sixth of the land is under cultivation. About one-half of the uncultivated land is somewhat open with scattered areas of young poplar and willow. On the remainder there are numerous areas of bush, 100 to 200 acres in extent, containing poplar 4 to 8 inches in diameter.

DRAINAGE AND WATER
On account of the sloping nature of the land and its proximity to the North Saskatchewan river, the township is well drained and there are fewer sloughs than in districts farther west. Good water is obtained from wells ranging in depth from 30 to 100 feet.

SOIL
North of the river the soil is brown or yellow sand on the east half, and black fine sandy loam from 6 to 10 inches in depth interspersed with areas of black sandy loam on the west half. There are many stony areas throughout. Most of the area south of the river has a soil of black fine sandy loam from 6 to 14 inches deep, interspersed with areas of clay loam and clay. There are many stony ridges.

An abundance of poplar wood is available for fuel. When Properly dried it burns well and is considered satisfactory.

SCHOOLS AND POST OFFICES
The schools have each one teacher and are well attended. They are situated at the northeast comer of section 32, and on the west boundaries of sections 6 and 11. Elk Point, Gratz and Northern Valley are the most convenient post offices.