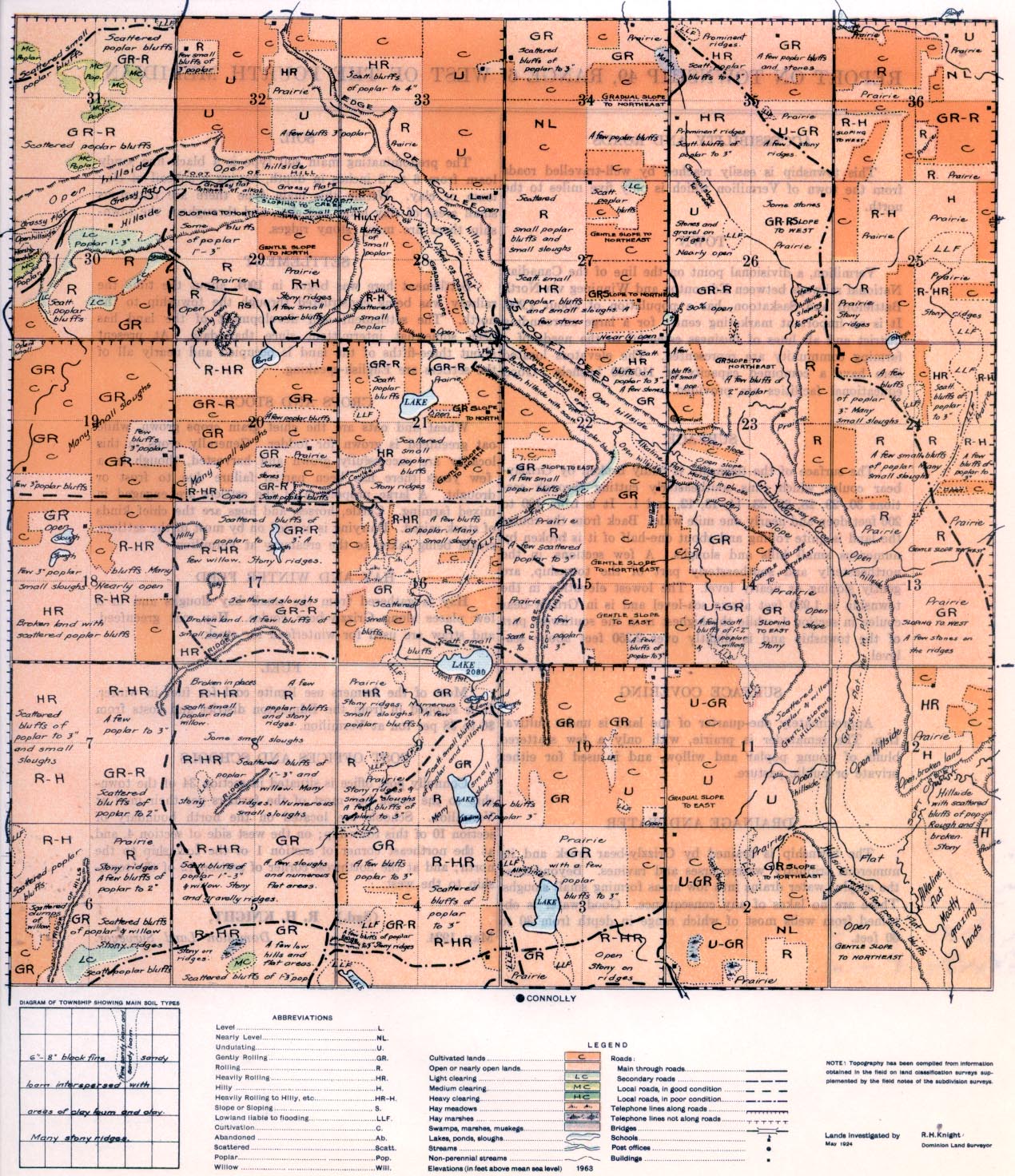 REPORT ON TOWNSHIP 49, RANGE 6, WEST OF THE FOURTH MERIDIAN

ACCESSIBILITY AND ROADS
This township is easily reached by well-travelled roads from the town of Vermilion which is only five miles to the north.

TOWN
Vermilion, a divisional point on the line of the Canadian National railways between Edmonton and Winnipeg via North Battleford and Saskatoon, has a population of about 1,200. It is an important marketing centre for a large surrounding district and all lines of business essential to the needs of a farming community are represented. The elevators located here have a combined capacity of 110,000 bushels. Good educational facilities are provided.

ACCESSIBILITY AND ROADS
The surface of the township is badly broken by Grizzly bear coulee which turns southeasterly cutting through sections 30, 29, 28, 22, 23, 14, 13, 12, and 1. It is from 100 to 200 feet deep and nearly one mile wide. Back from the coulee the land is quite Tolling and about one-half of it is broken by numerous small hills and sloughs. A few sections, in the northeasterly and southeasterly part of the township, are gently sloping or nearly level. The lowest elevation in the township is 1,930 feet above sea-level and is in Grizzly-bear coulee in section 1, while the highest is in the southwest part of the township and is slightly over 2,250 feet above sea-level.

SURFACE COVERING
Approximately one-quarter of the land is under cultivation. The remainder is prairie, with only a few scattered bluffs of young poplar and willow, and is used for either private or public pasture.
The township is drained by Grizzly bear creek and its numerous tributary watercourses and ravines. Beyond these the surplus water drains into low areas forming small sloughs. There are no lakes of any consequence. Good water is obtained from wells most of which range in depth from 30 to 00 feet.

SOIL
The predominating main soil type is a black fine sandy loam from 6 to 8 inches in depth, having a subsoil of clay loam or clay. Within this main type there are numerous small areas of clay loam and clay, and throughout the township there are many stony ridges.

SETTLEMENT
Settlement here was begun in 1904, about the time the railway was being constructed through the township to the north. The settlement and development of the land has been somewhat intermittent since that date. At present about three-fifths of the land is occupied and nearly all of the settlers are English-speaking.

FUEL
Most of the farmers use lignite coal for fuel in winter. It is shipped in from the Edmonton district and costs from $6 to $8 per ton at Vermilion.

CROPS AND STOCK
Wheat and oats are the chief grain crops grown, while oat greenfeed is grown for fodder. Generally crops in this locality are
successfully grown and harvested, though in a few years there has been partial failure due to frost or drought. A large proportion of the settlers are engaged in mixed farming. Cattle, horses, and hogs are the chief kinds of stock raised. Dairying is carried on by most of the settlers, cream being taken to the creamery at Vermilion.

HAY AND WINTER FEED
Hay is gathered from the small hay sloughs and in a few places along Grizzly-bear coulee. Hay, oat greenfeed, and straw axe used for winter feed for stock.