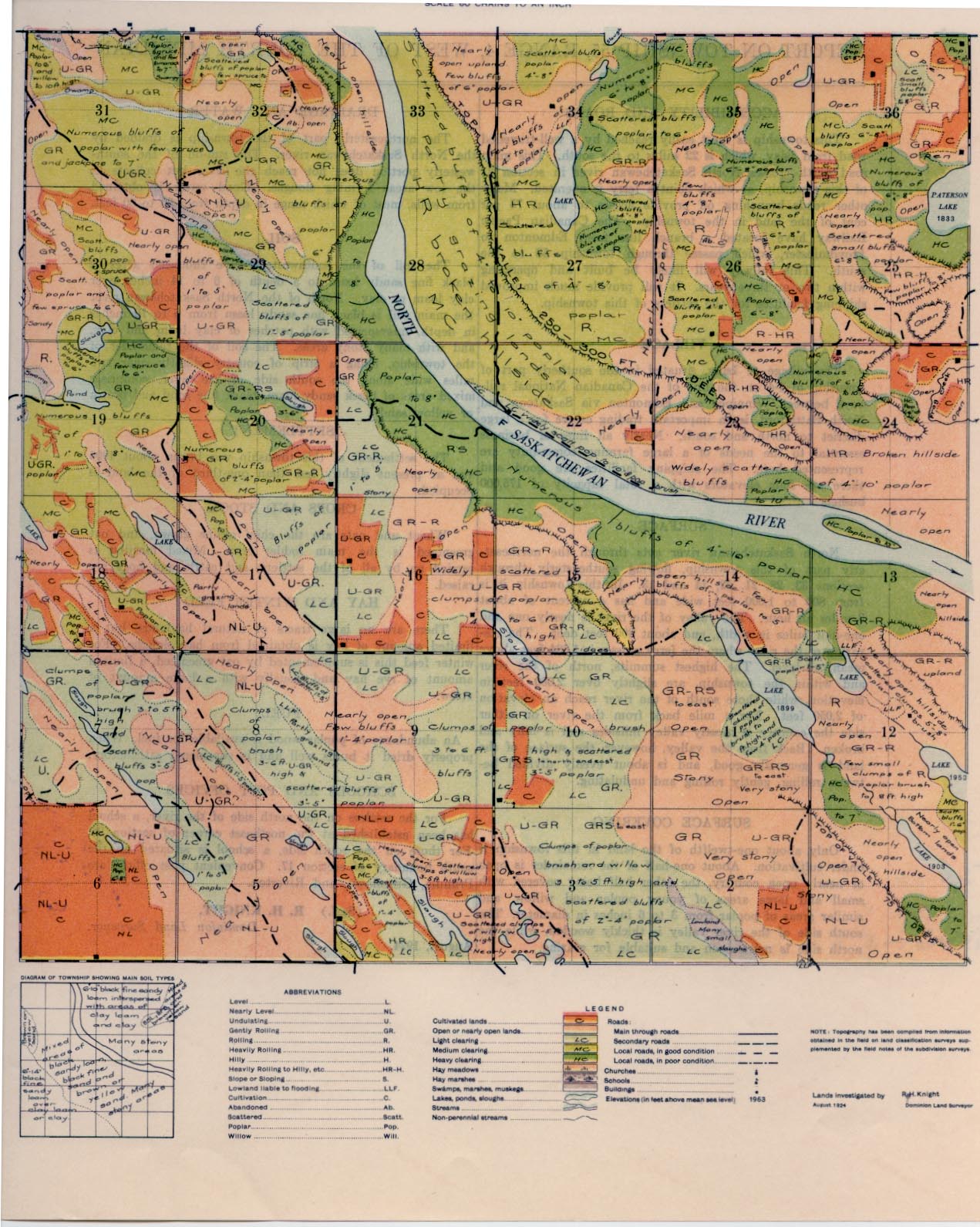 REPORT ON TOWNSHIP 55, RANGE 4, WEST OF THE FOURTH MERIDIAN

This township is most easily reached by a well-travelled road from Islay, which is 22 miles to the south. This main road north crosses North Saskatchewan river in section 21 of this township, at which point a ferry is operated. Many other roads branching off provide access to about 75 per cent of the land in the township. The Canadian Pacific Railway have located a branch line from Edmonton to Lloydminster, which passes through township 53 to the south. This railway will likely be built and operating within two or three years. It will provide much improved shipping facilities for the settlers of this township.

The village of Islay, situated in the southerly part of township 51-4-4 on the line of the Canadian National rail­ways between Winnipeg and Edmonton via Saskatoon and North Battleford, is an important trading centre for a large district to north and south. Nearly all lines of business essential to the needs of a large farming community are represented here. The shipping facilities are good land there are four 'elevators with a total capacity of 175,000 bushels.

North Saskatchewan River cuts through the northeast­erly part of this township, flowing southeasterly through sections 33, 28, 21, 22, 14 and 13. In this township it is from 800 to 1,000 feet wide and has a current of about 3 miles an hour. The valley of the river is nearly one and one-half miles in width, and about 300 feet deep. The ele­vation of the river where the ferry crosses is 1,684 feet above mean sea-level. The highest summits, north of the river and within the township, are slightly over 2,000 feet in elevation, while those south of the river reach an elevation of 2,050 feet. For a mile back from the river on either side the country is mostly valley hillsides and is hilly and broken. Back from the valley, however, the surface of the land is generally good, and is about evenly divided be­tween rolling, gently rolling and undulating.

The northeasterly part of the township is drained by the North Saskatchewan River. The run-off of the south­westerly portion does not reach the river but collects in the low areas forming sloughs. Good water is obtained from wells, most of which range in depth from 30 to 60 feet.

The soil of the southwesterly five thousand acres is black fine sandy loam to a depth of 6 to 14 inches over clay loam or clay. North of the North Saskatchewan River the main soil is black fine sandy loam from 6 to 10 inches in depth, interspersed with patches of clay loam and clay, and with many stony areas. The soil of the remainder of the township, being a strip of country slightly over two miles wide along the south side of the river, comprises mixed areas of black sandy loam, black fine sand and brown or yellow sand.

The settlement of this township was begun about 1906 and at present slightly less than one-third of the land is occupied.

Wheat and oats are the chief grains grown, and oat greenfeed is the main fodder crop. Mixed farming is carried on by all of the settlers, and cattle and hogs are raised.

An abundance of poplar wood is available for fuel. When properly dried it burns well and is considered satisfactory.

For the settlers on the north side of the river, a school has been established at the northeast corner of section 26. For those on the south side, a school is situated on the south boundary of section 17. Convenient post offices are Primula, Greenlawn, and Riverton.

Only about one-twelfth of the land in this township is under cultivation. About one-half of the remainder is open or nearly open country, the other half being covered with small and large areas of young poplar and willow, and similar areas of poplar from 3 to 6 inches in diameter. The south side of the river valley is thickly wooded, while the north side is more open and suitable for grazing.