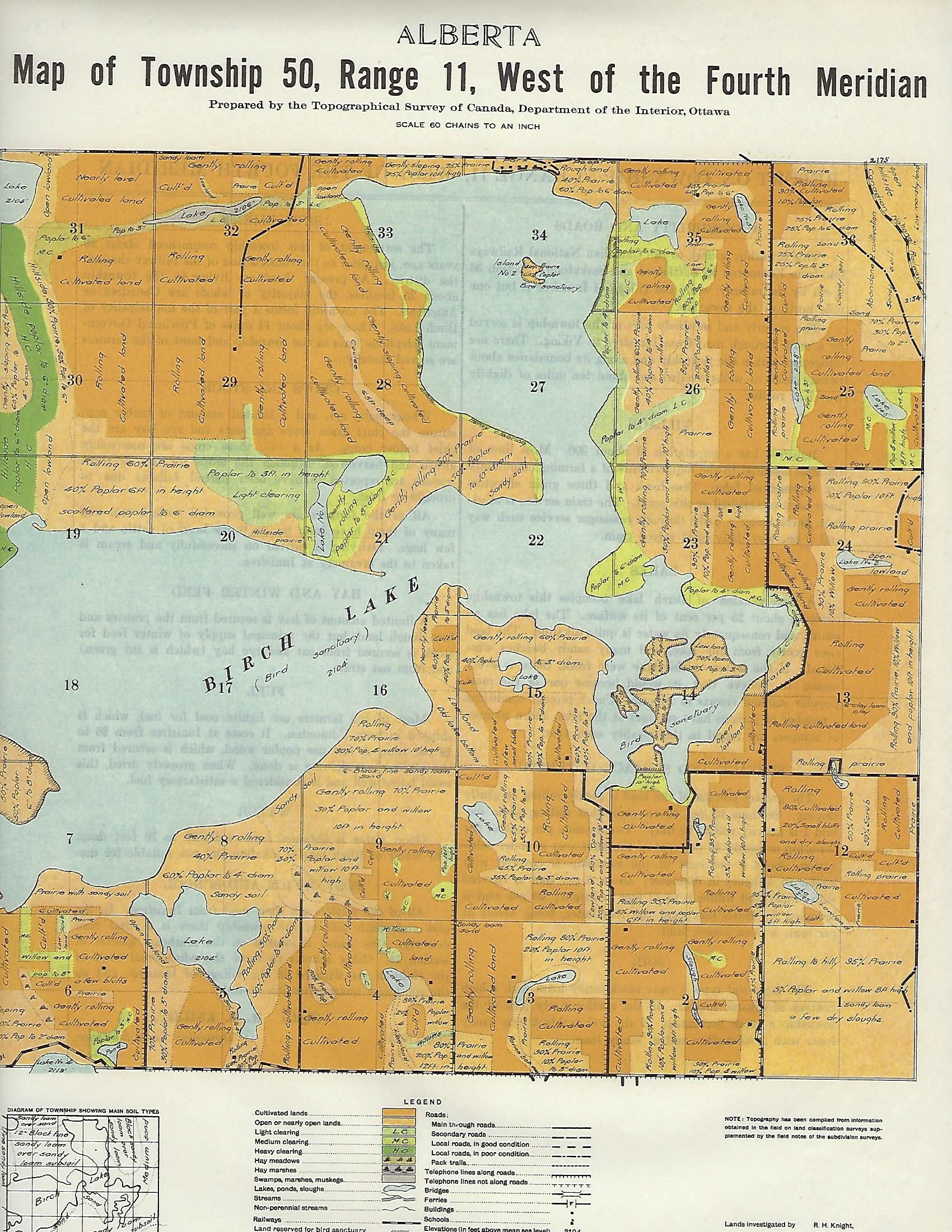 WEST OF THE FOURTH MERIDIAN REPORT ON TOWNSHIP 50, RANGE 11,

ACCESSIBILITY AND ROADS
This township is close to the Canadian National Railways line from Edmonton to Battleford and Saskatoon. Section 36 is cut by the railway, while the village of Innisfree is but one mile north of the township. The easterly and southerly part of the township is served by a main through road from Innisfree to Viking. There are altogether within the township and along its boundaries about twenty miles of well-travelled and about ten miles of slightly travelled roads.

VILLAGE
Innisfree has a population of about 300. Most lines of business essential to the requirements of a farming community are represented here. One bank and three grain, elevators have been established at this point. The train service is excellent, there being a daily through passenger service each way and a one-way daily local mixed train.

LAKES
A large portion of Birch lake occupies this township, covering about 25 per cent of its surface. The lake has no outlet, and consequently its water is quite alkaline. The land rises gently from the lake, and many sandy beaches were noted. If the water of this lake were fresh, there is every reason to believe that it would become one of the most popular summer resorts-in Alberta. Under present
conditions a number of persons have cottages at the lake, and a number of campers are found in this locality each year.
The greater portion of the land is gently rolling or gently sloping., Sections 12 and 36 are somewhat rolling, while section 1 is heavily rolling to hilly. Twenty-nine per cent of tile township or nearly 40 per cent of the land area is under cultivation, about 6 per cent of the township is covered with poplar to 4 inches in diameter; about 6 per cent is covered with poplar and willow 6 to 12 feet in height; 25 per cent is occupied by Birch lake, and the remainder, being about 34 per cent, is open prairie land.

SETTLEMENT
The settlement of this township commenced about 20 years ago, just prior to the construction of the railway through the district. At present there are living in the township about 25 families, the majority of whom are Canadian or American. The township forms a part of the municipality of Birch Lake. There are about 14 miles of Provincial Government telephone lines in the township and most of the farmers are served thereby.

CROPS AND STOCK
Wheat, oats, rye, and a limited amount of barley constitute the chief grain crops and oats and rye hay are the chief fodder crops. As a rule these crops are successfully grown and harvested, although the crops for two or three seasons are reported to have been partial failures due to drought or frost.
All of the farmers are well provided with horses and many of them have from ten to thirty head of cattle and a few hogs. Dairying is carried on successfully and cream is taken to the creamery at Innisfree.

WATER
Good water is obtained from wells 20 to 70 feet deep. The water of Birch lake is alkaline and not suitable for use.

POST OFFICE AND SCHOOL
All of the settlers get their mail from Innisfree. In the I east and south side of the township there is a rural mail

HAY AND WINTER FEED
A limited amount of hay is secured from the prairies and low slough land, but the principal supply of winter feed for stock is secured from oat and rye hay (which is cut green) and from oat straw.

FUEL
Most of the farmers use lignite coal for fuel, which is shipped in from Edmonton. It costs at Innisfree from $6 to $8 per ton. A few use poplar wood, which is secured from the bluffs when clearing is done. When properly dried, this wood burns well and is considered a satisfactory fuel.

POST OFFICE AND SCHOOL
All of the settlers get their mail from Innisfree. In the east and south side of the township there is a rural mail delivery. One school is located on the southeast quarter of section 14. Other schools to serve the educational need of the, children are situated in the village of Innisfree and on the southwest quarter, section 31-49-11.
July, 1923