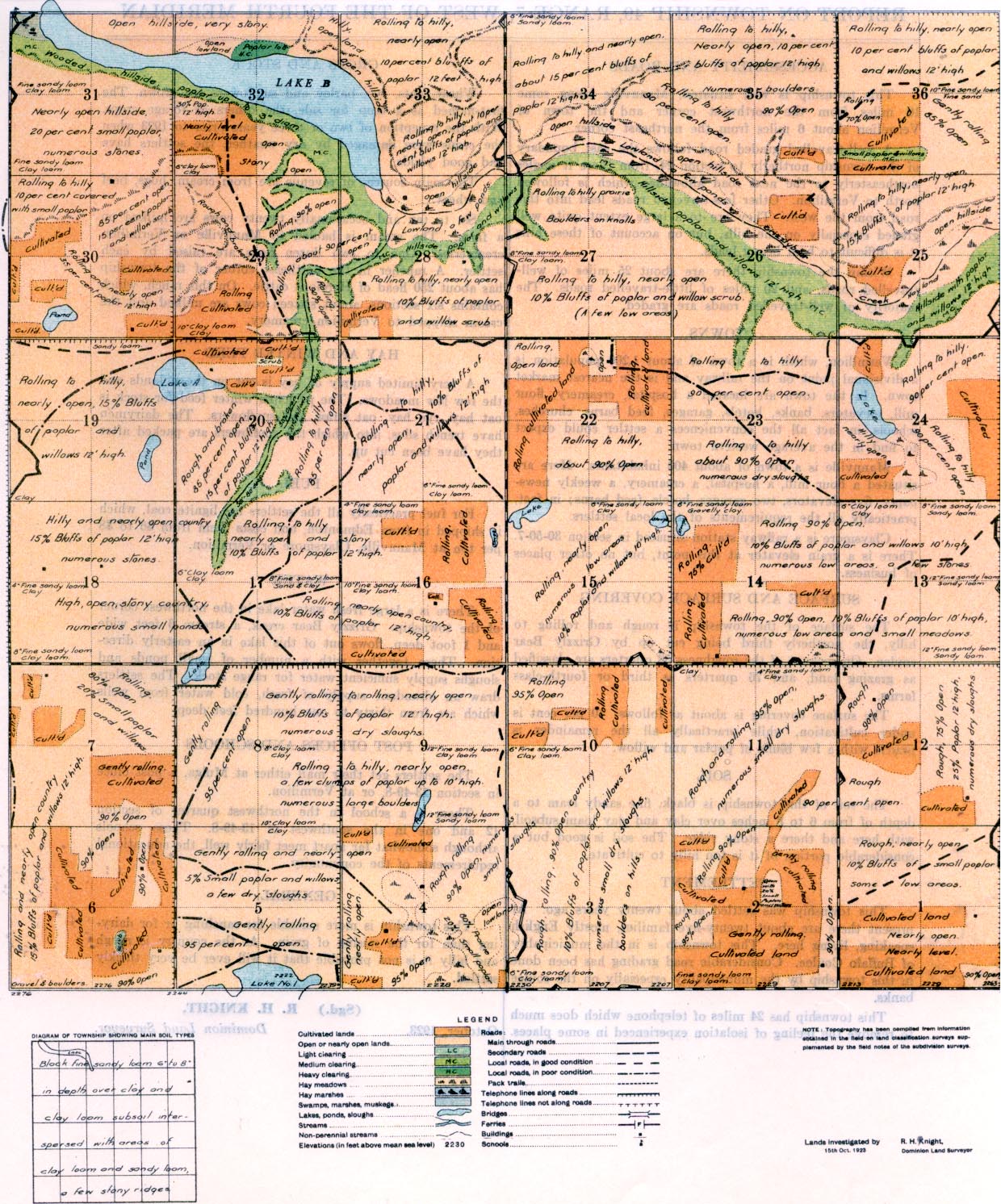 REPORT ON TOWNSHIP 49, RANGE 7,WEST OF THE FOURTH MERIDIAN

TOWNS
Vermilion, which is a town of about 1,200 population is a divisional point (in the railway) and is the nearest market town. In the town are located a hospital, creamery, flour mill, elevators, banks, hotels, garages, feed barns, churches, schools, in fact all the conveniences a settler could expect to find in the average western town.
Mannville is a town of about 400 inhabitants. Here are situated a flour mill, a hospital, a creamery, a weekly news- paper, five elevators, two garages, hotels, feed barns; in fact, practically all the requirements of the local settlers.
Claysmore is a railway station situated in section 30-50-7. There is a grain elevator at this point, but no other places of business.

SURFACE AND SURFACE COVERING
The surface of the township is rough and rolling to hilly, the northerly third being cut up by Grizzly Bear coulee. On account of the roughness 58 quarters are classified as grazing land, and 76 quarters as third or fourth-class farms.
The surface covering is about as follows: 10 per cent is under cultivation, while practically: all the remainder, is prairie with a few bluffs of poplar and willow.

SOIL
The soil of this township is black, fine sandy loam to a depth of from 6 to 8 inches over clay and clay loam subsoil, with here and there a stony ridge. The soil is good but a considerable portion of it is too hilly to cultivate.

CROPS AND STOCK
Wheat, oats, rye, barley and sunflowers are grown. The first-named as a crop for sale, the others as forage crops. With the exception of two or three years prior to 1923 when the crops were damaged by dry weather, the settlers have had good yields. The main sources of revenue are from cream, hogs, beef and wheat.
Six to ten and occasionally twenty cows are milked, on a farm. The cream is hauled to Mannville or Vermilion creameries. One to two dozen hogs are raised by each settler. A rancher in, the northeast corner of the township has about 250 head of Hereford cattle. On this ranch, which contains six sections, about sixteen cows axe milked and the cream shipped to Vermilion creamery.

HAY AND WINTER FEED
A very limited supply of hay is cut on the uplands and the few low meadows. The principal winter feed for stock is oat hay, rye hay, oat straw and sunflowers. The dairymen have trench silos, into which the sunflowers are packed, after they have been cut up.

FUEL
For fuel practically all the settlers use lignite coal, which is shipped in from Edmonton, and costs them from $6 to $8 per ton at Mannville, Claysmore or Vermilion.

WATER
There is a large fresh water lake in the northwest corner of the township. Grizzly Bear creek, a stream 6 feet wide and 1 foot deep, flows out of this lake in an easterly direction. These together with a number of small ponds and sloughs supply sufficient water for range stock. The settlers draw an abundant supply of fresh, cold water from wells which are from thirty to one hundred feet deep.

POST OFFICES AND SCHOOLS
The settlers get their mail either at Mulga, a post office in section 13-49-8, or at Vermilion.
There is a school in the northwest quarter of section 12 and one in the southwest of 13-49-8. These schools although somewhat far apart meet fairly well, the educational requirements of the community.

GENERAL
This township is more suitable for ranching or for dairying than for the raising of grain. As the country is rough and hilly it is not probable that it will ever be very thickly settled.