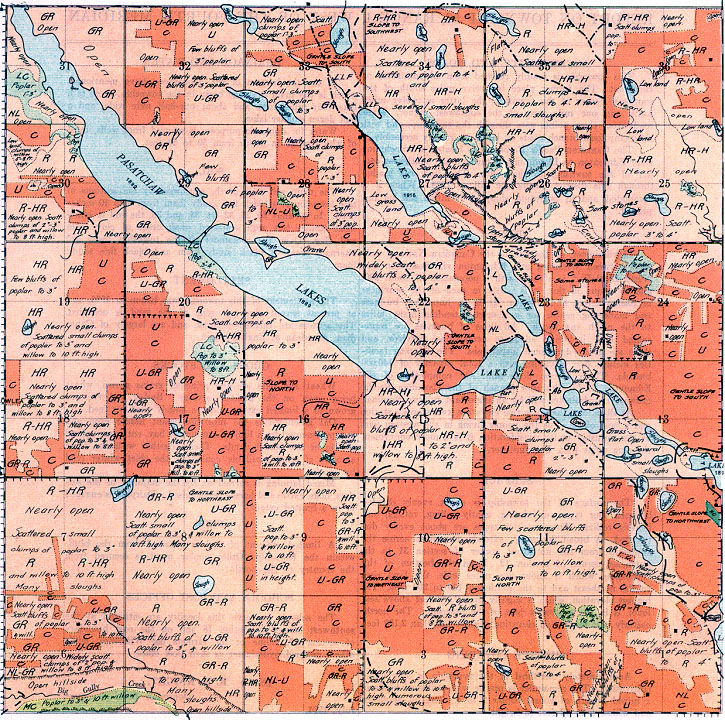 REPORT ON TOWNSHIP 52, RANGE 1, WEST OF THE FOURTH MERIDIAN

ACCESSIBILITY AND ROADS .
This township is readily reached from Lloydminster or Blackfoot. The former place is twelve miles south of the southeast comer of the township, the latter is twelve miles south and one mile west of the southwest corner. Main roads from these points pass through the township, and with the many local branch roads and lands are readily accessible.
The Canadian Pacific Railway has located a branch line from Edmonton to Lloydminster, through the southwest corner of the township to the south. This line was graded through this district during the fall of 1924. When it is completed and in operation shipping facilities will be improved.

TOWN
Lloydminster, on the line of the Canadian National railways between Winnipeg and Edmonton via Saskatoon and North Battleford, is a town with a population of about 900, and is unique in that it is partly in each of the provinces of Saskatchewan and Alberta. It is an important business and marketing centre for a district extending many miles to the north and south. All lines of business are represented here including adequate professional services, ani there are good educational institutions. The shipping facilities include five elevators with a total capacity of 140,000 bushels. There is one flour mill. On completion of the Edmonton to Lloydminster branch of the Canadian Pacific railway, Lloydminster will be an important railway terminal.
At Blackfoot, there are two elevators, two stores, a station and a post office. For the people living in the western part of the township under consideration it is a more convenient shipping point than Lloydminster.

SURFACE
The Surface of the township is about evenly divided between four types, undulating, gently rolling, rolling, and heavily rolling. These various types are about evenly distributed. A broad depression extends diagonally across the township from the northwest corner of section 31 to the northeast corner of section 12. From the bottom of this depression, which is about five miles wide, the land rises: to the northeast and to the southwest 150 to 200 feet. The highest elevation, which is slightly over 2,100 feet above sea- level, is in the southwest part of the township. The northeasterly part reaches an elevation slightly less than 2,100 feet.

SURFACE COVERING
Approximately one-third of the township is now under cultivation. The remainder is prairie with scattered bluffs of a mixed growth of young poplar 2 to 4 inches in diameter. and willow 6 to 12 feet in height.

DRAINAGE AND WATER
In the bottom of the depression above mentioned, which is the main drainage basin in the township, there is a lake four miles long and about one-half nile wide, and a half dozen smaller lakes. Water for domestic purposes is secured from wells, most of which range in depth from 50 to 80 feet.

SETTLEMENT
The settlement of this township was begun in 1905, ani at present seventy-five per cent of the land is occupied. The settlers are English-speaking, and are largely of Canadian, American or English origin.

CROPS AND STOCKS
Wheat and oats are the principal grains grown, wheat being sown on the greatest acreage. Barley and rye are grown to a limited extent and are largely used for feed.
Oat greenfeed is the most important fodder crop and is supplemented by a limited amount of hay, cut from upland prairie or low slough lands. These together with the large amount of straw available constitute the chief winter feed for stock.
Mixed farming ds carried on by the majority of the settlers, hogs, cattle and horses being raised. Dairying is engaged in to a limited extent.

FUEL
A limited amount of fuel is obtained from the bluffs within the township. Other poplar wood is secured from the country to the north.

SCHOOLS AND POST OFFICES
The schools to serve this locality are situated at the southwest corner of section 18 and on the east boundary of section 27. Some of the farmers use Willowlea, while others prefer Lloydminster as their post office.