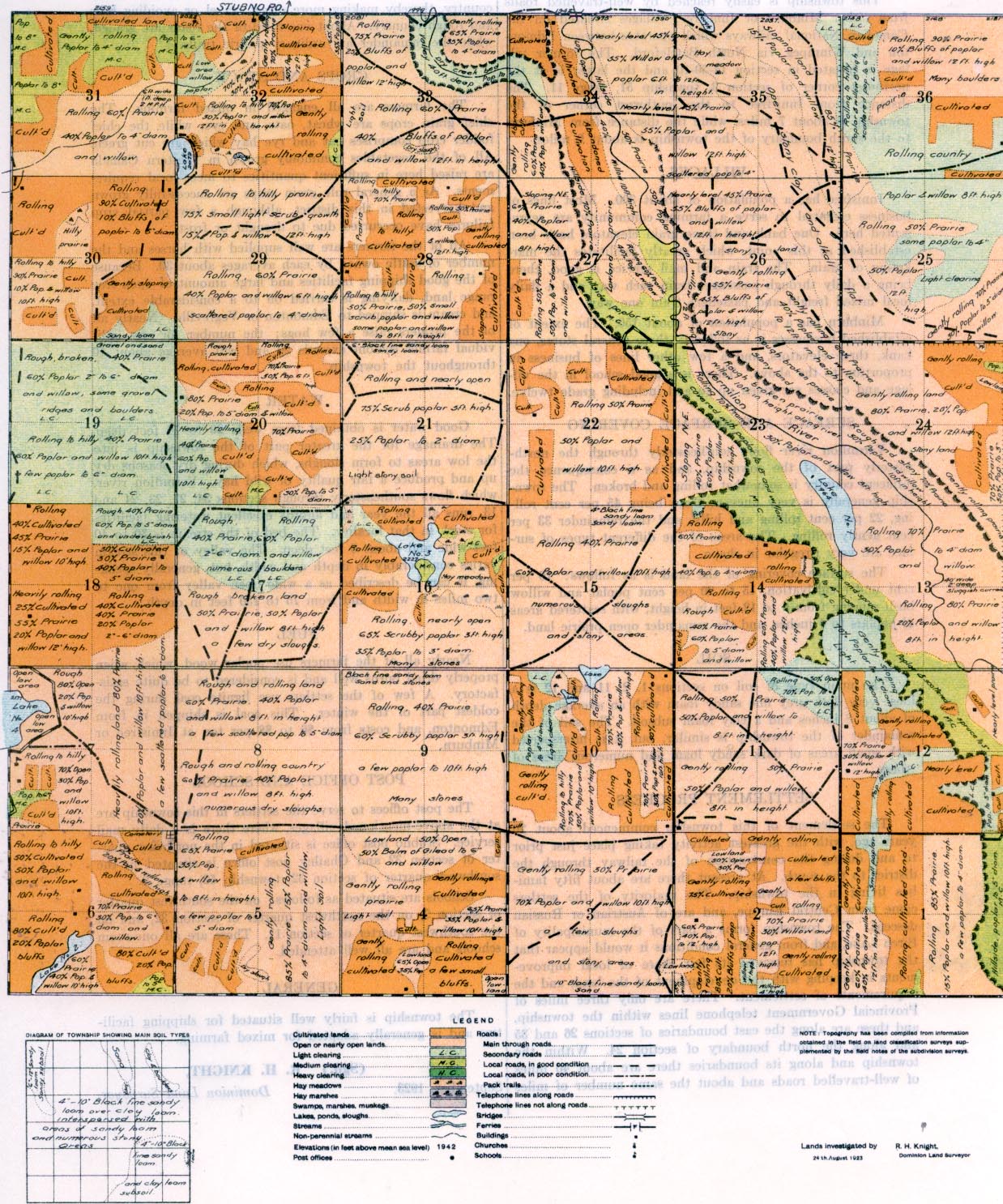 REPORT ON TOWNSHIP 52 RANGE 10, WEST OF THE FOURTH MERIDIAN

ACCESSIBILITY
This township is easily reached by well-travelled roads from either Minburn or Innisfree, villages situated on the Canadian National railways which operates between Edmonton and Winnipeg via North Battleford. The former village is situated in section 14-50-10 and the latter is at the northeast corner of section 3, township 51, range 11. The distance from Innisfree to the southwest corner of the township is about 7 miles, while the distance from Minburn to the south boundary of the township is about 9 miles.

VILLAGES
Innisfree has a population of about 300. Most lines of business essential to serve a farming community are represented here. One bank and three grain elevators have been established at this point, which greatly facilitates the marketing of grain. The train and mail service is good, there being a daily through passenger train each way and a daily local mixed freight and passenger train one way.
Minburn has a population of about 150. The extent of established businesses is as follows: three general stores, one bank, three elevators, and a few other lines of business in proportion to the above. There is a good school in the village and classes are given up to and including grade twelve.

SURFACE AND SURFACE COVERING Vermilion river flows southeasterly through the north easterly part of the township, and as a consequence the adjacent country is somewhat rolling and broken. The township generally is very uneven, there being 45 per cent rolling, 22 per cent rolling and hilly, and the remainder 33 per cent gently rolling. The areas of the different types of surface are very irregular in shape.
The surface covering of the land is as follows: 16 per cent under cultivation, 15 to 20 percent poplar and willow bush ranging from 6 to 12 feet in height, with scattered areas, of poplars to 4 inches, and the remainder open prairie land.

SOIL
The main type of soil on sections 1, 2, 11 and 12 is a loose very dark grey fine sandy loam with an average depth of about 8 inches and a clay loam subsoil. The soil of the remainder of the township is similar, but it is interspersed with small areas of dark sandy loam and numerous areas of stones.

SETTLEMENT PROGRESS
The settlement of this township commenced about 20 years ago, with the greatest activity taking place just prior to and during the construction of the railway through the district to the south. At present there are about fifty families living in the township. The majority of the settlers came from Central Europe, and are of Austrian or Russian descent. The township forms a part of the, municipality of Birch Lake, and from general conditions it would appear that the township has received its fair share of local improvements in keeping with the development of the land, and the requirements of settlement. There are only three miles of Provincial Government telephone lines within the township, and these are along the east boundaries of sections 26 and 35 and along the north boundary of section 24. Within the township and along its boundaries there are about 40 miles of well-travelled roads and about the same number of miles of slightly travelled roads. About 50 per cent of these roads are upon the regular road allowances and the rest are across country, thereby making more direct travel or avoiding hills and rough country. About one-third of the roads are graded, while the remainder are ordinary prairie trails.

CROPS AND STOCK
The farmers are all engaged in mixed farming. The chief grain crops are wheat, oats, and rye, while the chief fodder crop comprises oat and rye hay which are cut green. All of the vegetables commonly grown in Western Canada are raised here in sufficient quantities to meet local requirements. As a general rule grain crops are successfully grown and harvested in this district, although a few partial crop failures have occcurred due to drought or frost.
All of the farmers are well supplied with horses and the number of cattle owned by each averages about 30. Because of the good shipping facilities and large amount of open free range land, dairying is carried on to a considerable extent, and cream is shipped to Edmonton or Vegreville. Nearly all of the farmers raise a few hogs; the number for any individual farmer seldom exceeds 20 and will average about 10 throughout the township.

WATER
Good water is obtained from wells 20 to 70 feet deep. The drainage for the greater part of the township is into the low areas to form sloughs, which during dry seasons dry up and produce a fair quality of wild hay. Vermilion river, which flows southeasterly through sections 34, 27, 23, 24 and 13, runs all the year and affords excellent watering facilities for stock in that locality. The bed of the stream is 30 to 40 feet wide and about 6 feet deep. The valley of this stream varies considerably in depth and width, but, generally speaking, it can be described as a wide open valley from one to two miles in width and from 75 to 150 feet in depth.

FUEL
Nearly all of the farmers use poplar wood, which when properly dried burns well and is considered to be quite satisfactory. A few of the settlers use lignite coal during the coldest part of the winter. This coal is shipped in from Edmonton, and costs from $6 to $8 per ton at Innisfree or Minburn.