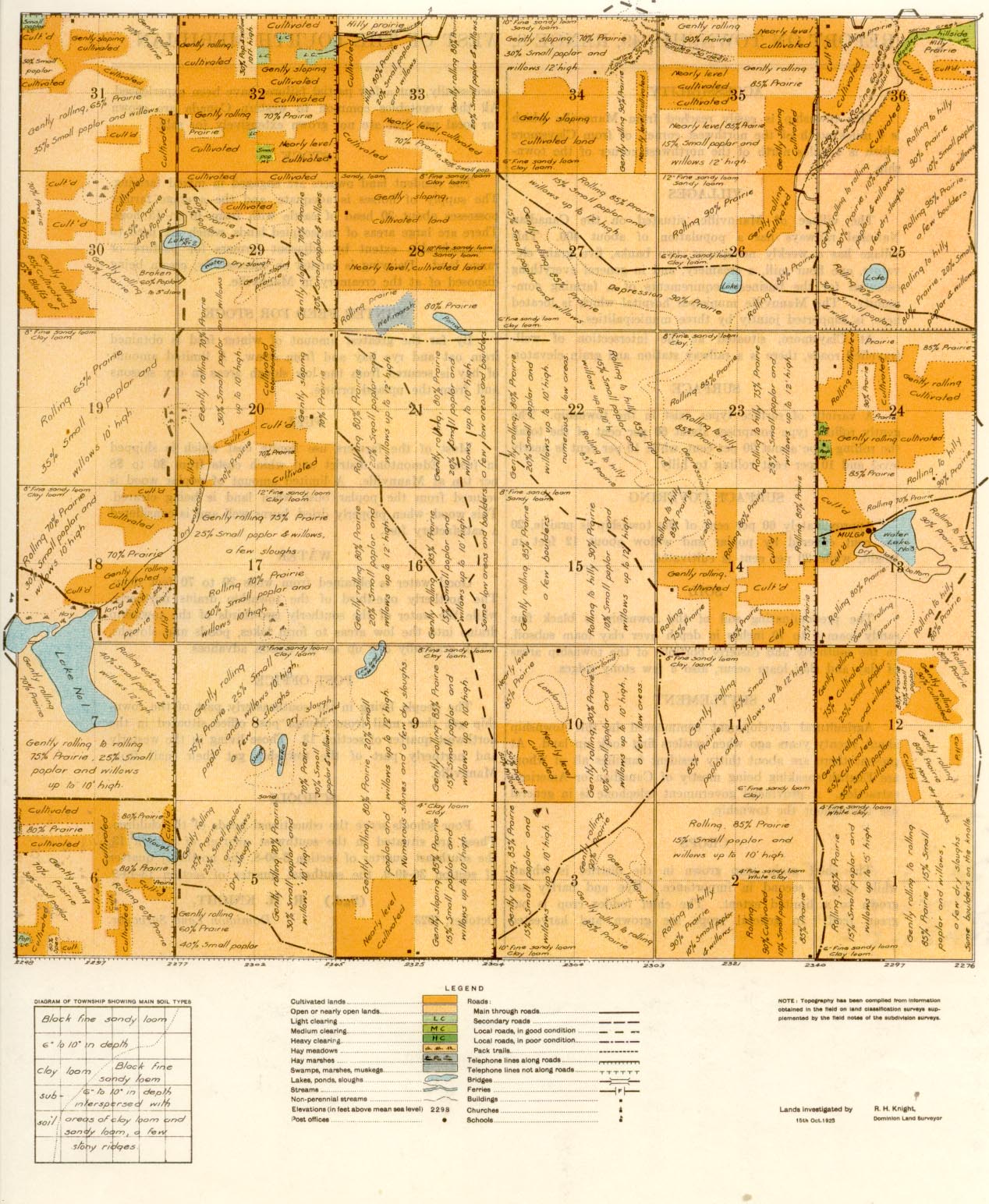 REPORT ON TOWNSHIP, 49, RANGE 8 WEST OF THE FOURTH MERIDIAN

VILLAGES
The village of Mannville, situated on the Canadian National railways has a population of about 400. This village has, a weekly newspaper, two banks, five grain elevators, one flour mill, a creamery, and in general everything essential for the business requirements of a farming community. The Mannville municipal hospital which is located here, is supported jointly by three municipalities.
At Claysmore, situated at the intersection of well-travelled roads, there is a railway station and grain elevator.

SURFACE COVERING
Approximately 60 per cent of the township is prairie, 20 per cent covered by poplar and willow about 12 feet in height, while,20 per cent is cultivated.

SOIL
The predominating soil of the township is black fine sandy loam, 6 to 10 inches in depth over clay loam subsoil. in the southerly and easterly portions of the township areas of clay and clay loam occur, also a few stony ridges.

SETTLEMENT
Agricultural development commenced in this township about twenty years
ago when settlers first took up land. At present there are about thirty resident families all of whom are English speaking being mostly of Canadian or American extraction. A provincial government telephone is in general use throughout the township.

CROPS
The chief grain crop grown in the district is wheat, while oate is second in importance. Rye and barley are grown to a limited extent. The chief fodder crop is oat green feed. In general crops are grown and harvested successfully, but a few partial failures have been experienced. All the vegetables common to western Canada are grown for local use, but are not grown extensively for sale.

STOCK
The resident land owners are engaged in mixed farming. The supply of horses is adequate, and the average farmer possesses about 30 head of cattle with from 10 to 15 hogs. There are large areas of unoccupied lands, which are used to a considerable extent by adjacent farmers for pasture or range land. Dairying is carried on successfully, cream being disposed of at the creamery in Mannville.

WINTER FEED FOR STOCK
By far the greatest amount of winter feed is obtained from oat and rye hay and from straw. A limited. amount of hay is secured from the low slough areas in dry seasons and from the upland prairie.

FUEL
Most of the farmers use lignite coal which is shipped in from Edmonton district and which costs from $6 to $8 per ton at Mannville. A limited amount of poplar wood is secured from the poplar bush when land, is being -cleared. This wood, when properly dried burns well and is considered a satisfactory fuel.

WATER
Good water is obtained from wells 20 to 70 feet deep. The northerly one-third of the township drains northerly, while the water of the southerly two-thirds of the township dra.ins into the low areas to form lakes, ponds and sloughs, which gradually dry up as the season advances.