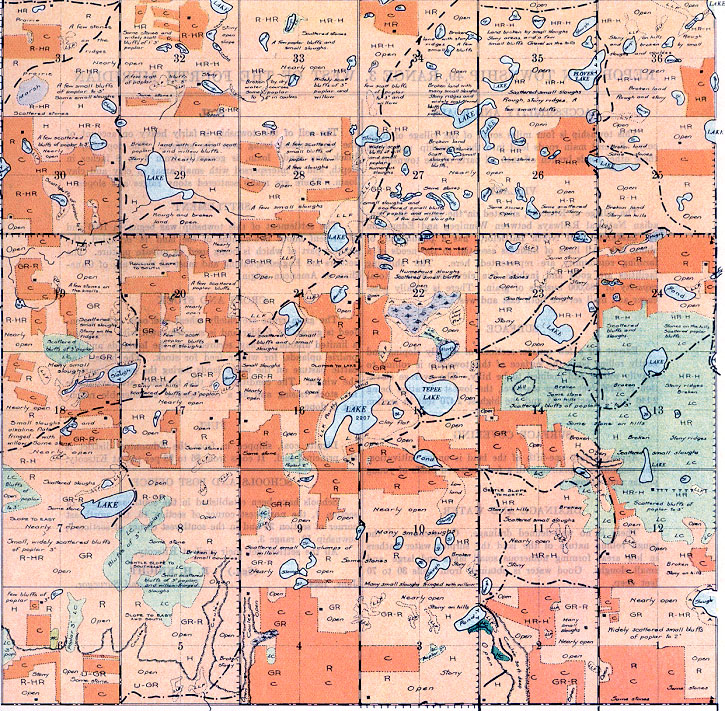 REPORT ON TOWNSHIP 49, RANGE 3, WEST OF THE FOURTH MERIDIAN

ACCESSIBILITY AND ROADS
This township is four miles south of the village of Kitscoty. Several main roads lead into the township and from these other roads branch off into all parts of the township.

VILLAGE
The village of Kitscoty, situated on the line of the Canadian National Railways between Winnipeg and Edmonton via Saskatoon and North Battleford, has a population of about 200. All lines of business essential to the needs of a farming community are represented here. The shipping facilities are good and include five elevators with a total capacity of 285,000 bushels of grain. There is a daily passenger and mail service both east and west. I

SURFACE
Except for a few quarter-sections of slightly sloping and gently rolling land, the surface of this township is rolling to heavily rolling and inclined to be hilly. The average elevation is 2,250 feet above sea-level, the lowest elevation being 2,140 feet in section 35 and the highest 2,470 feet in section 7.

SURFACE COVERING
Approximately one-fifth of the land is under cultivation. The remainder is prairie, with a few scattered bluffs of young poplar and willow.

DRAINAGE AND WATER
There is no well-defined drainage. On account of the rough rolling nature of the land the surplus water gathers in low areas forming numerous small lakes and large and small sloughs. Good water is obtained from wells 30 to 70 feet deep.

SOIL
The soil of this township is fairly heavy on account of the clay subsoil being near the surface. The top soil, of black fine sandy loam, is generally from 4 to 8 inches in depth, and is interspersed with small areas of clay and clay loam. There are many scattered stony ridges and slopes.

SETTLEMENT
The settlement of this township was begun in 1906 and at present about five-eighths of the land is occupied, the greater part of which is being used as private pasture. The settlers are English-speaking and most of them are of Canadian or American origin.

CROPS AND STOCK
The grain crops are chiefly wheat and oats. Oat green- feed is grown for fodder and is supplemented with straw and a limited amount of hay, secured from the lowlands and the prairie uplands, for winter feed for stock. The horses and cattle pasture on the range lands during the greater part of the winter. The conditions in this township are favourable for stock raising and as a consequence considerable ranching is done.

FUEL
Lignite coal, shipped in from the Edmonton district is the principal fuel. It costs from $6 to $8 per ton at Kitscoty.