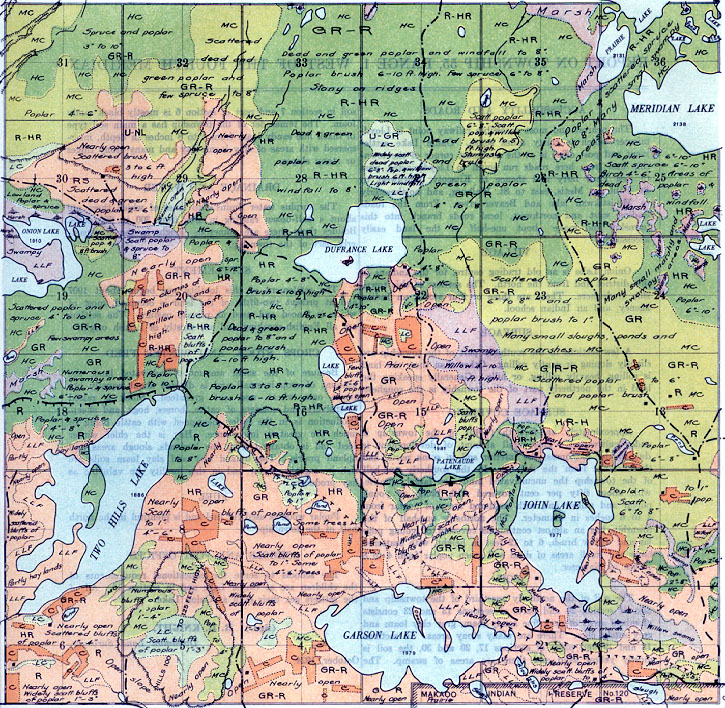 REPORT ON TOWNSHIP 55, RANGE 1, WEST OF THE FOURTH MERIDIAN

ACCESSABILITY AND ROADS
The nearest and most accessible railway point is Lloydminster which is thirty miles south. Onion Lake settlement and post office is at the southeast comer of the township and from here roads run south to Lloydminster, west to Lea Park ferry and thence to Kitscoty, northwest to St. Paul des Metis, east to St. Walburg, and northeasterly to Ministikwan lake and Beaver river. From the roads leading west and northwest, local roads branch into this township and make about one-half of the land easily accessible.

VILLAGE
Onion Lake is an old trading centre, for the Indians in this district and from the north. The settlers of this township trade here. There are three or four stores, an Indian agency, and an Indian school.

SURFACE COVERING
Approximately one-fortieth (1/40) of the township is under cultivation. This small amount of development is due to the roughness, the inferior soil in some parts, and the distance from the railway. In the southerly one-half of the township the uncultivated lauds are largely prairie, with about fifty per cent covered with bluffs of young poplar and willow and with scattered areas of poplar from 3 to 6 inches in diameter. The northerly one-half of
the township has an almost continuous covering of young poplar and willow brush, 6 to 12 feet in height, with scattered large and small areas of dead and green poplar from 4 to 8 inches in diameter.

SOIL
The soil of the northerly one-third of the township and also of section 24 and parts of sections 13 and 23 consists of mixed areas of grey fine sandy loam, grey clay loam and grey sandy clay. There are many stony areas. In sections 18 and 19 and parts of sections 17, 20 and 30, the soil mostly yellow sand and there are areas of swamp. The soil in section 7 and part of section 6 is mostly black sandy loam. The remainder of the township has a main soil type of black fine sandy loam from 4 to 8 inches in depth, interspersed with areas of clay loam, clay and many stony ridges or stony slopes.

DRAINAGE AND WATER
The surplus water drains into lakes of which there are about a half-dozen ranging in area from 300 to 600 acres. Besides these there are numerous sloughs in the northeasterly part of the township.

SETTLEMENT
The settlement of this locality was begun about 1907 and at present two-fifths of the land is occupied, most of which is fenced and used as private pasture. The settlers are all English-speaking and are mostly of British origin.

CROPS, STOCK, AND WINTER FEED
Because of the small amount of cultivated land, the amount of crop is small and is divided about equally between oats, wheat and oat greenfeed. Stock is raised extensively and consists of cattle, horses, hogs, and sheep. Production is in the order mentioned with cattle being of much the greatest importance. Hay is the chief winter feed and is obtained from the lowlands, slough areas and upland prairie. The upland clay and clay loam soils are rich in organic matter and in this locality are valuable as hay producers.

FUEL
Poplar wood is used for fuel and is plentiful in the north half of the township.

SCHOOLS AND POST OFFICES
The schools to serve the educational requirements of the children are at Onion Lake and in section 10. All of the settlers get their mail at Onion Lake.