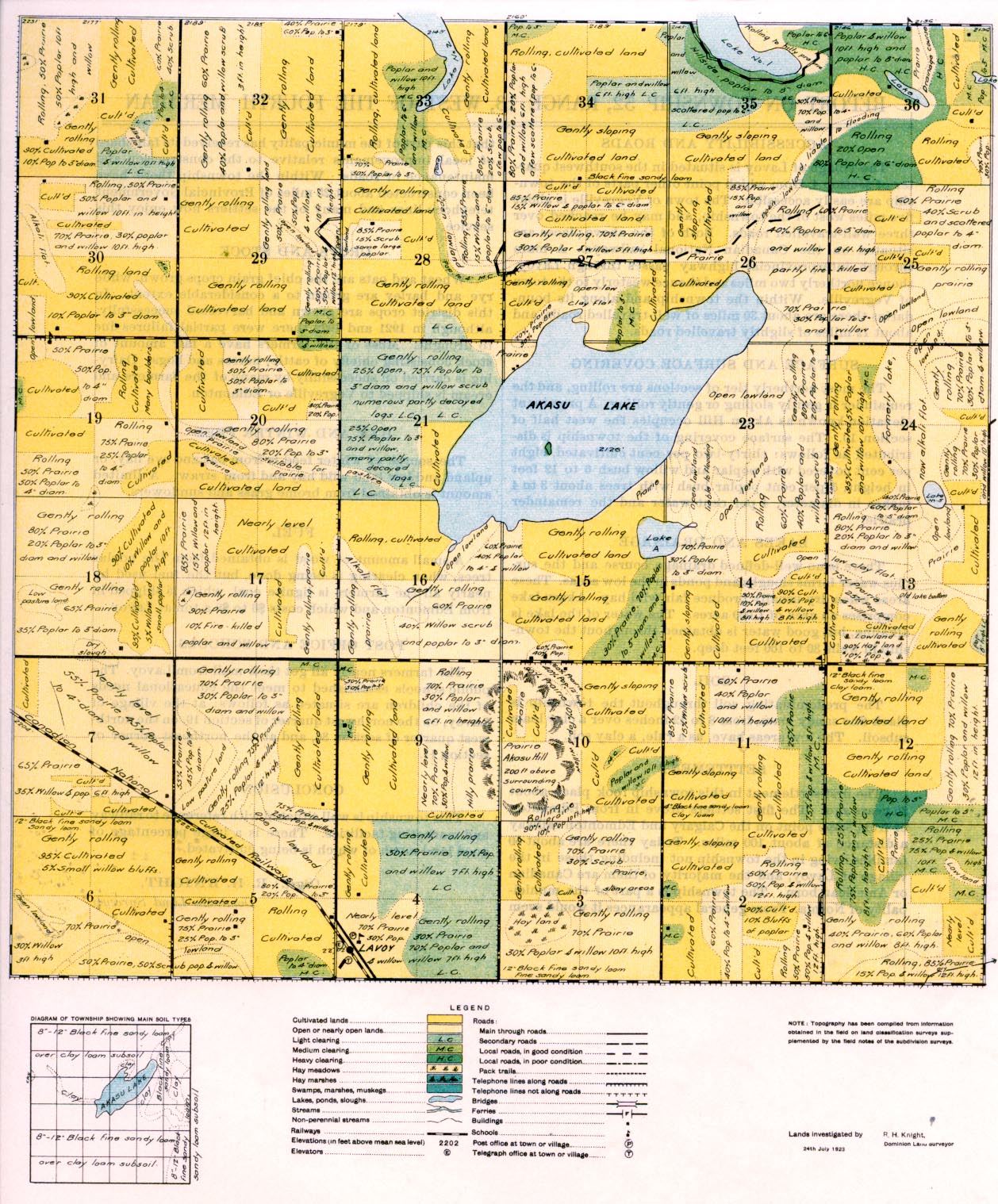 REPORT ON TOWNSHIP 52, RANGE 13, WEST OF THE FOURTH MERIDIAN

The village of Lavoy is situated in the southwest quar­ter of section 4, from which point other parts of the town­ship are easily accessible. The town of Vegreville is about five miles west of the township, and may be reached over three well-travelled roads. Both of the above places are situated on the Canadian National railways. A main through interprovincial highway passes through Lavoy, thence northerly two miles and thence westerly to the town of Vegreville. Within the township and along its boun­daries there are about 30 miles of well-travelled roads, and about 12 miles of slightly travelled roads.

The most northerly tier of sections are rolling, and the remainder is gently sloping or gently rolling. A prominent elevation known as Akasu Hill occupies the west half of section 10. The surface covering of the township is dis­tributed as follows: thirty-two per cent cultivated, eight per cent covered with poplar and willow bush 6 to 12 feet in height, 5 per cent poplar bush with trees about 3 to 4 inches in diameter, 4 per cent water and the remainder prairie.

There is no well-defined drainage course and the sur­plus water forms sloughs and ponds in the low areas. These areas when dry usually produce fair wild hay. Akasu lake comprises an area of 1,000 acres. The water of the lake is alkaline, but good water is obtained throughout the town­ship in wells 30 to 100 feet deep.

The predominating soil throughout the township is black fine sandy loam, from 8 to 12 inches over a clay loam subsoil. The low areas have, as a rule, a clay soil.

The first settlement in this township took place about 20 years ago. The first settlers drove in from Edmonton or from some point on the Calgary and Edmonton railway a distance of about 100 miles. Today there are about 50 families living in the township not including those in the village of Lavoy, and the majority of them are Canadian or American born. The township is a part of the munici­pality of Norma. From general appearances it would seem that this part of the municipality has received its fair share of local improvements relative to the construction and maintenance of roads. Within the township there have been constructed about 25 miles of Provincial Government telephone lines and many of the settlers now enjoy this service.

Wheat and oats are the chief grain crops grown, while rye and barley are grown to a considerable extent. In this district crops are grown and harvested successfully, although in 1921 and 1922 there were partial failures due to drought. Most of the farmers have a fair amount of stock consisting chiefly of cattle, horses and hogs. Dairy­ing is carried on successfully by many of the farmers and cream is shipped to Vegreville or Edmonton.

The source of winter feed is from oat and rye hay, or upland and low land wild hay and from straw. A limited amount is obtained from brome grass and sunflowers.

A small amount of wood is obtained from the poplar trees, when clearing is being done, but the fuel used by nearly all the farmers is lignite coal, which is shipped in from Edmonton and which costs $6 to $8 a ton at Lavoy.

This township is well situated with reference to railway and marketing facilities. There is a large percentage of good land much of which is being cultivated.