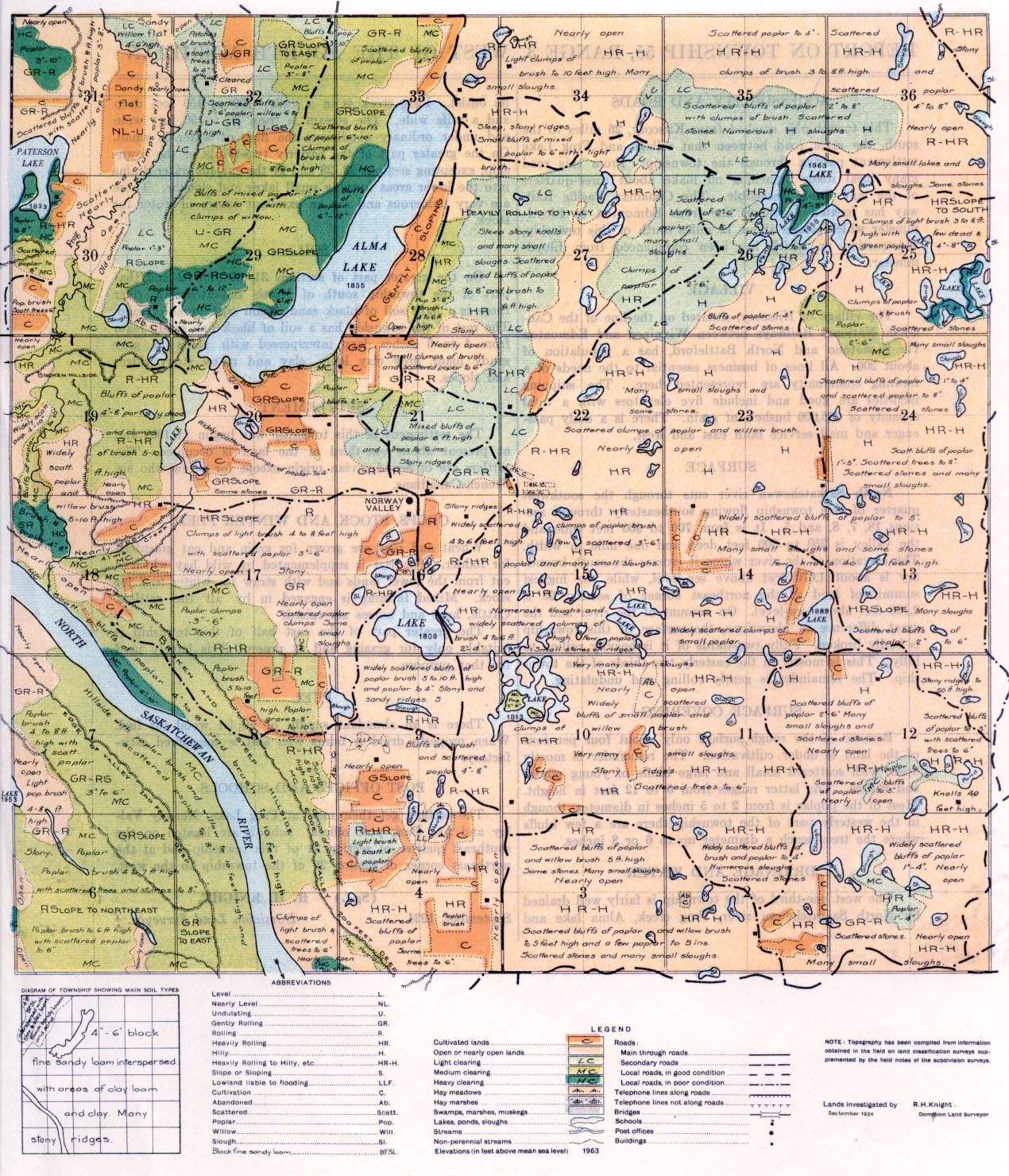 REPORT ON TOWNSHIP 55, RANGE 3, WEST OF THE FOURTH MERIDIAN

ACCESSIBILITY AND ROADS
This township is reached from Kitscoty, 26 miles to the south, the main road between that village and Frog Lake settlement passing through the township. From this road many local roads branching off make about three-quarters of the land easily accessible. The Canadian Pacific Railway has located a branch line from Edmonton to Lloydminster which passes about 12 miles south of this township, construction on which has been commenced from Lloydminster.

VILLAGE
The village of Kitscoty, situated on the line of the Canadian National Railways between Winnipeg and Edmonton via Saskatoon and North Battleford, has a population of about 200. All lines of business essential to the needs of a farming community are represented here. The shipping facilities are good and include five elevators with a total capacity of 285,000 bushels of grain. There is a daily passenger and mail service both east and west.

SURFACE
North Saskatchewan river cuts through the southwest quarter of this township flowing southeasterly through sections 18, 7, 8, and 5. It is from 700 to 900 feet wide and the valley is 250 to 300 feet deep and one mile in width. The elevation of the river where it crosses the south boundary is about 1,670 feet above sea-level, while the highest summit of land at the northeast comer of section 23 is 2,100 feet above sea-level. On account of the river and the great difference of elevations, the surface of this township is badly broken. Fully two-thirds of it is heavily rolling to hilly. This is mostly in the easterly two-thirds of the township. The remainder is gently rolling and undulating.

SURFACE COVERING
Because of the rough surface only about four per cent of the land is under cultivation. The remainder is mostly open, with scattered small and large bluffs of young poplar and willow. The latter ranges from 6 to 12 feet in height. Most of the poplar is from 2 to 5 inches in diameter, though in the westerly part of the township there are a few bluffs where the trees reach a diameter up to 6 or 8 inches.

DRAINAGE AND WATER
The west one-third of the township is fairly well drained by North Saskatchewan river, Frog creek, Alma lake and its outlet. Frog creek is in a valley 100 to 150 feet deep and a mile wide. The stream is from 30 to 50 feet wide and under ordinary conditions the
flow of water is small. On the greater part of the easterly two-thirds of the township, excepting sections 33, 28 and 21 the surplus water drains into the lower areas forming small lakes and sloughs. These are very numerous and are an excellent source of water for stock.

SETTLEMENT
The settlement of this township was begun in 1909 and at present about one-third of the land is occupied. The settlers are of Scandinavian origin except for a few who are French-Canadians.

CROPS, STOCK AND WINTER FEED
Wheat and oats are grown for grain and oat greenfeed for fodder. The last is supplemented by wild hay which is cut from the lower lands and with straw for winter feed for stock. Mixed farming is engaged in by all the settlers. Cattle, hogs and horses are raised.
The greater part of the east half of this township is suitable only for grazing and at present it is largely used for that purpose.

FUEL
There is an abundant supply of poplar wood for fuel. When properly dried it burns well and is considered satisfactory.

POST OFFICES AND SCHOOLS
The settlers get their mail at Frog Lake, Norway Valley and Lea Park post offices. Schools are located on the southeast quarter of section 21 of this township and at the northeast corner of section 26 of the township to the west.