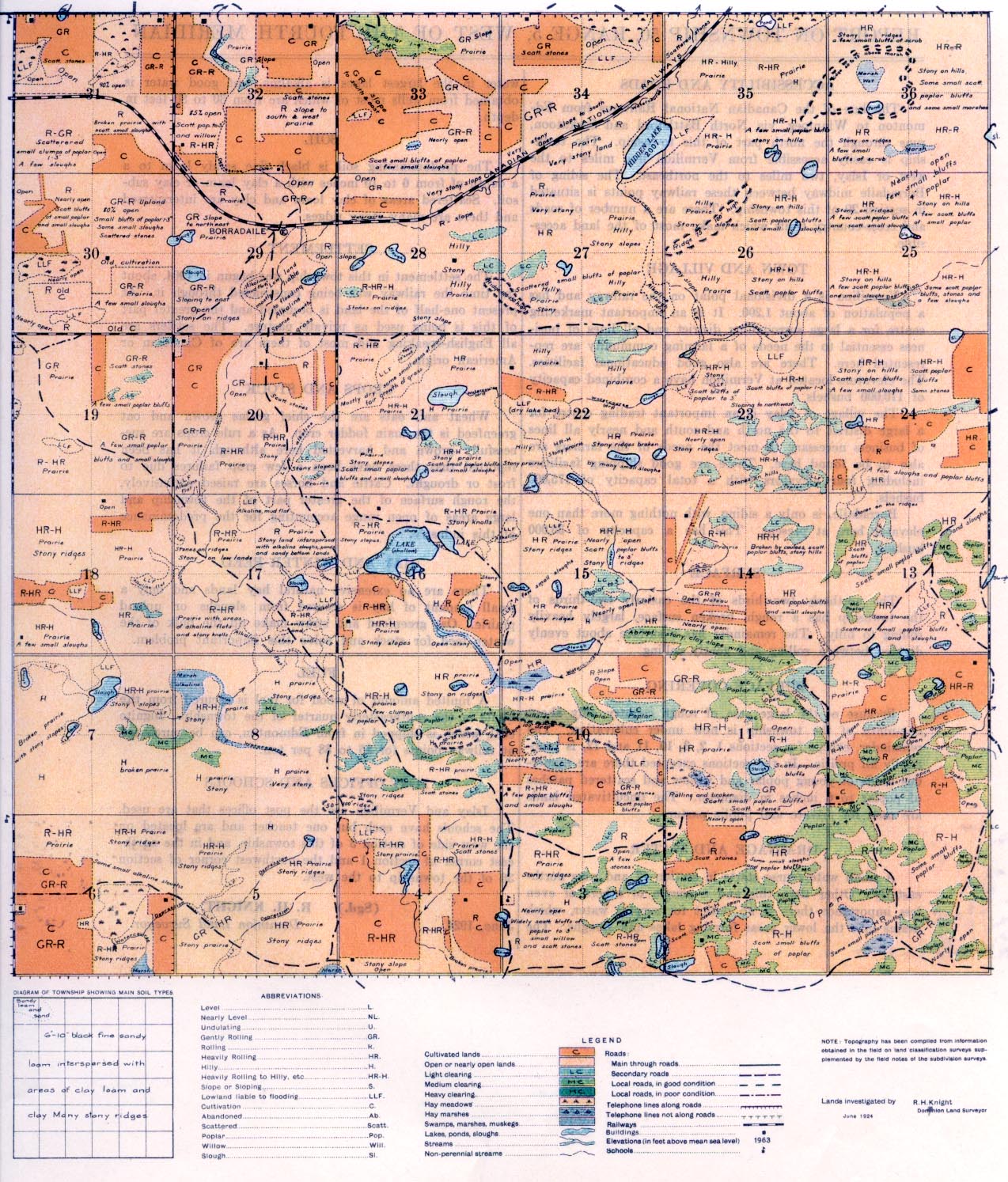 REPORT ON TOWNSHIP 50, RANGE 5, WEST OF THE FOURTH MERIDIAN

ACCESSIBILITY AND ROADS
The line of the Canadian National Railways from Edmonton to Winnipeg, via North Battleford and Saskatoon, runs through the north part of this township. The township is easily accessible from Vermilion five miles to the west or Islay, two miles to the northeast. The siding of Borradaile midway between these railway points is situated in section 29 of this township. There are a number of roads and cross-country trails which make most of the land accessible.

TOWN AND VILLAGE
Vermilion is a divisional point on the railway and has a population of about 1,200. It is an important marketing centre for a large surrounding district and all lines of business essential to the needs of a farming community are represented here. There are also good educational facilities. The elevators located at Vermilion have a combined capacity of 110,000 bushels.
The village of Islay is an important trading centre for a large district to the north and south and nearly all lines of business necessary to meet the needs of the farmers are also to be found here. There are good shipping facilities including four elevators with a total capacity of 175,000 bushels.
Borradaile, is only a siding, with nothing more than one elevator here at present. This has a capacity of 35,000 bushels.

SURFACE COVERING
Because of the large area of rough country only about one-ninth of the township is now under cultivation. The remainder, except for sections 1, 2, 3, 10, 11 and 12, is practically all prairie. In the sections excepted there are numerous bluffs of young poplar and willow and scattered patches of poplar to 6 inches in diameter. The uncultivated lands are used for private and public pasture.

DRAINAGE AND WATER
A small watercourse starts in section 17 and runs northeasterly. Other than this and a couple of others of even less importance there is no outlet for surplus water, which drains into the lower areas forming lakes and sloughs. The water in the largest lakes is alkaline, but good water is obtained from wells most of which are from 30 to 80 feet in depth. I

SOIL
The predominating soil is black fine sandy loam to a depth of from 6 to 10 inches with a clay loam or clay subsoil. Scattered areas of clay loam and clay are interspersed and there are many stony ridges.

SETTLEMENT
The settlement in this township was begun in 1904, about the time the railway was being constructed through it. At present one-half of the land is occupied and the greater part of this is being used as private pasture. The settlers are all English-speaking and most of them are of Canadian or American origin.

CROPS AND STOCK
Wheat and oats are the chief grains grown and oat greenfeed is the main fodder crop. As a rule crops are successfully grown and harvested here although it has been reported that there have been a few crop failures due to frost or drought. Cattle and horses are raised extensively, the rough surface of the greater part of the township and large areas of open range accounting for the predominance of this industry.

HAY AND WINTER FEED
There are no extensive natural hay lands and only a small amount of hay is secured from sloughs or upland prairie. Oat greenfeed and straw make up the bulk of the winter feed for stock and solve this important problem.

FUEL
A limited amount of wood for fuel is secured from the bluffs in the southeasterly quarter of the township. Lignite coal, which is shipped in from Edmonton, can be purchased at railway points for $6 to 68 per ton.