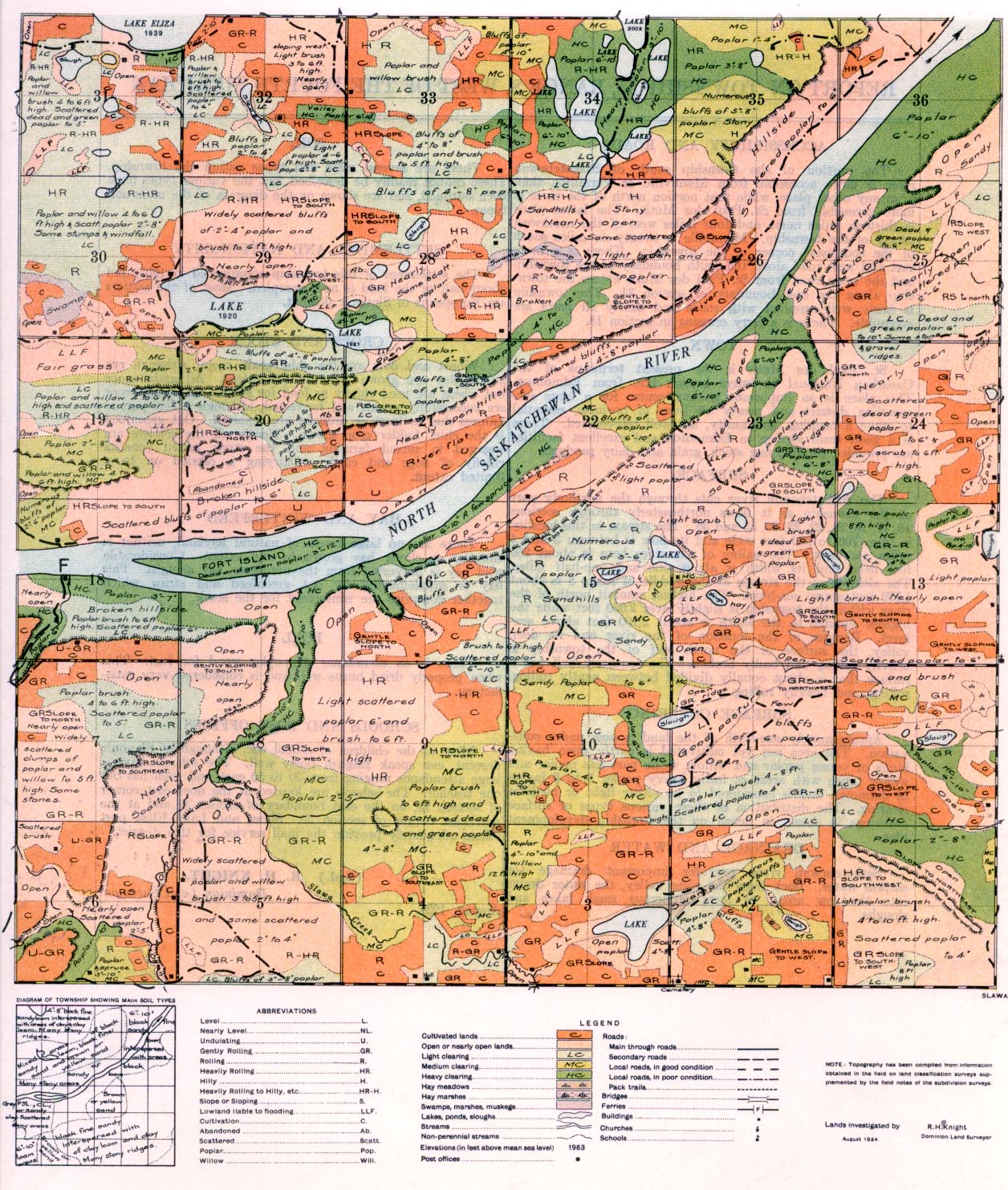 REPORT ON TOWNSHIP 55, RANGE 8, WEST OF THE FOURTH MERIDIAN

TOWN
St. Paul des Metis is the present terminus of the Canaidian National Railways branch. line from Edmonton. This place is an important trading centre for a large surrounding district and nearly all lines of business, essential to serve a farming community, are well represented. There is a good train service to Edmonton and excellent facilities are provided for shipping stock, grain and dairy products.

SURFACE
The Saskatchewan river cuts through the northerly part of the township as it flows northeasterly through sections 18, 17, 16, 21, 22, 23, 26, 35 and 36. The stream in this locality is from 700 to 900 feet wide and its flow is between 3 and 4 miles per hour. The valley of the river here ds about 250 feet deep and its width is about one and one-half miles. The al-titude of the stream at the middle of range 8 is about 1,730 feet above sea-level. The highest summit north of the river within the township is slightly over 2,050 feet while the highest sumrn6t to the south is about 2,100 feet above sea- level. Because of the location of the river and its deep valley, the surface of the north half of the township is heavily rolling and badly broken. The southerly half has a surface that is about equally divided between gently rolling, rolling, and heavily rolling.

SURFACE COVERING
Approximately one-sixth of the land is now under cultivation. The area not yet cultivated is partly open having bluffs of young poplar and willow, while part has poplar und willow brush with areas of fairly heavy poplar 3 to 6 inches in diameter, and is considered to be either light or medium clearing. The distribution of these various types of surface coverings is shown in detail on the township development plan.

DRAINAGE AND WATER
Saskatchewan river provides important drainage for surplus water. Back from the river valley, the water drains into the tow areas, to form numerous small lakes and sloughs.

SOIL
There are several main soil types within the township. These cannot readily be described, but the various types have been outlined, and axe shown on the diagram of the main soil types.

SETTLEMENT AND NATIONALITY
The settlement of this township commenced in 1907, and about half of the land is now occupied. Most of the settlers are Europeans of Slavonic descent.

CROPS AND STOCK
Wheat and oats are the chief grain crops, although rye And barley axe grown to a limited extent. All grain crops but wheat are used chiefly as feed for stock. As a rule crops axe successfully grown and harvested, though a few partial failures due to frost or drought are reported. Oat greenfeed is the chief fodder crop grown. Nearly all the settlers are engaged -in mixed farming and the stock raised consists chiefly of hogs and cattle. Dairying is carried on to a limited extent.

HAY AND WINTERFEED
There are no large tracts of natural hayland, neither is timothy or clover hay grown to any extent. Considerable wild hay is harvested from the numerous hay sloughs. This hay is supplemented by oat greenfeed and straw which together comprise the winterfeed for the stock.

FUEL
There is an abundance of poplar wood for fuel. This when properly dried burns well and is considered very satisfactory.

SCHOOLS AND POST OFFICES
Most of the. children of school age, although of Slavonic descent, can speak English fairly well. The schools have a large attendance ranging from 30 to 50 each and each has but one teacher. The schools are located at the northeast comer of section 13, on the cast boundary of section 6, and at the northeast comer of section 32. Slawta and Lake Eliza post offices adequately provide the mail service for this district.