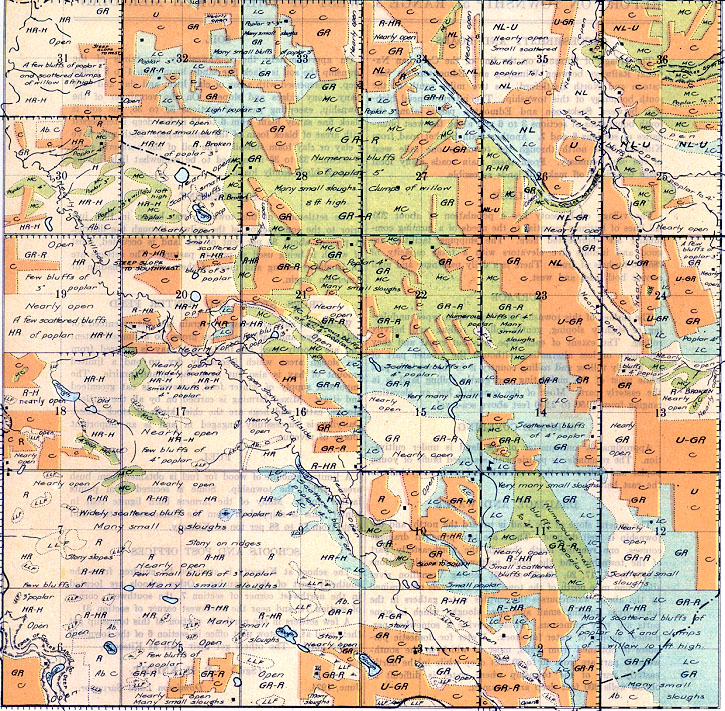 REPORT ON TOWNSHIP 51, RANGE 3, WEST OF THE FOURTH MERIDIAN

ACCESSABILITY AND ROADS
The village of Kitscoty on the line of the Canadian National Railways between Winnipeg and Edmonton via Saskatoon and North Battleford, lies two miles south of the south boundary of this township. The interprovincial highway between Saskatoon and Edmonton passes along the south boundaries of sections 3 to 6 and along the west boundaries of sections 6 and 7. Another main market road from Kitscoty leads north through the township one mile west of the east boundary. From these main roads many local roads branching off make all lands accessible,

VILLAGE
The village of Kitscoty has a population of about 200. All lines of business essential to the needs of a farming community are represented here. The shipping facilities are good and include five elevators with a total capacity of 285,000 bushels of grain. There is a daily passenger and mail service both east and west.

SURFACE
The surface of this township is of four main types, undulating or slightly sloping, gently rolling, rolling and heavily rolling. The extent of each type is about equal and they are more or less alternating, although the greater part of the heavily rolling and rolling country is in the westerly part while most of the undulating and gently rolling land is in the easterly part. Most of the township has an elevation ranging from 2,150 to 2,250 feet above sea-level.

SURFACE COVERING
Approximately one-quarter of the land is under cultivation. The remainder is prairie with scattered bluffs of young poplar and willow in the west half and numerous bluffs in the east half.

DRAINAGE AND WATER
The general slope of the land is toward the north, and the township is well drained. There are two principal drainage courses, one running north through the northeasterly part of the township and the other northwest through sections 3, 10, 9, 16, 17, 20, 19, 30 and 31 joining Vermilion river about one mile north of the township. On lands not drained by the above watercourses the surplus water gathers in the lower areas forming small and large sloughs, which in some. parts are very numerous. These provide a somewhat permanent supply of water for stock. Water for domestic purposes is obtained from wells, most of which in the south-westerly part are from 40 to 80 feet deep while in the north-easterly part of the township where water is difficult to obtain wells 200 feet deep are common.

SETTLEMENT
The settlement of this township was begun in 1903 just prior to the construction of the railway through the district. At present about 85 per cent of the land is occupied, most of which is being used as private pasture. The settlers are all English-speaking and most of them are of Canadian or American origin.

CROPS, STOCK AND WINTER FEED
Wheat and oats. are grown for grain and oat greenfeed for fodder. Rye and barley are also grown to a limited extent and are mostly used for feed. Wild hay is secured from the slough areas which frequently dry up and a limited amount of hay is also cut from. the upland prairie. The important supply of winter feed, however, is oat greenfeed and straw. Mixed farming is carried on by all the settlers. Horses, cattle and hogs are the chief kinds of stock raised. Dairying is successfully engaged in and is an important source of revenue.

FUEL
A limited amount of wood for fuel is obtained from bush areas within the township. Some is secured from points farther north. Many of the farmers burn lignite coal in winter; this is shipped in from the Edmonton district and costs from $6 to $8 per ton at Kitscoty.