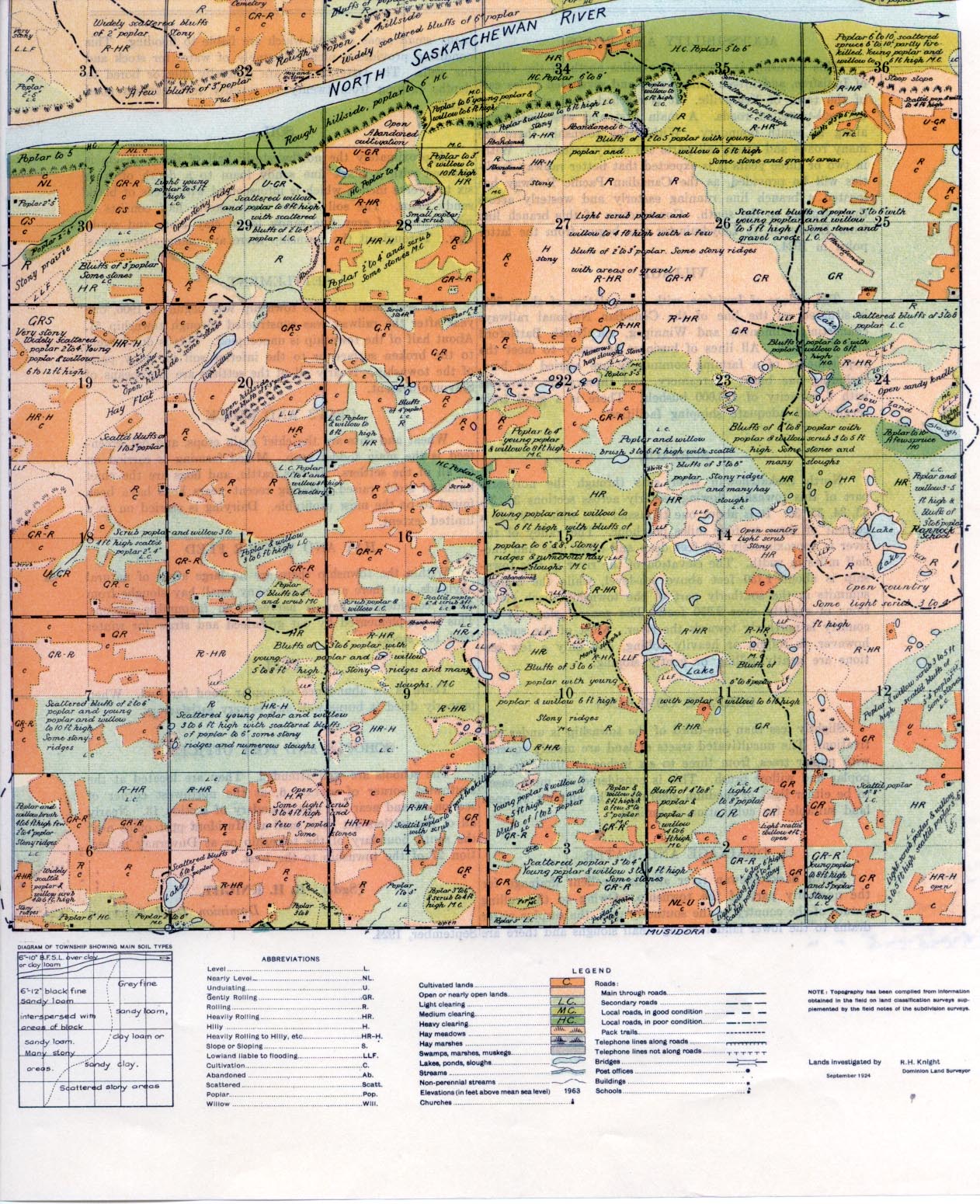 REPORT ON TOWNSHIP 55, RANGE 11, WEST OF THE FOURTH MERIDIAN

This township is twenty-three miles north of the village of Innisfree, and fifteen miles north and seventeen miles east of the town of Vegreville. It is reached from either point by well-travelled roads. A main east and west road runs along its south boundary. Within the township there are many roads and nearly all parts are easily accessible. With­in two or three years it is expected that better railway facili­ties will be provided, as the Canadian Pacific Railway has located a branch line running easterly and westerly across the township to the south. Construction of this branch line from Edmonton to Lloydminster was begun from the latter point in 1924.

Approximately the northwesterly half of the township is covered with a black fine sandy loam to a depth of from six to twelve inches, which is interspersed with areas of black sandy loam. The soil of the southeasterly half consists of mixed areas of grey fine sandy loam, clay loam and sandy clay. Throughout the township there are many stony areas.

The village of Innisfree, with a population of about 300, is situated on the line of the Canadian National railways connecting Edmonton and Winnipeg, via North Battleford and Saskatoon. All lines of business necessary to meet the requirements of a farming community are carried on here, including one bank, a creamery, and three grain elevators with a capacity of 125,000 bushels. There is a good train service and adequate shipping facilities.

The settlement of this township was begun in 1906, one year after the railway was constructed through township 51. About half of the township is unoccupied. This is due largely to the broken surface or to the inferior soil in many parts of the township. Nearly all of the settlers are Europeans of Slavonic descent.

North Saskatchewan River cuts through the northerly part of this township flowing easterly across sections 31, 32, 33, 34, 35, 36. It is about one thousand feet wide and has a current of three to four miles per hour. The valley of the river is approximately 300 feet deep and about one and one- half miles in width. The elevation of the river in this town­ship is about 1,750 feet above sea-level, while the highest summits in the southerly part of the township reach eleva­tions of slightly over 2,250 feet. The general slope of the country is northerly towards the river. Most of the surface, however, is rolling or heavily rolling, and only a few sec­tions are gently rolling or gently sloping.

Within the township there are no large areas of natural haylands, but there are a great many small hay sloughs from which considerable hay is harvested in favourable seasons. This is supplemented by oat greenfeed and straw for winter feed for stock.

There is an abundance of poplar wood for fuel. When properly dried it burns well and is very satisfactory.

Slightly less than one-third of the township is under cul­tivation. The uncultivated tracts of land are mostly covered with poplar trees, from three to six inches in diameter, and poplar and willow brush. This is considered, in most cases, to be either light or medium clearing. The amount of open land suitable for cultivation is limited.

North Saskatchewan river affords excellent drainage for the northerly part of the township. Owing to the rolling nature of the country in the southerly part, the surplus water drains to the lower land forming small sloughs and there are . many small areas of land which are liable to flooding. This condition provides a plentiful supply of water for stock and for wells. The latter, which are generally dug or bored to depths ranging from twenty to seventy feet, contain good water.