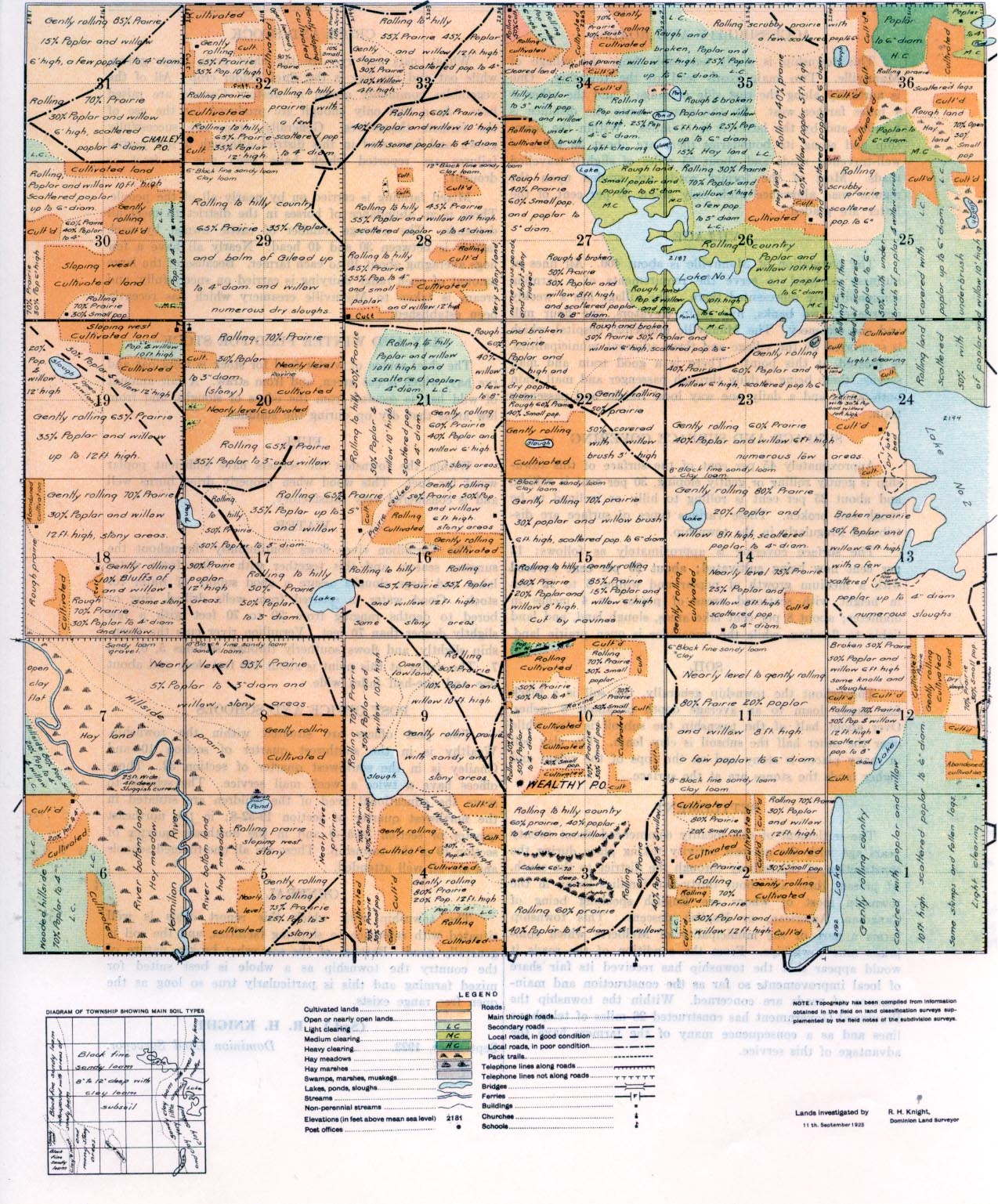 REPORT ON TOWNSHIP 52, RANGE 9, WEST OF THE FOURTH MERIDIAN

ACCESSIBILITY AND ROADS
This township is easily accessible from the village of Mannville. Two main roads lead to the township. One is northerly along the east, side of range 9 and the other is 4 miles farther west. By the former route the distance is 8 miles and by the latter it is 11 miles. Within the town- ship and along its boundaries there are about 30 miles of well-travelled roads and about 25 miles of slightly-travelled roads. Most of the former roads are graded upon the regular road allowance while only about 50 per cent of the latter are graded.

VILLAGE
The population of Mannville is about 400. All lines of business essential to serve the requirements of a farming community are represented there. The village has a weekly newspaper, two banks, five grain elevators, one flour mill and one creamery. The Mannville municipal hospital, which is supported by the village and three adjacent municipalities. is located at this point. There is a good train and mail service, there being a daily through passenger and Mail train both ways, and a daily one way local freight and passenger train.

SURFACE AND SURFACE COVERING
Approximately 45 per cent of the surface of this township is gently rolling or gently sloping, 30 per cent is rolling, and about 25 per cent is rolling to hilly or inclined to be rough and broken. These various types of surface are distributed irregularly in the township.
The surface covering is approximately as follows: 13 per cent now being cultivated; about 20 per cent. covered with a medium growth of poplar and willow 6 to 12 feet in height with scattered areas of
poplar to 4 inches in diameter; about 8 per cent lake areas, slough land, and land liable to flooding, while the remainder is open prairie land.

SETTLEMENT
The settlement of this locality commenced about twenty years ago with the greatest activity taking place during the construction of the railway through the district to the south. At present there are about thirty-five families living in the township most of whom are English speaking being of Canadian, American, or English descent. This township forms a part of the municipality of Melberta which comprises nine townships. From the condition of the roads it would appear that the township has received its fair share of local improvements so far as the construction and maintenance of roads are concerned. Within the township the, Provincial Government has constructed 26 miles of telephone lines and as a consequence many of the farmers have the advantage of this service.

CROPS AND STOCK
Wheat, oats and rye are the chief grain crops grown, while oat and rye hay is the chief fodder crop. M I of the vegetables commonly grown in western Canada are raised here. As a rule only enough are produced for the use of the farmers themselves. Generally, crops are successfully grown and harvested in this district although a few partial failures are reported which have been due to frost or drought.
Mixed farming is carried on by nearly all of the people. There is an abundance of horses in the district to meet all demands. The average number of cattle owned by each farmer is between 30 and 40 head. Nearly all have a few hogs averaging about 10 to each farmer. Because of the large amount of open range dairying is carried on successfully, and cream is taken to Mannville creamery which has recently been established.

RAY AND WINTER FEED FOR STOCK
The chief source of winter feed for stock is from oat and rye hay, which is cut green, and from straw. A fair amount of wild hay is secured from the edges of sloughs, and from low areas that dry up during the summer.

FUEL
Within the township the settlers have sufficient poplar wood for fuel. This wood when properly dried burns well and is considered very satisfactory.

WATER
The Vermilion river flows continuously throughout the summer season, and this together with a few fresh water lakes and, large 81oughs assure a good supply of water for stock. Good water is secured from wells drilled, dug or bored to depths ranging from 20 to 70 feet with a few slightly deeper than 70 feet. Vermilion river cuts the town- ship slightly, and flows southerly through sections 5, 6, and 7. The valley at this point is about 100 feet deep and about one and one-half miles wide.

The township with which this report deals is well situated with reference to shipping facilities, and the soil Is generally good. Because of the somewhat broken nature of the country the township as a whole is best suited for mixed farming and this is particularly true so long as the open free range exists.