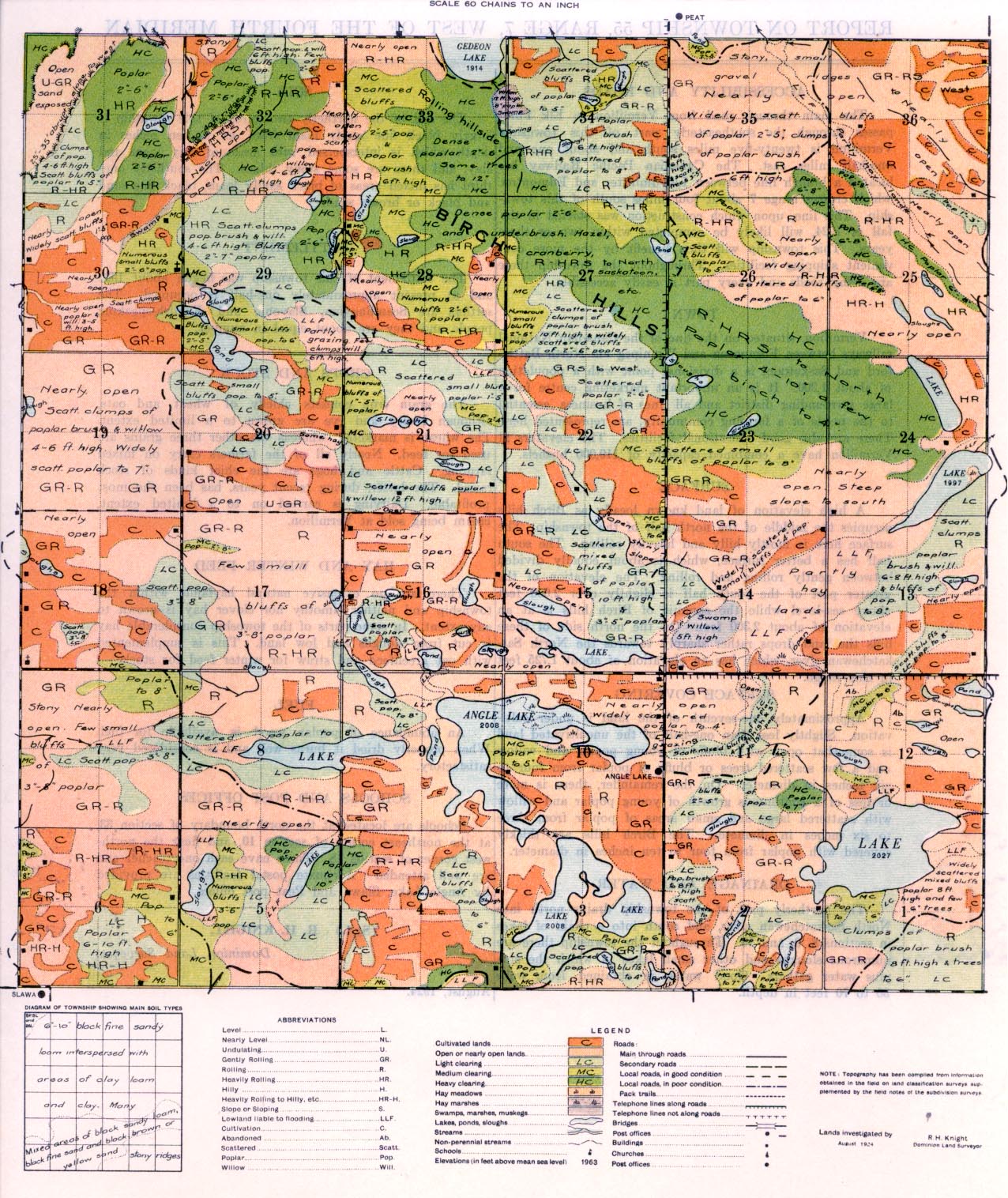 REPORT ON TOWNSHIP 55, RANGE 7, WEST OF THE FOURTH MERIDIAN

ACCESSIBILITY AND ROADS
The main through road from Vermilion to Elk Point passes through the southeasterly part of this township Vermilion is twenty-five miles south and about one and one-half miles east. The Canadian, Pacific Railway has located a branch line between Lloydminster and Edmonton which crosses range 7 about four miles south of this town- ship. This line, upon which construction was started in the fall of 1924, will likely be completed within two or three years. This township will then benefit by the more convenient shipping facilities. Throughout the township there are many roads and every part is easily accessible.

TOWN
Vermilion, situated on the line of the Canadian National railways between Edmonton and Winnipeg via North Battleford and Saskatoon, is a divisional point with a population of about 1,200. It is an important marketing centre for a large surrounding district and all lines of business, essential to the needs of a farming community, are represented here. There are also good educational facilities. The elevators at Vermilion have a combined capacity of 110,000 bushels.

SURFACE
A high elevation of land known locally as Birch hills occupies the middle of the north half of the township. The surface here is mostly hilly and heavily rolling. The south half has a better surface, which is about equally divided between gently rolling and rolling. The elevation of the greater part of the south half is slightly over 2,000 feet above sea-level while the summit of Birch hills is at an elevation of about 2,300 feet. On the north side of these hills the land drops
rather sharply towards the North Saskatchewan river, which has an elevation of about 1,725 feet in this range.

DRAINAGE AND WATER
The northerly part of the township drains north into North Saskatchewan river, and south into a chain of lakes in sections 8, 9, and 10. Throughout the township there axe numerous sloughs and other small lakes in which the surplus water gathers. Good water is obtained from wells 30 to 70 feet in depth.
I

SETTLEMENT
The settlement of this township was begun about 1907 and at present approximately one-half is occupied. The settlers are Scandinavian, Slavonic and English-speaking people and they are about equal in number.

CROPS AND STOCK
The grain crop consists chiefly of wheat and oats, although barley and rye are grown to a limited extent. The wheat is marketed, whereas the other three grains are used for feed. Nearly all of the farmers carry on mixed farming. Cattle and hogs are the chief kinds of stock raised. The latter, during recent years, has been the
most profitable. Dairying is carried on to a limited extent, cream being sold at Vermilion.

HAY AND WINTER FEED
There are no extensive natural hay lands within the township and neither timothy nor clover hay is grown to any extent. In some parts of the township considerable hay is cut from sloughs and low land. This is supplemented with oat greenfeed and straw for winter feed for stock.

SOIL
The soil of the northerly two-thirds of this township is largely black fine sandy loam from six to ten inches in depth which is interspersed with areas of clay loam and clay, and there are some stony ridges. The southerly one-third has mixed areas of black sandy loam, black fine sand and black or brown sand.

FUEL
An abundance of poplar wood is available for fuel. When properly dried it bums well and is considered very satisfactory.