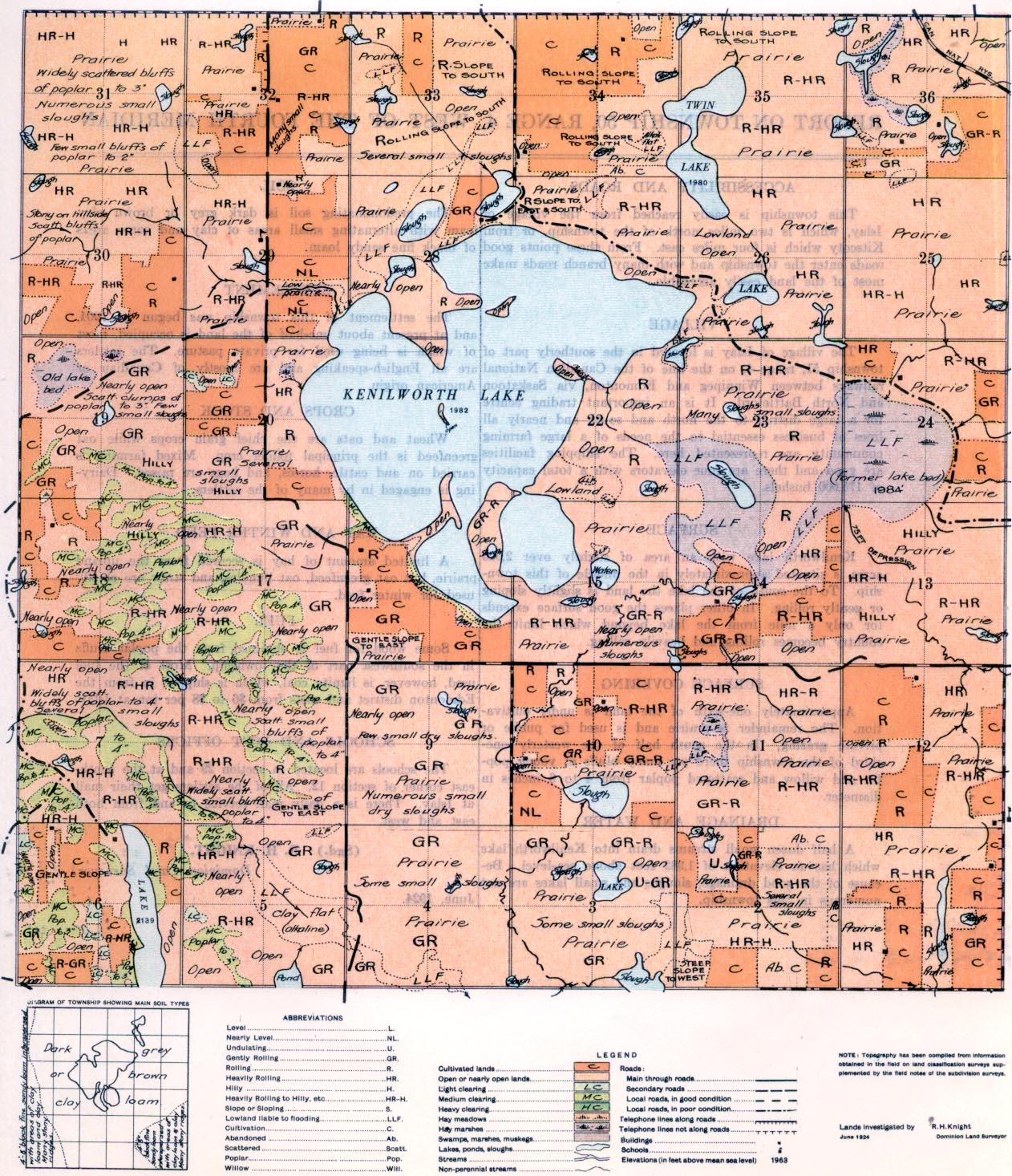 REPORT ON TOWNSHIP 50, RANGE 4, WEST OF THE FOURTH MERIDIAN

ACCESSIBILITY AND ROADS
This township is easily reached from the village of Islay, which is two miles north of the township, or from Kitscoty which is four miles east. From these points good roads enter the township and with many branch roads make most of the land easily accessible.

VILLAGE
The village of Islay is located in the southerly part of township 51, range 4, on the line of the Canadian National railways between Winnipeg and Edmonton via Saskatoon and North Battleford. It is an important trading centre for a large district to the north and south and nearly all lines of business essential to the needs of a large farming community are represented here. The shipping facilities, are good and there are four elevators with a total capacity of 175,000 bushels.

SURFACE
Kenilworth lake with an area of slightly over 2,000 acres is situated approximately in the middle of this township. To the south of the lake the land is slightly sloping or gently rolling. In other places the good surface extends for only a mile from the lake beyond which limit the country becomes rolling and heavily rolling.

SURFACE COVERING
Approximately one-sixth of the land is under cultivation. The remainder is prairie and is used for public or private grazing. In the south half of the westerly one-third of the township there are many bluffs of young poplar and willow and scattered poplar from 4 to 6 inches in diameter.

DRAINAGE AND WATER
A half dozen small streams drain into Kenilworth lake which has an elevation of 1,982 feet above sea-level. Because of the good drainage, sloughs and small lakes are not numerous in this township.

SOIL
The predominating soil is dark grey or brown clay loam with alternating small areas of clay and some areas of black fine sandy loam.

SETTLEMENT
The settlement of this township was begun in 1904, and at present about one-half of the land is occupied, most of which is being used for private pasture. The settlers are all English-speaking and are mostly of Canadian or American origin.

CROPS AND STOCK
Wheat and oats are the chief grain crops while oat greenfeed is the principal fodder crop. Mixed farming is carried on and cattle, horses, and hogs are raised. Dairying is engaged in by many of the settlers.

HAY AND WINTER FEED
A limited amount of hay is secured from the upland prairie, but oat greenfeed, oat bundles, and straw are chiefly used for winter feed.

FUEL
Some wood for fuel is obtained from the poplar bluffs in the southwest part of the township. Most of the fuel used, however, is lignite coal, which is shipped in from the Edmonton district and costs from $6 to $8 per ton at Islay.

SCHOOLS AND POST OFFICE
The schools are located in section 29 and at the southeast corner of section 12. All of the settlers get their mail at Islay. There is a daily mail service to and from both east and west.
June, 1924.