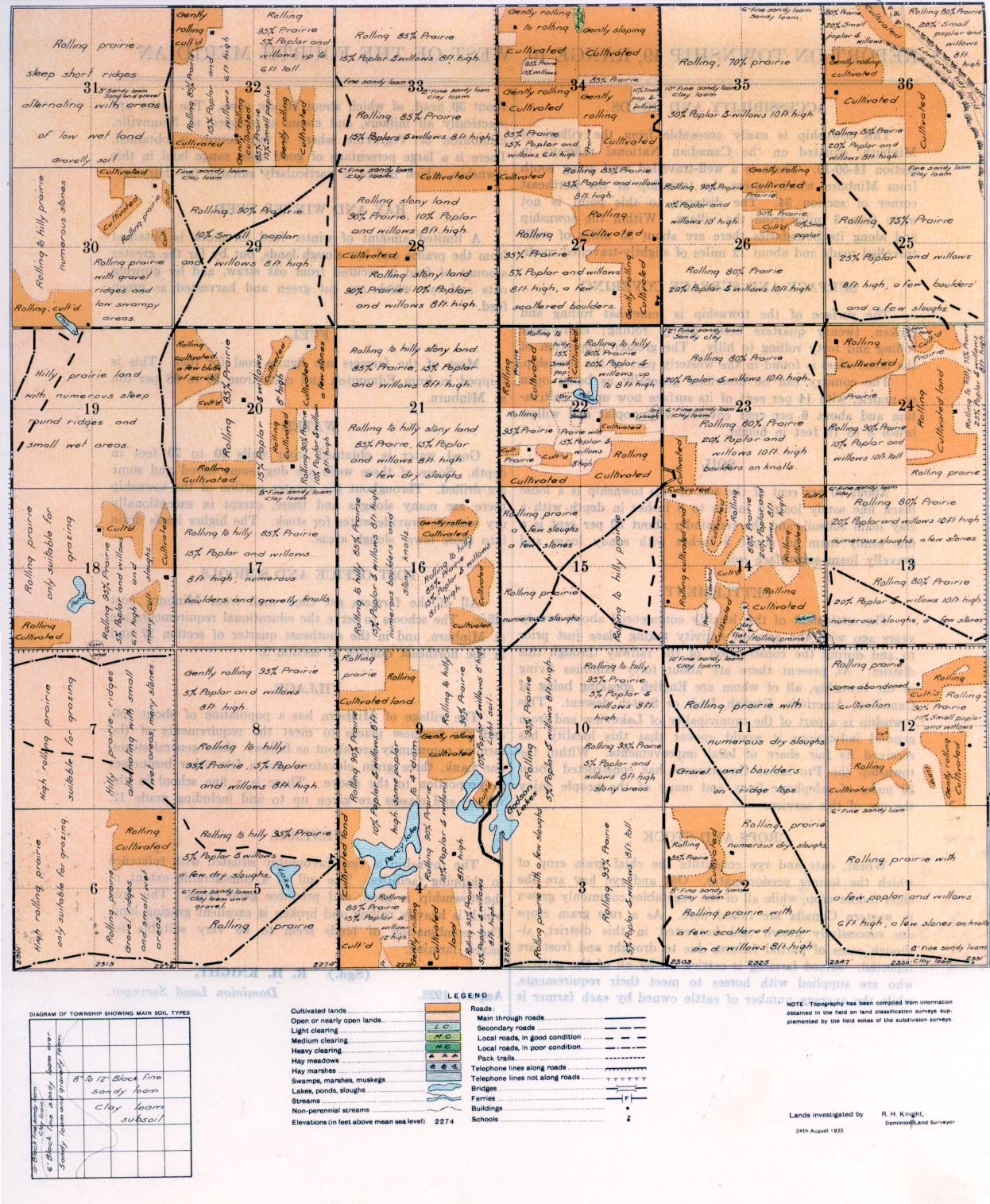 REPORT ON TOWNSHIP 49, RANGE 10, WEST OF THE FOURTH MERIDIAN

SURFACE AND SURFACE COVERING
The surface of the township is Romewbat rolling and of broken, twenty quarters being gently rolling; eighty-four rolling and forty rolling to hilly. The greater proportion of the latter class is found in the westerly part of the township.
The country can be described generally as being open or prairie, with 14 per cent of its surface now under cultivation and about 6 per cent covered with poplar and willow brush 5 to 10 feet in height.

SETTLEMENT
The settlement of this locality commenced about twenty years ago with the greatest activity taking place just prior to and during the construction of the railway through this district. At present there are about forty families living in the township, all of whom are English speaking being of Canadian, American, English, Irish or Scotch descent. This township is a part of the municipality of Lakeview and from general indications it would appear that this locality has received its fair share of local improvements. Within the township the Provincial Government has constructed about 20 miles of telephone lines, and many of the people enjoy the use of this service.
,
CROPS AND STOCK
Wheat, oats and rye constitute the chief grain crop of which the former predominates. Oat and rye hay are the chief fodder crop, while all of the vegetables commonly grown in western Canada ate raised here. As a rule grain crops are successfully grown and harvested in this district, although cases of partial failures due to drought and frost are reported. Mixed farming is carried on by all of the settlers, who are supplied with horses to meet their requirements, while the average. number of cattle owned by each farmer is about 30 head, of which about 10 are cows. The latter are practically all milkers, and cream is shipped to Mannville, Edmonton or Vegreville where a fair return is obtained. There is a large percentage of good open range land in this township, which makes it particularly suitable for dairying.

VILLAGE
The village of Minburn has a population of about 150, and the business places to meet the requirements of the farming community are about as follows: three general stores, one bank, three grain elevators, and a few other businesses, in proportion
to the above. There is a fine school in the village and claws are given up to and including grade 12.

FUEL
Most of the farmers use lignite coal for fuel. This is shipped in from Edmonton and costs from $6 to $8 per ton at Minburn.

WATER
Good, water is obtained from wells 20 to 70 feet in depth. Some of these wells are dug, some bored and some are drilled. Throughout the greater portion of the township ,there axe many sloughs and these, except in exceptionally dry seasons, provide water for stock. The higher lands drain into these lower slough areas.

HAY AND WINTER FEED
A limited amount of winter feed for stock is obtained from the prairie and low slough lands, but by far the greater amount of feed is secured from oat straw, and by growing oats and rye which are cut green and harvested as green feed.

GENERAL
The township is very favourably situated with reference to shipping facilities. The soil of a considerable extent of the township is good,
and produces good crops. The area which is heavily rolling and broken is excellent grazing land. The combination of lands seem to be very suitable for mixed farming.