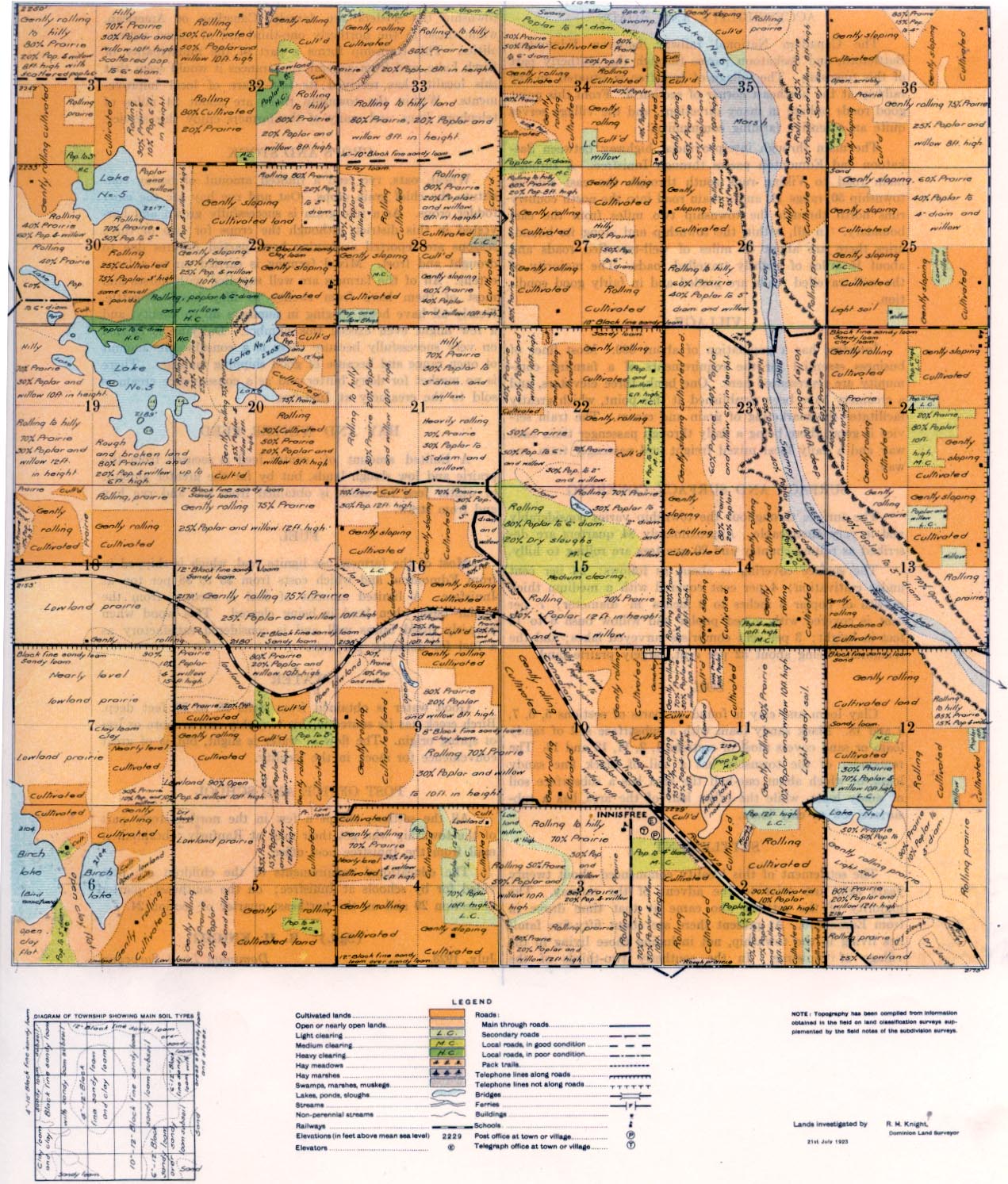 REPORT ON TOWNSHIP 51, RANGE 11, WEST OF THE FOURTH MERIDIAN

ACCESSIBILITY AND ROADS
The Canadian National railway between Edmonton, Battleford, and Saskatoon passes through the southerly part of this township. The village of Innisfree is situated on' the railway at the northeast corner of section 3. From this point good roads radiate in many directions, and the village serves quite an extensive farming community.
The main through interprovincial. highway between Saskatoon and Edmonton passes through Innisfree. A through main road to Viking runs south through the east side of township 50, range 11, and a main road into the north country runs north through the township two miles from the east boundary. In all, within the township and along its bound- aries there are about 35 miles of well-travelled roads and about 15 miles of slightly travelled roads. The majority of the well-travelled roads are graded and in fairly good condition.

VILLAGE
Innisfree has a population of about 300. Most lines of business essential for the requirements of a farming community are represented here. One bank, three elevators, and u creamery have been established at this point, which greatly facilitates the marketing of grain and cream. The train service is good, there being a daily through passenger train each way and a daily local mixed freight and passenger train one way.

SURFACE AND SURFACE COVERING
The surface throughout the township varies considerably and is very changeable. Approximately 84 quarters are de- scribed as rolling country and 20 quarters are rolling to hilly. The surface covering is about as follows: 34 per cent under cultivation; 4 per cent covered with a medium thick growth of poplar 3 inches to 6 inches in diameter; 7 per cent is covered with mixed poplar and willow bush 6 to 12 feet in height; 3 per cent comprises surveyed lakes; and the remainder, being about 52 per cent,.largely prairie land.

SETTLEMENT I
The settlement of this locality commenced about twenty years ago, just prior to the advent of the railway. The majority of the settlers who came at that time drove in from Edmonton. At present there-are about fifty-five families living in the township, not including those living in the village of Innisfree. In the southerly two-thirds of the township the settlers are largely Canadian or American while those in the northerly one-third are of mixed nationalities. This township forms a part of the municipality of Birch Lake, and from general appearances it would seem that this locality has received its fair share of local improvements. Within the township there are about 24 miles of telephone lines, and many of the farmers enjoy this service.

CROPS AND STOCK
Wheat, oats, rye, and a limited amount of barley constitute the chief grain crops. Oat and rye hay are the chief fodder crops. As a rule grain is successfully grown and harvested in this district, although the crops for two or three seasons are reported as having been partial failures due to drought and frost. Mixed farming is carried on to a large extent. All of the farmers are well supplied with horses and most of them have from twenty to fifty head of cattle. Nearly all have hogs, ranging in numbers up to twenty, and a few might even exceed this number. Dairying is carried on very successfully because there is a considerable amount oi open range and because of good shipping facilities. There is no market for dairy butter and as a consequence cream is sold to the creamery at Innisfree.

WATER
Good water is obtained f rom wells 20 to 70 feet deep. Birch creek has its source in this township and is more or less of spring origin. The flow of water is slight, but is of great convenience for stock in the locality.

FUEL
Most of the farmers use lignite coal, which is shipped in from Edmonton, and which costs from $6 to $8 per ton at Innisfree. A limited amount of fuel is secured from the poplar bush when land is
being cleared. This wood when properly dried burns well and is considered satisfactory as it fuel for domestic purposes.