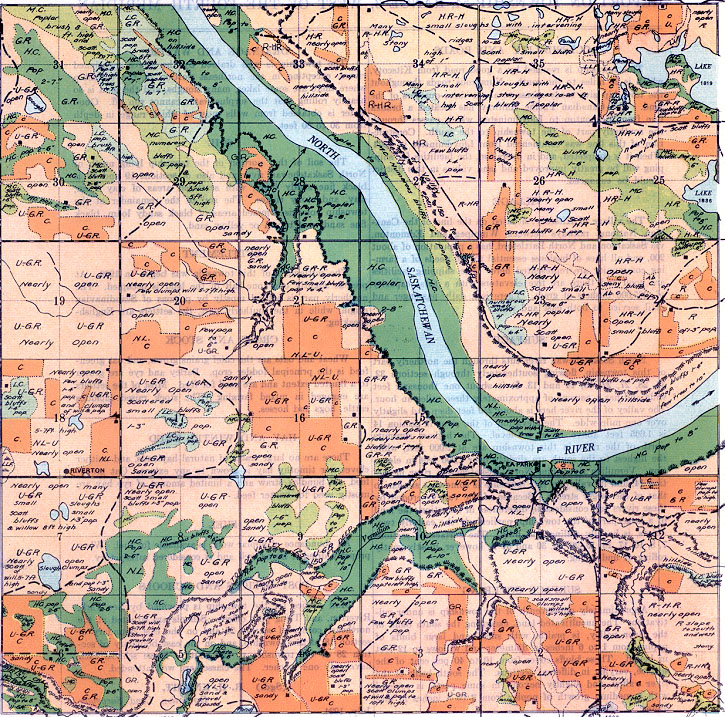 REPORT ON TOWNSHIP 54, RANGE 3, WEST OF THE FOURTH MERIDIAN

ACCESSIBILITY AND ROADS
This township is reached by a good road from Kitscoty, which is 20 miles to the south. Numerous roads throughout the township give ready access to about three-quarters of the land. The Canadian Pacific Railway has located a branch line from Edmonton to Lloydminster, which passes through the southerly part of the township to the south. Construction of this line was commenced from Lloydminster in 1924. When it is completed, and in operation, the, facilities for shipping will be greatly improved and land values in this district should be enhanced.

VILLAGE
The village of Kitscoty, situated on the line of the Canadian National railways between Winnipeg and Edmonton, via Saskatoon and North Battleford, has a population of about 200, and all lines of business essential to the needs of a farming community are represented here. The shipping facilities are good and there are five elevators with a total capacity of 285,000 bushels of grain. There is a daily passenger and mail service to both east and west.

SURFACE
North Saskatchewan river cuts through the northerly part of this township, flowing southeasterly through sections 32, 33, 28, 27, 22, 15, 14 and 13. It is about one thousand feet wide and has a current of approximately three miles an hour. The valley of the river here is about 250 feet deep and slightly over one mile wide. The elevation of the river in section 14 is 1,665 feet above mean sea-level. The highest summits north of the river in this township are at 2,000 feet, while the highest to the south are slightly over 1,900 feet in elevation. Vermilion river joins North Saskatchewan river in section 14, and its valley in this township is somewhat
similar to that of the larger stream. Because of the valleys eroded by these rivers and considerable differences in elevation, the land of a large part of the township, particularly the easterly two- thirds, is heavily rolling and hilly, The surface of sections 7, 8, 16, 17, 18, 197 20, 29, 30 and 31 is, however, mostly gently rolling or undulating.

SETTLEMENT
The settlement of this township was begun in 1906. At present slightly over one-half of the land is occupied. The .northerly part is settled mostly by persons of Scandinavian origin, while in the southerly part, the settlers are English-speaking.

DRAINAGE AND WATER
The township is well drained by the above mentioned rivers, excepting in the northeast portion of the township where there are some lakes, many sloughs, and the land is so heavily rolling that the surplus water cannot run off. Good water is obtained from wells most of which range in depth from 30 to 80 feet.

CROPS AND STOCK
Wheat and oats are the chief grains grown, and oat green- feed is the principal fodder crop. Barley and rye are grown to a limited extent and are used for feed. Most of the settlers are engaged in mixed farming. The stock raised includes cattle, hogs and horses.

HAY AND, WINTER FEED
There are no large tracts, of natural haylands, and neither clover nor timothy hay is grown to any extent. Oat green-feed, oat bundles, straw and a limited amount of rye hay are mostly used for winter feed.