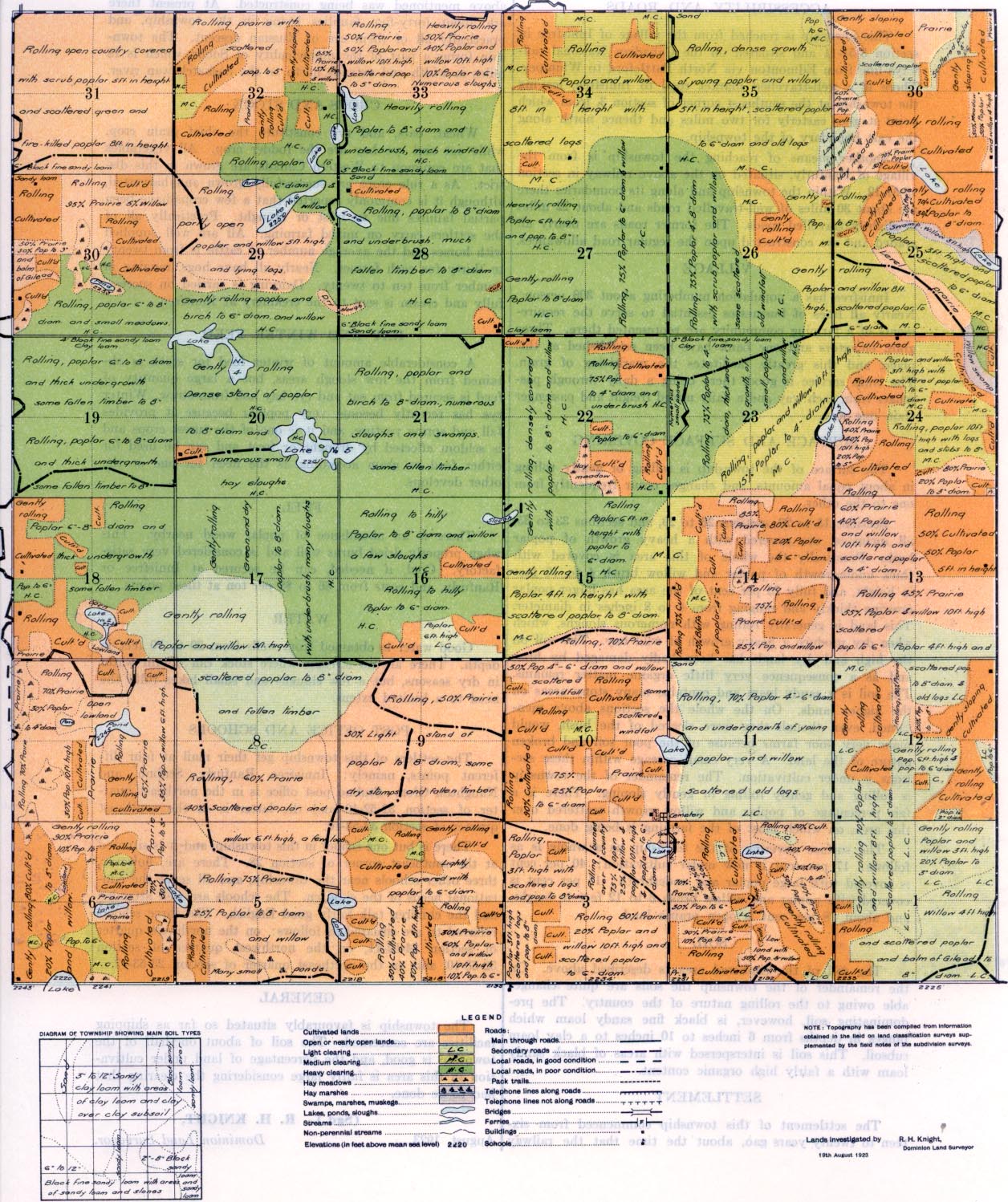 REPORT ON TOWNSHIP 53, RANGE 11, WEST OF THE FOURTH MERIDIAN

ACCESSIBILITY AND ROADS
This township is reached from the village of Innisfree in section 3-51-11 and situated on the Canadian National rail- ways line from Edmonton via North Battleford to Winnipeg. There is a well-travelled market road to Innisfree, leaving the township at the southeast corner of section 3, from which point it goes easterly for two miles and thence north along the east boundary of the township.
Another means of reaching the township is from the village of Ranfurly, situated on the above railway in section 15-51-12. Within the township and along its boundaries there are about 30 miles of well-travelled roads and about 22 miles of slightly travelled roads. The former roads are nearly all graded and are constructed upon the regular road allowances.

VILLAGE
Innisfree has a population numbering about 300 persons. Nearly all lines of businesses essential to serve the requirements of a farming community are represented there. Three grain elevators and one bank have been established at this place, and this greatly facilitates the marketing of grain. The train service is good, there being a daily through passenger,train each way and a daily mixed freight and passenger train one way.

SURFACE AND SURFACE COVERING
'The surface of the township is rolling or gently rolling in about equal amounts, and changes occur frequently from one to the other.
Sections 15 to 23, sections 26 to 29, and sections 33 to 35. all inclusive, are covered with a heavy growth of poplar bush. Practically the whole of this area is covered with thick undergrowth of poplar and willow brush 4 to 10 feet in height, and fully 75 per cent of the area has larger poplar growing thickly and ranging from 4 to 8 inches in diameter. This land is generally rolling with numerous sloughs, which when dry produce a heavy growth of wild hay. The soil on the high and, dry lands has been badly damaged by fires, and as a consequence very little organic matter remains. The soil is a sandy loam and contains many stony areas on the higher lands. On the whole the sections above mentioned, even though they were cleared of the bush, would make very poor farms because of the poor soil and broken nature of the land. A very small acreage within these sections is under cultivation. The remainder of the township is rolling and gently rolling or gently sloping. There is a fair percentage of poplar and willow growth scattered over this area, on which most of the farming is being done.
The surface covering of the township as a whole is as follows: 17 per cent is now under cultivation; 40 per cent is covered with large poplar and underbrush; 15 per cent is covered with poplar and willow brush 6 to 12 feet in height, and about 28 percent is open prairie land.

SOIL
The soil of the timbered area is described above. On the remainder of the township the soils are quite change-able owing to the rolling nature of the country. The predominating soil, however, is black fine sandy loam which ranges in depths from 6 inches to 10 inches to a clay, loam subsoil. This soil is interspersed with areas of black sandy loam with a fairly high organic content.

SETTLEMENT
The settlement of this township-- commenced from sixteen to twenty years ago, about the time that the railway above mentioned was being constructed. At present there are about forty-five families living in the township, and practically all of them are of Russian descent. The township forms a part of the municipality of Sobor, which is 18 miles in width and extends north to the Saskatchewan river.

CROPS AND STOCK
Wheat, oats, and rye constitute the chief grain crop, while oat and rye hay are the fodder crop. All vegetables that are common to Western Canada are grown in this district. As a rule crops are successfully grown and harvested, although it is commonly reported that a few crops have been partial failures due to frost or drought. Practically all of the settlers carry on mixed farming. All are well supplied with horses and the average number of cattle is from twenty to thirty for each farmer. Nearly all have hogs, ranging in number from ten to twenty. Dairying is carried on success- fully and cream is sent to the creamery at Innisfree.

HAY AND WINTER FEED
A considerable amount of winter feed for stock is obtained from the low slough areas, but a large quantity of feed is secured from oat and rye hay and from straw. Winter rye has recently become very popular because it provides fall and spring pasture, and it is one of the surest crops and ,is seldom affected by drought or frost and can be used for either feed or grain according as the need for one or the other develops.

FUEL
There is an abundance of poplar wood nearby. This when properly dried burns well and is considered very satisfactory. Coal, if needed, can be secured at Innisfree or Ranfurly, and costs from $6 to $8 per ton at these points.

WATER
Good water is obtained from wells from 20 to 70 feet in depth. There are no streams where stock can obtain water in dry seasons, but a few sloughs and small lakes fulfil the need to a limited extent.

GENERAL
The township is favourably situated so far as shipping facilities are concerned. The soil of about one-half of the township is good, and the percentage of land under cultivation in this area is fairly large considering the clearing that had to be done.