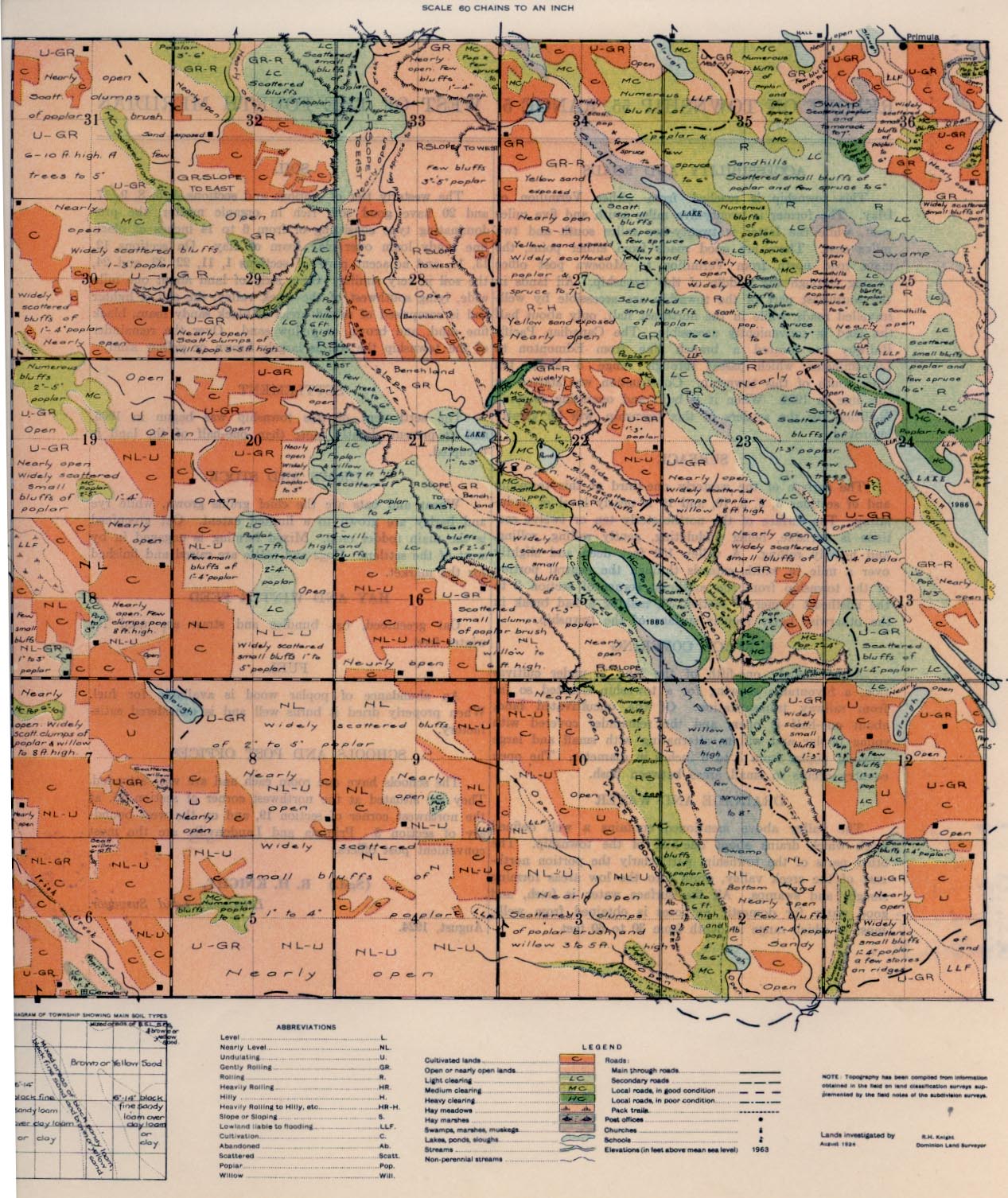 REPORT ON TOWNSHIP 55, RANGE 5, WEST OF THE FOURTH MERIDIAN

ACCESSABILITY AND ROADS
This township is reached from either Vermilion or Islay. The former is twenty-five miles south and five miles west, while the latter is twenty-two miles south and two miles east. There are good roads from either point, the main road north from Vermilion to Mooswa post office passing through the middle of this township. All lands in the southwest part of the township are accessible by well-travelled roads, while in the northeast half, only about half of the land is conveniently accessible. The Canadian Pacific Railway has located a branch line from Edmonton to Lloydminster, which passes through range 5 about ten miles south of this township. Construction was started on this line in 1924. When it is built and operating shipping facilities, for the settlers of this township, will be greatly improved.

SURFACE
The surface of the westerly one-third of this township and of sections 3, 4, 9, 10, and 16 is nearly level or undulating. The surface of the northeasterly ten or twelve sections is variable, being undulating, gently rolling, rolling, and heavily rolling. A valley 150 feet deep and slightly over a mile in width extends through the central portion of the township from the southeast corner of section 2 to the northeast corner of section 32, making a bad break in the otherwise fairly regular surface of the township.

SURFACE COVERING
Approximately one-fifth of the land is under cultivation, a favourable. showing for a township situated so far from railway transportation. Of the uncultivated land about one-half is open, and the remainder covered with young poplar and willow, alternating with small and large areas of poplar from 3 to 6 inches in diameter. The open country occurs in small areas between bush.

DRAINAGE AND WATER
The valley above mentioned contains a well defined creek which drains about one-half of the township. The other parts of the township, particularly the portion northeast of the creek valley, drain into the low areas forming sloughs and swamps. All the surface water is fresh, and good water for domestic purposes is obtained from wells, most of which range in depth from 30 to 60 feet.

SOIL
The westerly tier of sections and sections 4, 5, 8, 9, 17, and 20 have good soil, rich in organic matter, the pre- dominating type consisting of from 6 to 14 inches of black fine sandy loam over clay loam or clay. On sections 12, 13, 14, and adjacent parts of sections 1, 11, 22, 23, and 24, the soil is very similar. On a strip of land about one mile wide, lying southwest of the creek valley, the soil is lighter and is comprised of mixed areas of black sandy loam, black fine. sand and brown or yellow sand. Over the remainder of the township the soil is largely brown or yellow sand.

SETTLEMENT
The settlement of this township was begun in 1906, and at present slightly more than one-half of the land is occupied.

CROPS AND STOCK
Wheat and oats are the chief grains grown, while rye and barley are grown to a limited extent. Oat greenfeed is the main fodder crop. Mixed farming is engaged in by most of the settlers. Hogs and cattle are raised and finished for the market.