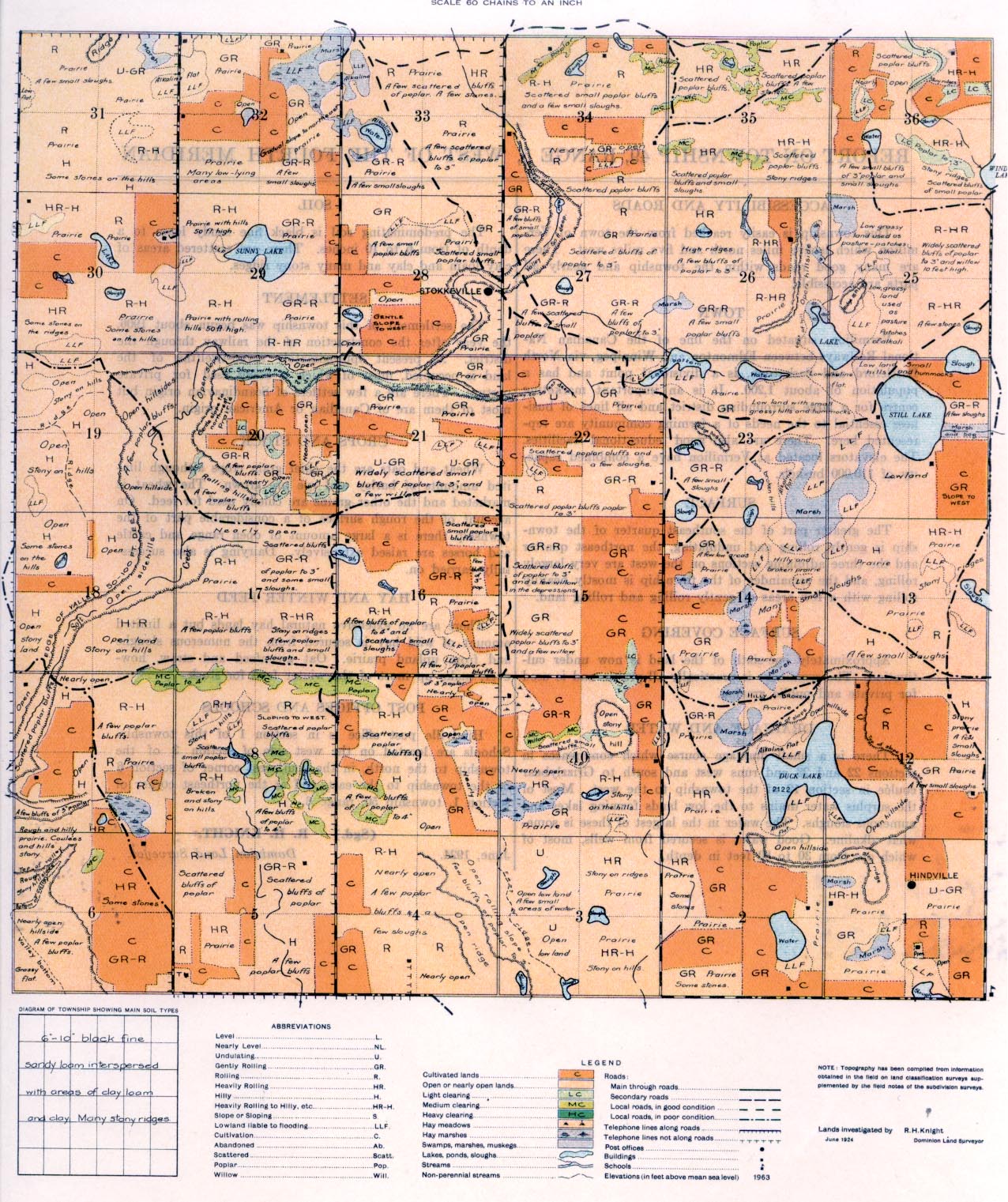 REPORT ON TOWNSHIP 49, RANGE 5, WEST OF THE FOURTH MERIDIAN

ACCESSIBILITY AND ROADS
This township is easily reached from the town of Vermilion which is five miles north and five miles west. There are many good roads within the township and nearly all parts are accessible.

TOWN
Vermilion, situated on the line of the Canadian National Railways between Edmonton and Winnipeg, via North Battleford and Saskatoon, is a divisional point and has a population of about 1,200. It is an important marketing centre for a large surrounding district and all lines of business essential to the needs of a farming community are represented here. There are also good educational facilities. The elevators located at Vermilion have a combined capacity of 110,000 bushels.

SURFACE COVERING
Approximately one-sixth of the land is now under cultivation. The remainder is practically all prairie and is used for private and public grazing.

DRAINAGE AND WATER
There is a small drainage course which commences in sections 22 and 23 and runs west and south to Grizzlybear coulee in section 12
of the township to the west. Most of the surplus water drains to the low lands forming lakes and numerous sloughs. The water in the largest of these is somewhat alkaline. Good water is secured from wells, most of which are from 30 to 80 feet in depth.

SOIL
The predominating soil is black fine sandy loam to a depth of from 6 to 10 inches. There are scattered areas of clay loam and clay and many stony ridges.

SETTLEMENT
The settlement of this township was begun about 1906, the year after the construction of the railway through the district. At present approximately seven-twelfths of the land is occupied, most of which is being used for private pasture. There are a few settlers of Scandinavian origin but most of them are of Canadian or American origin.

CROPS AND STOCK
Wheat and oats are the chief grain crops although limited amounts of barley and rye are grown. The wheat is marketed and the other grains are chiefly used for feed. On account of the rough surface of a considerable part of the township there is a large amount of open range and cattle and horses are raised extensively. Dairying is also successfully carried on.

HAY AND WINTER FEED
There are no extensive natural hay lands but a limited amount of wild hay is secured from the numerous sloughs and from upland prairie. Oat greenfeed and straw, however, make up most of the winter feed for stock.