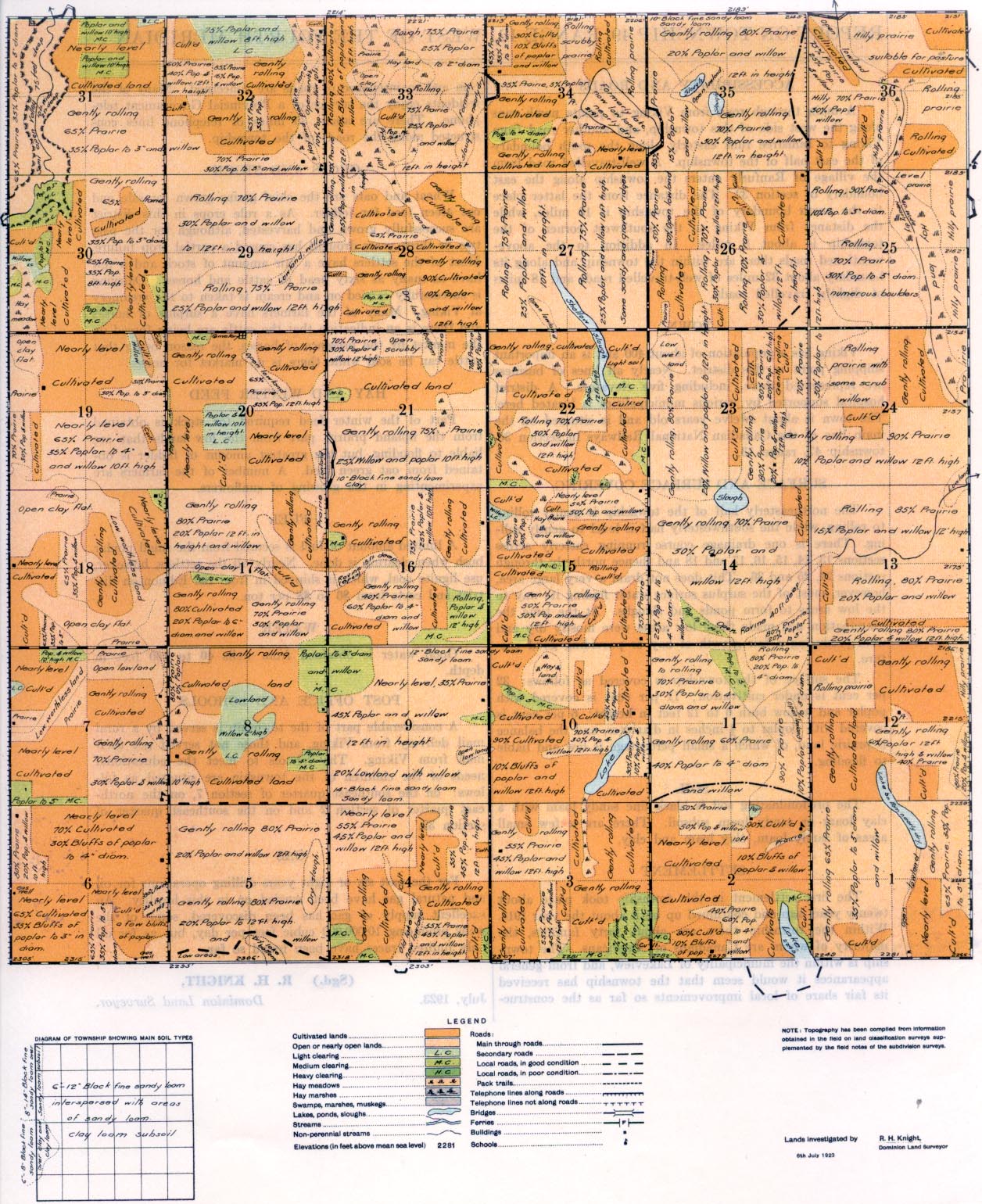 REPORT ON TOWNSHIP 49, RANGE 12, WEST OF THE FOURTH MERIDIAN

I TOWN
Viking has a population of about 400 and is an important shipping point in this district., Nearly all lines of business tire represented there, including five elevators. A district hospital supported by various municipalities is located here. The town is about twelve years old and is situated on the main line of the Canadian National Railways in section 36, township 47, range 13.

SURFACE AND SURFACE COVERING
The northeasterly half of the township is gently rolling to rolling, while the southwesterly half is level to gently rolling. There is one drainage course running easterly across sections 13, 14, 15, 16, 17 and 18 and thence northerly through sections 24, 25 and 36. This does not drain a very large area, however, most of the surplus surface water finding its way to;, the low areas to form ponds and sloughs. At the time the examination was made these low areas were mostly dry and were producing a fair growth of hay or providing good pasture.
The surface of the township is covered as follows: 32 per cent is under cultivation; 11 per cent is covered with poplar and willow bush 6 to 12 feet in height; 6 per cent is covered with poplar to 4 inches in diameter, and the balance is prairie land, of which a small percentage is low and liable to flooding.

CROPS AND STOCK
Wheat and oats are the chief grains grown for sale and oat green feed for fodder. As a rule crops in this district are successfully grown and harvested, although for the past two or three years drought has caused a partial crop failure. Most of the settlers have a fair amount of stock and a few have as many as sixty head of cattle and horses. Dairying is successfully carried on and cream is taken to the creamery at Viking. Many of the farmers have a surplus of horses and there is an indication, that the cattle are being forced on the market by the presence of horses, the reason being that cattle can be sold while there is no market for horses.

SOIL
The predominating soil is black fine sandy loam with a clay loam or sandy loam subsoil. There are a few small areas of sandy loam, clay loam and clay.

HAY AND WINTER FEED
Part of the winter feed required for stock is obtained from the upland prairie, part from the low lands that are .liable to flooding, but the greatest amount of fodder is obtained from oat green feed. A number of the farmers are experimenting in the growing of sunflowers,

SETTLEMENT
The first settlement in this township took place about twenty years ago and continued up until about the year 1918. Within the township there are about forty families, the majority of whom are Canadians or Americans. The town- ship is within the municipality of Lakeview, and from general appearances it would seem that the township has received its fair share of local improvements so far as the construction and maintenance of roads are concerned. Many of the residents enjoy the service of a Provincial Government telephone. There are about 35 miles of telephone lines constructed along the roads of the township.

FUEL
A limited amount of fuel is secured from the small poplar bush when clearing is done. Nearly all the settlers, however, use lignite coal, which is shipped in from the Edmonton district and costs from $6 to $8 per ton.

WATER
Good water is obtained from wells 40 to 150 feet depth.

POST OFFICE AND SCHOOLS
A considerable part of the township is served by a rural mail delivery from Viking, and those not served get their mail from Viking. The schools to meet the educational needs of the children of the township are situated as follows: on the southeast quarter of section 7, on the north- east quarter of section 2 and on the southeast quarter of section 32.
For the past six or eight years drilling operations for oil and natural gas have been carried on in this locality. An excellent supply of gas has been discovered, some of the wells producing 10,000,000 cubic feet per day, but as for oil only limited traces have been found so far.
July, 1923