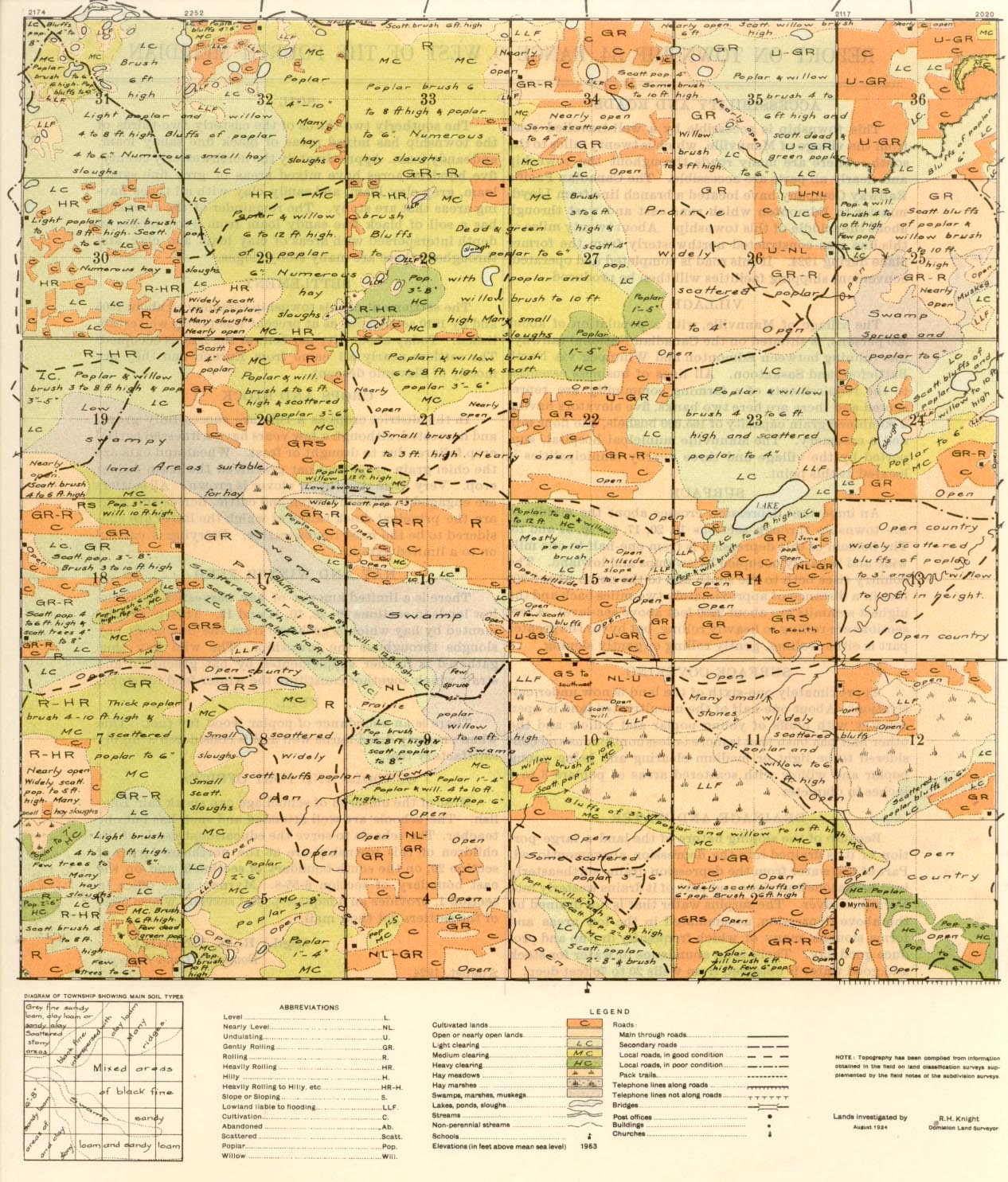 REPORT ON TOWNSHIP 54, RANGE 9, WEST OF THE FOURTH MERIDIAN

ACCESSIBILITY AND ROADS
This township is accessible by a well-travelled road from the village of Mannville, which is twenty miles to the south. There are many roads throughout the township and nearly all parts are accessible. The Canadian Pacific Railway Company have located a branch line from Lloydminster to Edmonton which runs east and west through about the middle of this township. About twenty miles of this line was constructed northwesterly from the former place during 1924. If this road is completed and operated, convenient shipping facilities will then be produced.

VILLAGE
The village of Mannville, with a population of about 400 persons, is situated on the Canadian National railways line running between Edmonton and Winnipeg via North Battleford and Saskatoon. All lines of business essential to the requirements of a. farming community are represented and there are here two banks, five elevators having a combined grain capacity of 165,000 bushels, one flour mill and a creamery. The Mannville municipal hospital, supported by the village and three nearby municipalities is located at this point.

SURFACE
An important depression crosses about the middle of the township through sections 19, 20, 17, 16, 10, 11 and 13. The bottom of this depression is from one-half to one mile wide and is partly occupied by swamps and lowland. The country rises both to the south and to the north about 200 feet in a distance of
approximately two miles back and the highest summits are about 2200 feet above sea-level. A few sections are rolling to heavily rolling, but by far the greater part is either rolling, gently rolling or gently sloping.

SURFACE COVERING
Approximately one-sixth of the land is now under cultivation. About one-half of the uncultivated land is open country with bluffs of young poplar and willow and the other half has bush that, is more or less continuous and considered to be light or medium clearing and being young poplar and willow with scattered areas of poplars 3 to inches in diameter.

DRAINAGE AND WATER
Because of the sloping nature of the land a large portion of it is drained into the depression abovementioned. Part of the water from the depression drains northeasterly into Saskatchewan river and part of it drains westerly into Vermilion river. The surplus water that is not drained by the above depression, accumulated in the low areas and forms sloughs, many of which frequently dry up and produce good hay. There is an abundance of water for stock and good water is obtained from wells 20 to 70 feet deep.

SETTLEMENT
The settlement of this township commenced about 1905 and by 3.910 settlement as at present was pretty well established. Today about fifty per cent of the land is occupied. The settlers nearly all came from Europe and they are mostly of Slavonic descent.

CROPS AND STOCK
In this district crops as a rule are successfully grown and harvested, although a few years have witnessed partial crop failures due to drought or frost. Wheat and cats are the chief grain crops and oat greenfeed the main fodder crop. Very little timothy or clover is grown. All settlers are engaged in mixed farming and cattle, horses and hogs are the principal stock raised of which the latter are considered to be the most remunerative. Dairying is carried on to a limited extent.

HAY AND WINTER FEED
There is a limited amount of hay harvested from the low lands in sections 19, 20, 10, 11 and 12. This is supplemented by hay which is gathered from the numerous hay sloughs throughout the township. The wild hay thus gathered is further supplemented by oat greenfeed and straw which together constitute the winter feed for stock.

FUEL
There is an abundance of poplar wood for fuel. This when properly dried burns well and is considered a highly satisfactory fuel.

SCHOOLS AND POST OFFICES
Most of the children of school age can speak fair English. The schools are well attended and each has but one teacher. The schools to serve the educational needs of the children of this township are at the northeast corner of section 20, on the south boundary of section 3, and on the east boundary of section 6-55-8. Myrnam post office in section 1, provides an adequate postal service, where most of the settlers get their mail.