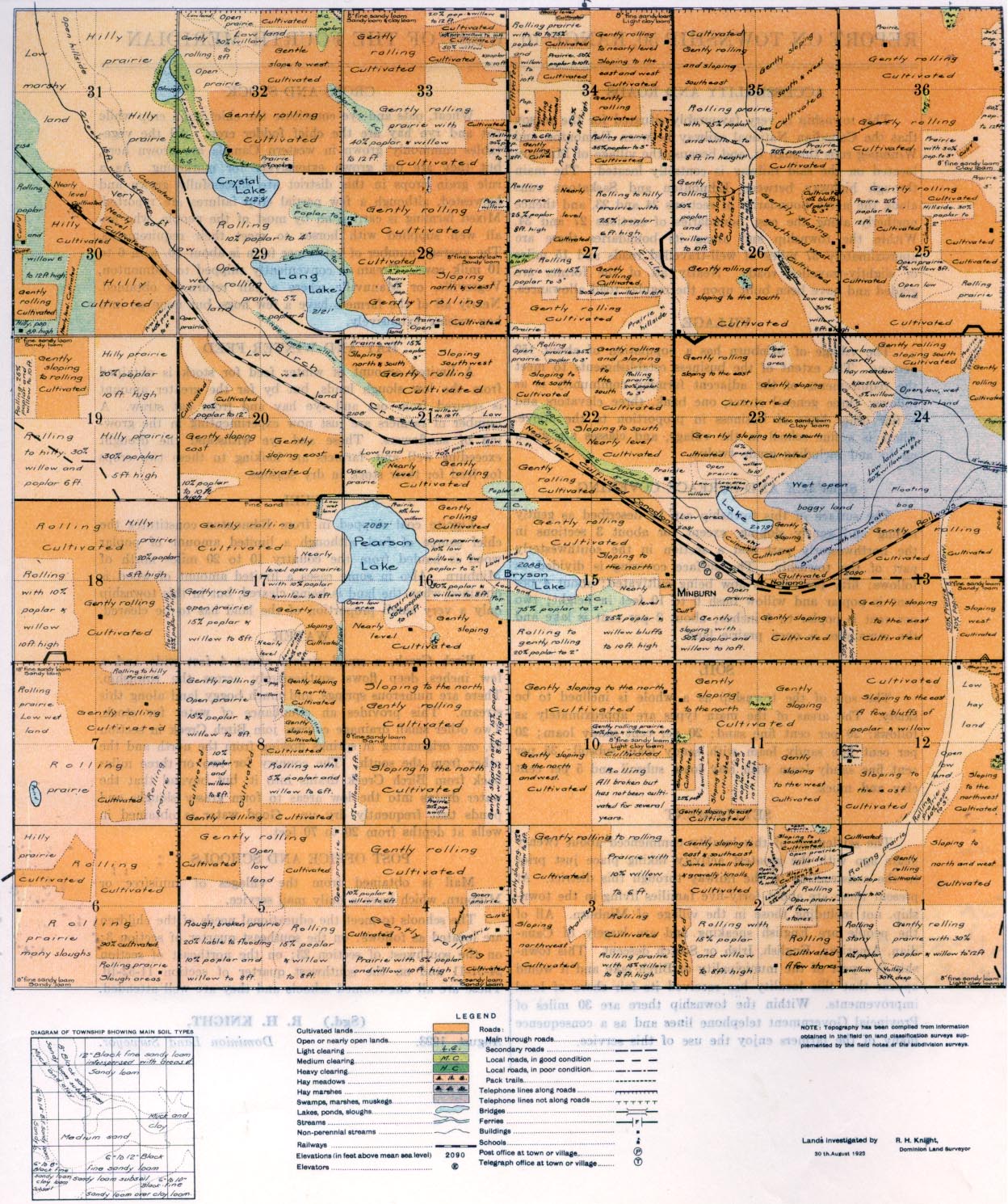 REPORT ON TOWNSHIP 50, RANGE 10, WEST OF THE FOURTH MERIDIAN

ACCESSIBILITY AND ROADS
This township is very favourably situated for the reason that the Canadian National railway between Edmonton and Winnipeg runs through i.t, and because the village of Minburn located on the said railway is centrally located. The main through highway between Edmonton and Saskatoon runs along the north boundaries of sections 24 and 23, and thence northerly along the east boundaries of sections 27 and, 34.1 Within the township and along its boundaries there are approximate ly 37 miles of well-travelled roads and 15 miles of slightly-travelled roads. Nearly all of the former are graded and have been built upon the regular road allowances.

VILLAGE
The village of Minburn has a population of about 150 persons. The extent of the business establishments to meet the requirements of the adjacent farming community, is as follows: three general stores, one bank, three elevators and a few other lines of business in proportion to the above. There is a fine school in the village, and classes are given up to and including grade twelve.

SETTLEMENT
The settlement of this locality commenced about twenty years ago with the greatest activity taking place just prior to the construction of the railway through this district. At present there are about forty-five families living in the township, not including those in the village of Minburn. All of the people axe English speaking and are largely of Canadian, American, English, Irish or Scotch descent. This township is a part of the municipality of Birch lake and it would appear that this locality has received its fair share of local improvements. Within the township there are 30 miles of Provincial Government telephone lines and as a consequence many of the farmers enjoy the use of this service.

CROPS AND STOCK
Wheat, oats and rye constitute the chief grain crop while oat and rye hay are the chief fodder crop. All the vegetables commonly grown in western Canada are grown here, but they are not grown extensively for marketing. As a rule grain qrops in this district are successfully grown and harvested, although a few partial crop failures are reported. Mixed farming is carried on by most of the people, who axe all well supplied with horses to meet their requirements. The average number of cattle per farm is about 30, with 6 to 10 milk cows. Cream is conveniently shipped to Edmonton, Vegreville, or Mannville where a fair return is obtained.
Nearly all of the farmers have a few hogs, but none go into hog raising extensively.

HAY AND WINTER FEED
A limited amount of winter feed for stock is obtained from the low slough lands, but by far the greater amount is secured from oat and rye hay and from oat straw. A number of farmers are just now experimenting in the growing of sunflowers. These and rye withstand the drought exceeding well and, farmers are looking to these two crops for feed for their stock in dry seasons.

FUEL
Lignite coal shipped in from Edmonton constitutes the chief source of fuel, although a limited amount of poplar wood is hauled from the country 10 to 20 miles north of Minburn. Also in some cases a limited amount of wood is obtained when the land is being cleaned, but in this township only a very small proportion of the land has to be cleared.

WATER
Birch Creek, a small stream about 4 feet wide and a few inches deep flows southeasterly across the township. There are numerous springs, and much boggy land along this stream. This provides an abundance of water for stock. Two other small drainage courses join Birch Creek in section 24, one originating in springs flowing from the north and the other from the south. The country for two or three miles back from Birch Creek drains into it, but beyond that the water drains into the low areas to form grassy sloughs and ponds that frequently dry up. Good water is obtained in wells at depths from 20 to 70 feet.