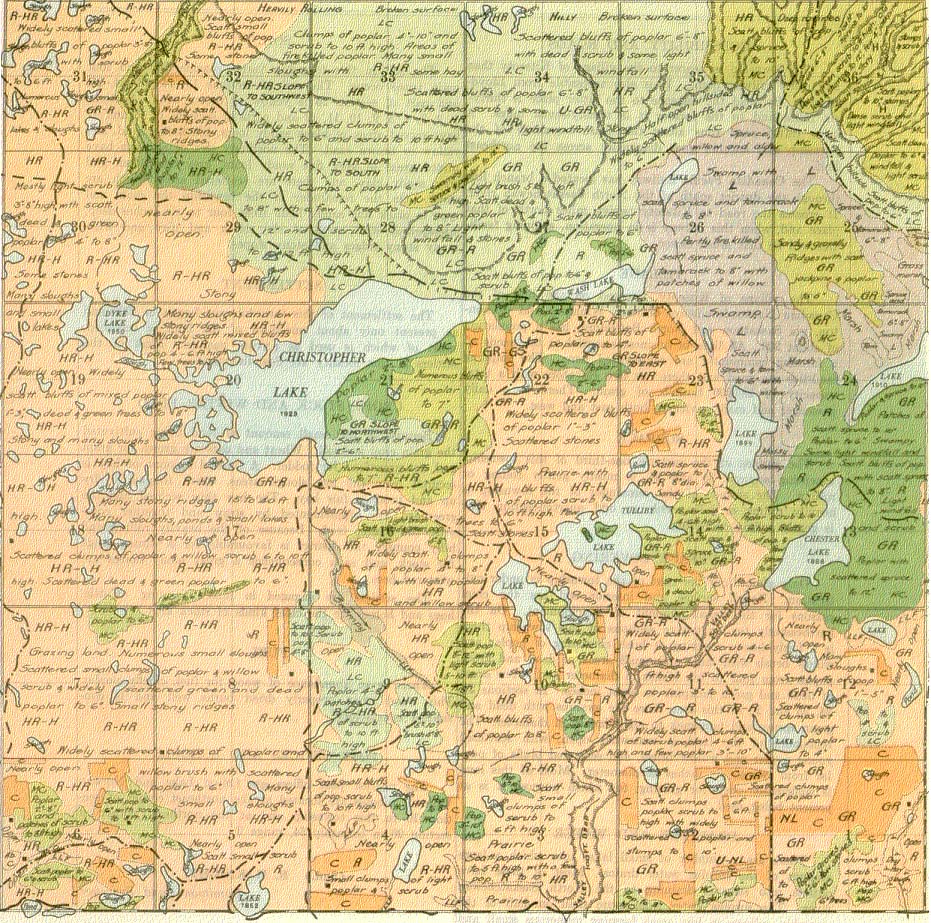 REPORT ON TOWNSHIP 55, RANGE 2, WEST OF THE FOURTH MERIDIAN

This township is nearer to the village, of Kitscoty than any other railway point. It is also accessible from Lloyd­minster By road the distance to the latter place is thirty- six miles and to the former it is twenty-seven miles. A main traffic road runs along the south boundary of the township and another goes diagonally across the northeast half.

The Canadian Pacific Railway has located •a branch line through the district south of the North Saskatchewan river. It crosses the road to Kitscoty twelve miles north of that place and, when this railway is in operation, shipping facili­ties will be that much closer.

The village of Kitscoty, situated on the line of the Canadian National railways between Winnipeg and Edmon­ton, via Saskatoon and North Battleford, has a population of about 200. All lines of 'business essential to the needs of a farming community are represented here. The shipping facilities are good and there are five elevators with a total capacity of 285,000 bushels of grain. There is a daily passenger and mail service to both east and west.

Only about four per cent. of the township is under cul­tivation. Rough surface and inferior soil are the chief reasons for this small amount of development. On the northeasterly ten or twelve sections of this township there is a fairly heavy covering of 'bush consisting of poplar and willow brush with large and small areas of dead and green poplar from four to ten inches in diameter and a few areas of dead and green jackpine to eight inches. In sections 23, 24, 25 and 26 of this area there are swamps with dead and green spruce and tamarack to eight inches in diameter. The remainder of the land is somewhat open, with scattered young poplar and willow brush, and scattered bluffs of pop­lar from two to six inches in diameter. Most of this land is sufficiently open for grazing, for which purpose it is at present being used.

There are a number of small lakes into which a large amount of the surplus water drains. Most of these have outlets into streams draining to the North Saskatchewan river. The surplus water from more than one-half of the township collects in low areas forming numerous small and large sloughs.

The soil in this township varies considerably and four main types occur. The soil of sections 13, 14, 23, 24, 25, and part of section 26 is yellow or brown sand. 'Sections 1, 2, 3, 4, 5, 9, 10, 11, 12 and parts of sections 6, 16 and 17 have mixed areas of black sandy loam, black fine sand, and yellow or brown sand. The northerly tier of sections have mixed areas of grey fine sandy loam, grey clay loam and grey sandy clay, and there are scattered areas which are stony. On the remainder of the township the main soil type is black fine sandy loam from four to six inches deep, interspersed with areas of clay 'loam and clay and with many stony ridges and stony slopes.

The settlement of this township was begun in 1909 and at present only about one-third of the land is occupied, most of which is used as 'private pasture. Most of the settlers in this locality are Scandinavians.

Because of the small amount of land being cultivated the grain crop is small. Wheat and oats are grown for grain and oat greenfeed for fodder. A limited amount of hay is secured from the low slough areas, which frequently 'dry up and produce fair hay. The 'hay thus secured and the greenfeed are supplemented by straw and together com­prise the winter feed. Because of the heavily rolling and hilly country the district is favourable for a winter range for stock, and as a consequence a great many horses are wintered here.

The settlers are engaged in mixed farming. 'Cattle, hogs and horses are the chief kinds of stock kept.

There is an abundance of wood for fuel, chiefly poplar. This wood when properly dried burns well and is con­sidered satisfactory.