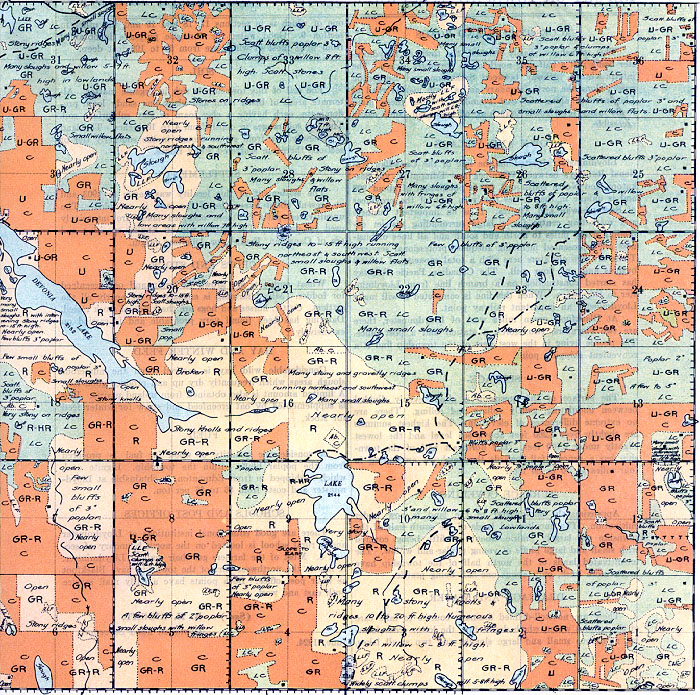 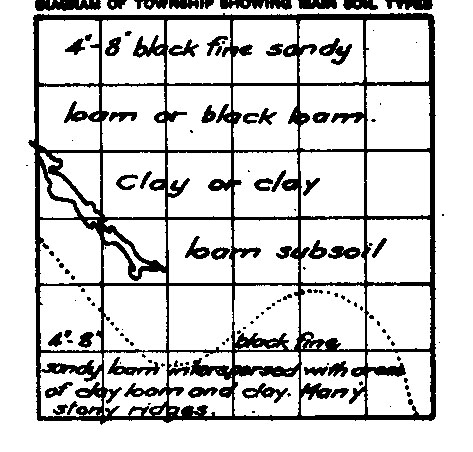 REPORT ON TOWNSHIP 49, RANGE 1, WEST OF THE. FOURTH MERIDIAN
ACCESSIBILITY AND ROADS
This township is easily reached, the town of Lloydminster being just a half-mile north of its northeast corner. The interprovincial highway between Saskatoon and Edmonton passes along the north boundary and a main market road to Lloydminster along the east boundary. From these main roads many local roads branching off make all lands easily accessible.
TOWN AND VILLAGE
Lloydminster, situated on the line of the Canadian National Railways between Winnipeg and Edmonton, via Saskatoon and North Battleford, has a population of about 900 and is unique in that it lies purtly in each of the provinces of Saskatchewan and Alberta. It is an important business and marketing centre for a large surrounding district extending many miles to north and south and all lines of business are represented including adequate professional services. There are five elevators here with a total capacity of 140,000 bushels and one flour mill. The Canadian Pacific Railway has started construction on a branch line from Lloydminster to Edmonton. When this line is completed it will make Lloydminster an important railway point.
At Blackfoot, seven miles west of Lloydminster, there are two elevators, two stores, a station and a post office. The people living in the west part of the township find it a convenient shipping point.
SURFACE
The surface of this township is about evenly divided between undulating, gently rolling and rolling. There are no extreme differences of elevation. The highest summits are slightly over 2,200
feet above sea level and the lowest slightly under 2,100 feet. The northeast half of the township has a general fall towards the northeast amounting in four miles to 70 or 80 feet. j
SURFACE COVERING
Approximately one-quarter of the land is now under cultivation. The uncultivated lands of the south half of the township are largely prairie, about one-fifth being covered with small and large bluffs of young poplar and willow. The uncultivated lands of the north half of the township have much more bush, only about one-half being prairie.
DRAINAGE AND WATER
There are no well-defined drainage courses to take care of the surplus water, which drains into the lower areas forming numerous small and large sloughs and two small lakes, one of which is in sections 17, 18 and 19 and the other in section 9. Good water for domestic purposes is obtained from wells most of which are from 50 to 100 feet deep.
SETTLEMENT
The settlement of this locality was begun in 1903 and at present about five-sixths of the land is occupied. The uncultivated parts of these occupied lands are intensively used for pasture. The settlers are all English-speaking and are of Canadian, English, or American origin.
CROPS AND STOCK
Wheat and oats are grown for grain and oat greenfeed for fodder. Mixed farming is engaged in by nearly all the settlers. Cattle, horses
and hogs are the kinds of stock raised. Dairying has been found very profitable and is carried on extensively.
HAY AND WINTER FEED
Considerable wild hay is secured from the numerous slough areas which frequently dry up and produce good hay. A limited amount is also obtained from upland prairie. Hay is suppleme6ed by oat greenfeed and straw for winter feed for stock.
FUEL
A considerable quantity of wood for fuel is procured from the poplar bluffs within the township. Lignite coal, which is shipped in from Edmonton, is obtainable at Lloydminster and costs from $6 to $8 per ton.
SOIL
The soil of this township is rich in organic matter. Alternate areas of black loam and black fine sandy loam pre- dominate, each having a clay loam or clay subsurface soil. The top soil ranges in depth from 4 to 10 inches. The land is generally free from stones though in the southerly tier of sections there are scattered stony ridges.
SCHOOLS AND POST OFFICES
There are good educational institutions at Lloydminster and a rural school is located on the north boundary of section 8. Most of the farmers get their mail at Lloydminster. A few in the northwest part of the township have Blackfoot as their post office. Both points have a daily mail service both east and west.
(Sgd.)
R. H. KNIGHT, Dominion Land Surveyor.
June, 1924.