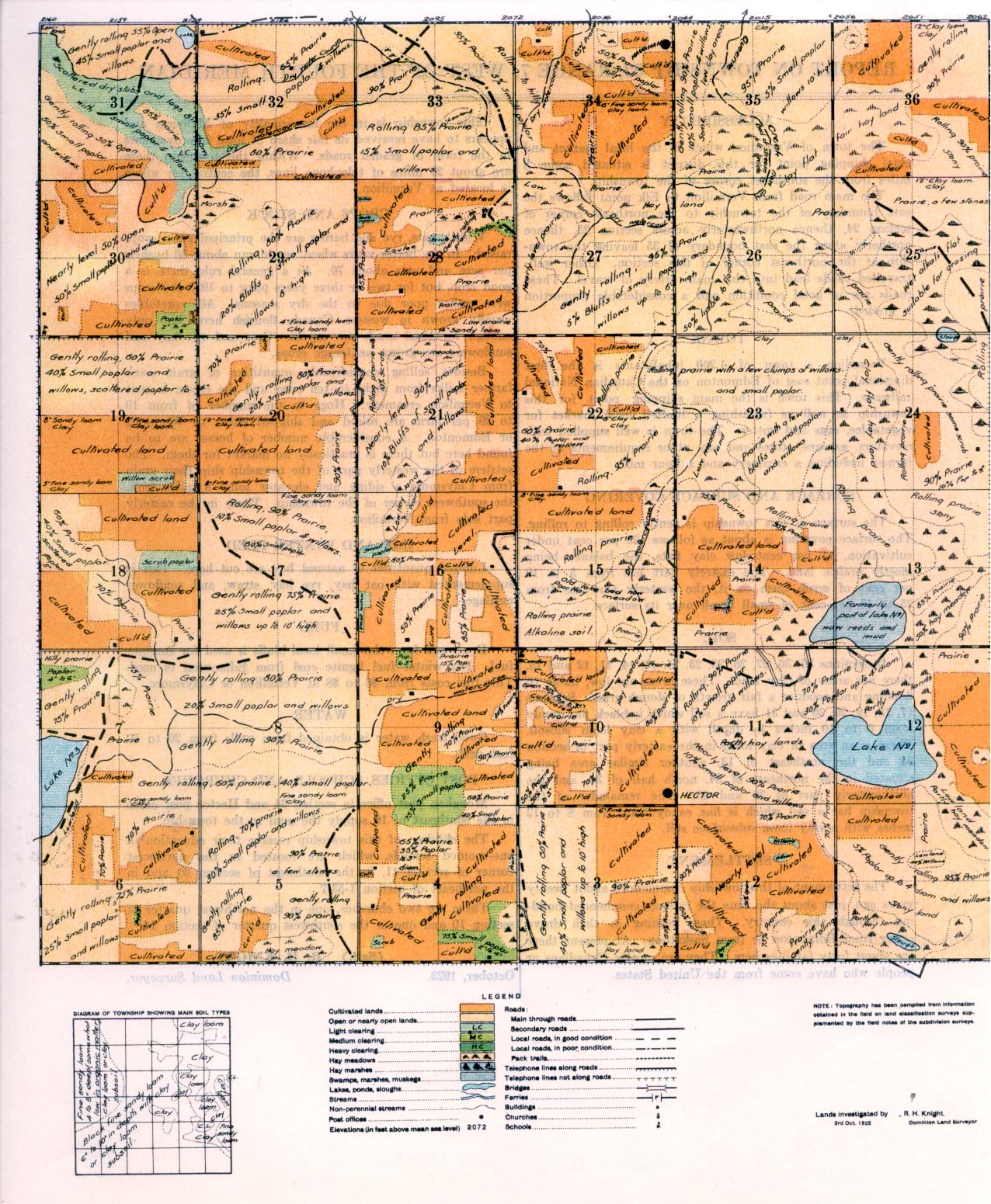 REPORT ON TOWNSHIP 52, RANGE 7, WEST OF THE FOURTH MERIDIAN

ACCESSIBILITY
The town of Vermilion which is the local market and chief shipping point for this district is situated some 8 miles from the southeast corner of the township.
The main road from Vermilion to Elk point follows the east boundary of the township to the northeast corner of section 24, thence northwesterly across section 25, thence northerly along the east boundary of 35 leaving the township at the northeast corner of this section. Other well-travelled roads lead into this main artery of travel. These roads are in good condition and a considerable proportion is graded.

TOWNS
Vermilion, a town of 1,200 inhabitants, is the first divisional point east of Edmonton on the Canadian National railways. This town is the main shipping point for this township as well as furnishing a limited local market for vegetables, eggs and butter. The town is well supplied with elevators, garages, stores and any other requirements of the farmer including a creamery and a flour mill.

SETTLEMENT
The settlement of this township commenced about twenty rears ago, just about the time the railway commenced building through this country. Those coming in then drove here from Edmonton or from Saskatoon. At present there are about forty families here. They are mostly Canadians or people who have come from the United States.
This township is in the municipality of Melberta and appears to have received its fair share of local improvements in the form of graded roads. Within the township there are about 29 miles of telephone lines, the central for which is located at Vermilion.

CROPS AND STOCK
Wheat, oats, rye and barley axe the principal grain crops raised. In the better years wheat would run about 30 bushels per acre and oats about 70. As a general rule there is a good crop, but for two or three years prior to 1923 the crops were rather poor due to the dry seasons. All vegetables usually grown in western Canada flourish here, but only enough for local needs are grown. Oats and rye hay and sunflowers are grown as forage crops.
Besides selling considerable quantities of grain each farmer milks from eight to ten cows and the cream is sent to Vermilion
creamery. Hogs to the number of from 10 to 20 per farm are raised and shipped either to Winnipeg or Edmonton. A considerable number of horses are to be found here but there is practically no market for them. The settlers in the westerly part of the township ship their grain from Claysmore a siding and elevator some 8 miles from the southwest comer of the township. Those in the easterly part ship from Vermilion.

FUEL
Dry wood from the small local bluffs is used for summer fuel. For winter fuel lignite coal from Edmonton is used. 17his fuel costs from $6 to $8 at Vermilion or Claysmore.

WATER
Good fresh water is obtained from wells from 20 to 50 feet deep.