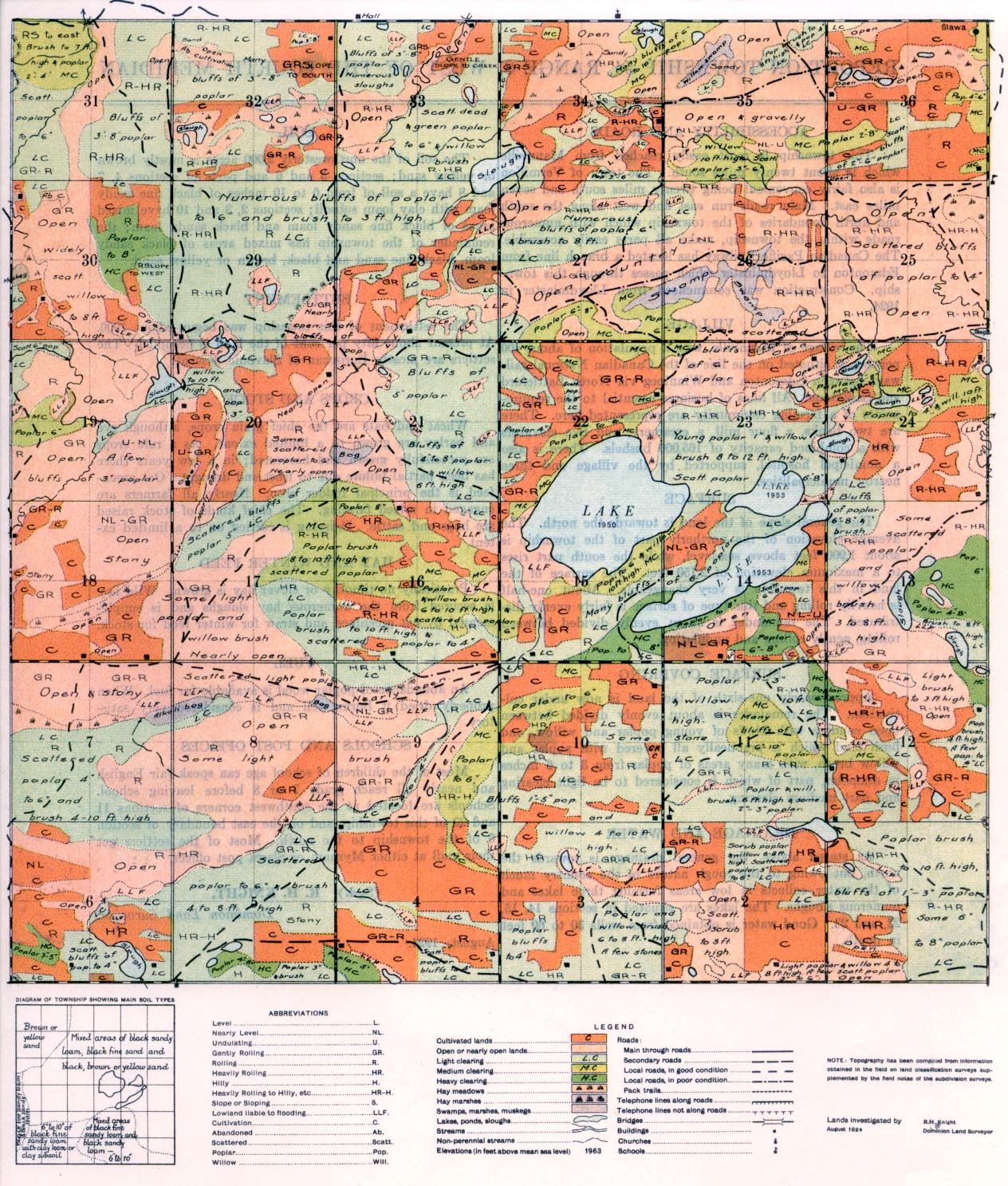 REPORT ON TOWNSHIP 53,RANGE 8, WEST OF THE FOURTH MERIDIAN

ACCESSIBILITY
This township is remote from railway and shipping facilities. The town of Vermilion is about 19 miles from the southeast corner, and Mannville is about 14 miles from the southwest corner of the township.
The settlers in the easterly half of the area use Vermilion as their town, while those in the westerly half use Mannville. Good roads lead to both places from the northeast comer of 35-52-8 and along the west boundary of the township respectively.
Within the township and around its boundaries there are 43 miles of well-travelled roads and 13 miles of little used roads. About 20 per cent of these roads are cross country trails. About 50 per cent of the remainder are graded roads.

TOWNS AND VILLAGES
The population of Mannville is about 400. All lines of -business essential to a farming community are fairly well represented here. In particular the town can boast of a weekly newspaper, two banks, five elevators, one flour mill and a creamery. The Mannville municipal hospital, supported by the village and three municipalities, is located here.
Vermilion, which is a town of about 1200 population, and is a divisional point on the railway, is the nearest market town.
Situated here are practically all the conveniences that the average settler requires. There is a hospital, a creamery, a flour mill, also banks, elevators, garages, hotels, stores and feed barns.

SURFACE AND SURFACE COVERING
With the exception of three quarters which are described as hilly, the township varies from nearly level, gently rolling to rolling.
The surface covering is about as follows: 20 per cent is cultivated, 30 per cent is light brush, 12 per cent is poplar 4 to 6 inches, 31 per cent prairie and 7 per cent is water. Lake Emilien has an area of about 1,400 acres and Lake Hivon takes up somewhat more than a quarter-section.

SOIL
Section 36 and part of 25 and 35 have a fine sandy loam soil to a depth of from 8 to 12 inches over sandy loam subsoil, interspersed with areas of candy loam, The greater part of the remainder of the northerly third has a soil which is fine sandy loam from 6 to 12 inches deep with a sandy loam subsoil. The remainder of the township may be described as sandy clay loam with areas of clay loam and clay with a clay subsoil. The soil is whitish in colour as the clay is near the surface. The organic matter has to a considerable extent been destroyed by fire.

SETTLEMENT
This township was settled just about the time the railway was completed. The original settlers were Europeans, mostly Austrians or Russians, who had been engaged on the construction of railways.
This township is in the municipality of Ukraina and appears to have received its fair share of road improvements. The township has about 8 miles of telephone lines in and around it.

CROPS AND STOCK
Wheat, oats, barley and rye are grown here, and with the exception of two or three dry years just prior to 1923 they -have given good returns from the land. All vegetables common to western Canada are grown here successfully, but only in sufficient quantities for local consumption.
Each settler has enough horses for his own use besides a few in, excess of his needs. Each milks about eight cows and ships the cream to Mannville or Vermilion. Besides these milk cows they -have about twenty head of young cattle. About ten or twelve pigs are kept on each farm. Hens, turkeys, geese and ducks are raised and shipped to Edmonton.

HAY AND WINTER FEED
Limited quantities of wild hay are cut in the small sloughs throughout the township. This hay is supplemented by rye hay, oat straw and oat sheaves.

WATER
Lake Emilien, lake Hivon and other smaller lakes, ponds and, sloughs supply an abundance of water for range stock. The settlers get the water for home use from wells which are from 20 to 35 feet deep.

FUEL
The settlers burn wood cut in the wooded, areas, and from the bluffs. The settlers haul limited quantities of this wood to the local towns and sell it for stove wood.

GENERAL
The township is rather remote from shipping facilities.
The soil is generally good, but on account of the wooded nature of the country is rather difficult to put under cultivation. Mixed farming is carried on, and as is customary in foreign settlements the women do most of the hard work. The settlers pay their way as they go.