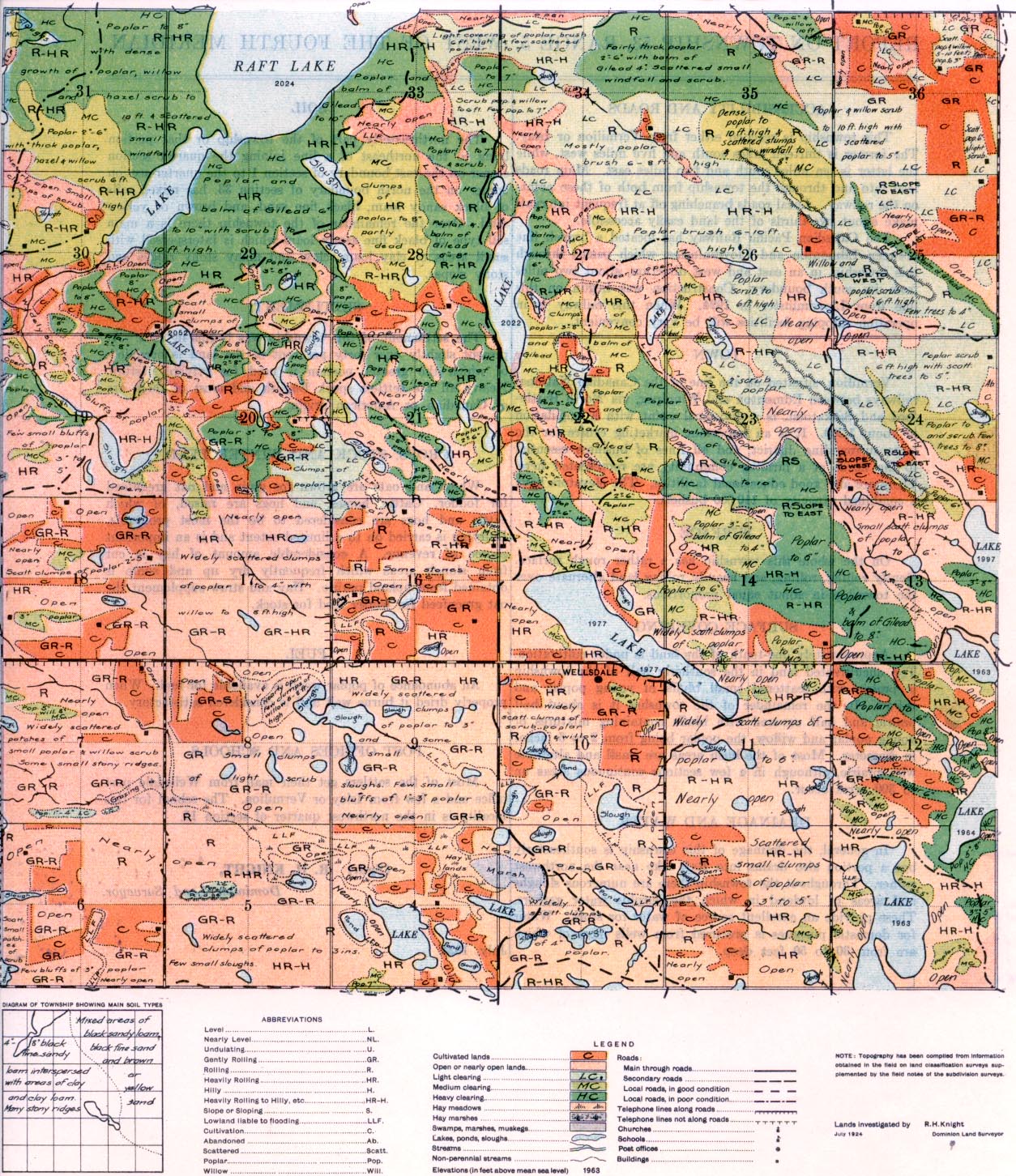 REPORT ON TOWNSHIP 53, RANGE 5, WEST OF THE FOURTH MERIDIAN

ACCESSIBILITY AND ROADS
This township is reached either from Vermilion or Islay. The former is thirteen miles south and five miles west, while the latter is ten miles south and two miles east. Main roads, lead into and through the township from both of these points on. the railway. Local roads branching off at frequent intervals make about two-thirds of the land easily accessible.
The Canadian Pacific Railway has located a branch line between Edmonton and Lloydminster, which passes through this township, in an east and west direction, about two miles from its south boundary. Construction was begun on this line from Lloydminster in 1924. When this railway is in operation shipping facilities will be very convenient.

TOWN
Vermilion, situated an the line of the Canadian National railways 'between Edmonton and Winnipeg, via North Battle- ford and Saskatoon, is a divisional point with a population of about 1,200. It is an important marketing centre for the large surrounding district, and all lines of business essential to the needs of a farming community are represented here. There are also good educational facilities. The elevators have a combined capacity of 110,000 bushels.

SURFACE
On the whole this township has a rather rough surface. Gently rolling, rolling, and heavily rolling land alternate over the township in about equal proportions.

SURFACE COVERING
Approximately one-tenth of the land is under cultivation. The uncultivated land in the southerly half of the township is prairie with scattered small bluffs of young poplar and willow. In the remainder of the township it is about half prairie and half covered with bluffs containing mixtures of young poplar and willow, the poplar being from 2 to 6 inches in diameter. Most of the bush areas are small and alternate with prairie, although in a few sections continuous areas up to 300 acres occur.

DRAINAGE AND WATER
In general, the drainage of this township is southeasterly but a portion also drains into Raft lake near the northwest corner. Throughout the township there are numerous sloughs and areas of lowland, in which the surplus water gathers. These provide tan excellent, source of water for stock. Water for domestic purposes is procured, from wells most of which are from 30 to 50 feet deep.

SOIL
The northeasterly part of the township or that portion lying to the northeast of a line joining the quarter section corner on the east boundary of section 1 to the quarter section corner on the north boundary of section 33, has mixed soils of black sandy loam, black fine sand, and brown or yellow sand. Over the remainder of the township there is a main soil type of black fine sandy loam which is interspersed with small areas of clay loam, clay, and many stony ridges and stony slopes.

SETTLEMENT
The settlement of this township was begun in 1906. At present slightly over forty per cent of the land, is occupied, of which the greater portion is used for private -pasture. Nearly all the settlers speak English and most of them are of Canadian or American origin.

CROPS, STOCK AND WINTER FEED
Wheat and, oats are grown for grain and oat greenfeed for fodder. Cattle, horses, and, hogs are raised, of which cattle and hogs are considered to be the most profitable. Dairying is carried on to a limited extent and, is an important source of revenue. A considerable amount of hay is cut from slough areas which frequently dry up and some is obtained from upland prairie. Hay and straw supplement the oat greenfeed for winter feed, for stock.

FUEL
An abundance of poplar wood, is available for fuel. When properly dried it burns well and is considered, satisfactory.

POST OFFICES AND SCHOOLS
Most of the settlers get their mail from Wellsdale post office and a few from Islay or Vermilion. The school for this locality is in the northwest quarter of section 15.